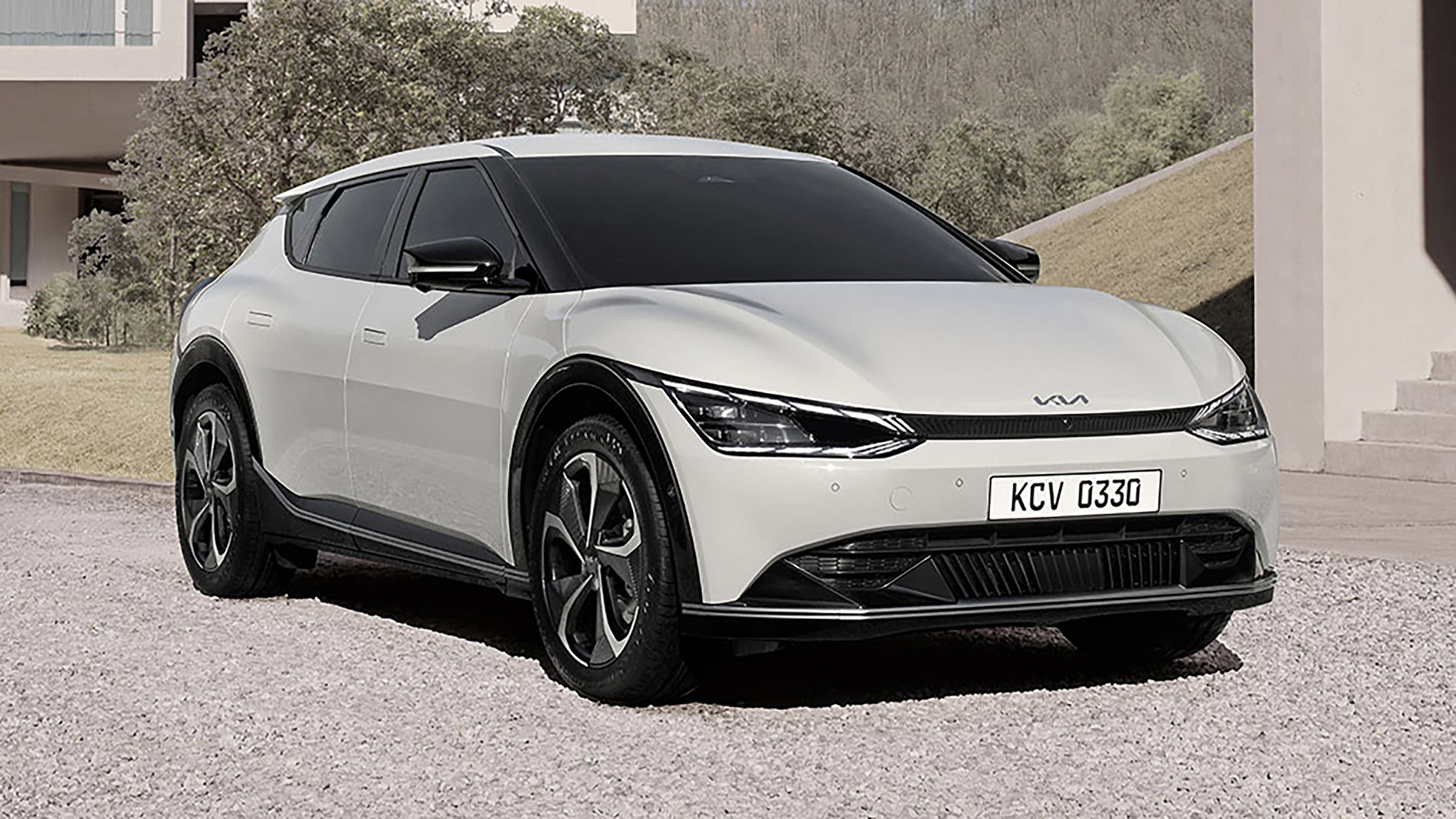 Kia has revealed its new electric only EV6 crossover, a car that ushers in a new design direction for the Korean brand, representing its “shifting focus towards electrification.” The Kia EV6 is the first in a line of new electric only cars as part of the brand’s Plan S business plan, which will see it launch seven new EVs by 2027, all of which will use the EV prefix.

The EV6 is Kia’s first car based on its new E-GMP electric car platform and we can see from the pictures that the front-end styling reflects its power source, with a very slim grille flanked by headlights that wrap around onto the front wings.

Kia calls this new design the “Digital Tiger Face,” an evolution of its previous Tiger Nose Grille for the electrified era. The EV6 will also be the first Kia to use the company’s controversial new logo.

Electric cars need very little airflow as the hardware doesn’t need cooling like a combustion-engined car. Despite the compact drivetrain, the EV6’s bonnet has a pronounced sporty-looking dome, flowing back to the heavily raked windscreen. The coupe-like roofline tapers to a chopped-off tail to help aerodynamic performance. The EV6 embodies Kia’s latest design direction under the philosophy of ‘Opposites United’. This is formed of five key design pillars that Kia calls: Bold for Nature, Joy for Reason, Power to Progress, Technology for Life, Tension for Serenity.

According to Kia, these five areas are the inspiration behind the EV6’s shape and proportions, the car’s feel and ambience, the evolution of the brand’s design strengths, its adoption of new technology and innovations (including the power source, of course), and the balance of the car’s look respectively. 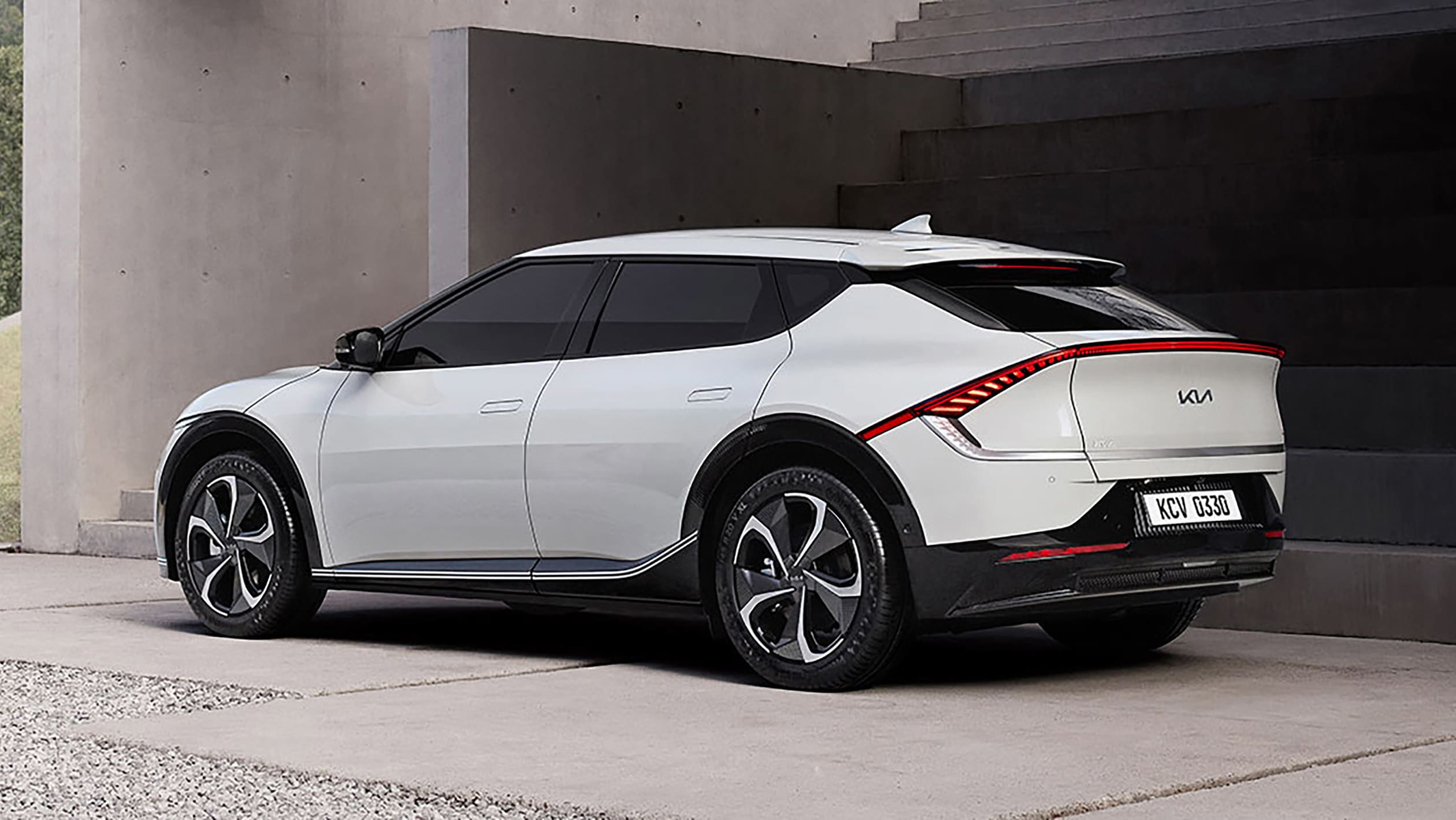 The EV6’s E-GMP underpinnings have also allowed Kia plenty of freedom with the interior design, as packaging has been optimised for the car’s battery and electric motor, freeing up more space inside.

One of the interior’s key elements is a new infotainment system, called the Audio Visual and Navigation (AVN) screen. This high-definition curved panel looks ultra-modern and evolves Kia’s infotainment further. Its current cars’ systems are strong, so we’re hoping for further improvements here, too. Along with the wide, curved screen, the slim dashboard houses a digital driver display and the climate controls, which use ‘buttons’ that give haptic feedback. Below the air-conditioning controls, the dash slopes away towards the front of the car “creating a sense of space and openness,” according to Kia.

The front seats are slim and lightweight, and trimmed in environmentally friendly fabric made from recycled plastic. Kia has moved leaps and bounds in design terms over the last 15 years since the brand hired designer Peter Schreyer in 2006. The German stylist revamped Kia’s line-up for the European market before leaving the brand in 2018, with Karim Habib, Senior Vice President and Head of Kia’s Global Design Centre, responsible for the new look.

“EV6, as the first dedicated Kia EV, is a showcase of human-centred, progressive design and electrified power. We strongly believe EV6 is a compelling and relevant model for the new EV market,” he said.

“With EV6 we aimed to create a distinctive, impactful design by using a combination of sophisticated, high-tech features on pure and rich volumes, while providing a unique space as a futuristic EV.” Kia’s new E-GMP architecture is the same as the underpinnings used by sister brand Hyundai’s Ioniq 5, so we expect the EV6 to have access to the same range of battery and electric motor options as the Hyundai.

This would mean the choice between a 58kWh and a 72.6kWh battery pack. An entry-level rear-drive single-motor set-up could offer 125kW and 350Nm in the EV6, while rear-wheel-drive single motor models featuring the big battery will likely offer 160kW and the same amount of torque.

Four-wheel drive as part of a dual-motor arrangement should also be offered; if it mimics the Ioniq 5 a version powered by the 58kWh battery will offer a 120kWp rear motor and 53kW at the front – plus a combined 650Nm – while the larger battery option should offer the same total torque output, with 155kW at the rear and 70kW at the front.

The longest range EV6 should deliver a maximum of around 500 kilometres cruising between charges.

This is where the E-GMP platform unlocks big benefits too, because with 800-volt electronic architecture the EV6 will accept up to 200kW charging. This means a 10-to-80-per-cent recharge in just 18 minutes, or around 100 kilometres of range added in as little as five minutes.