The Mercedes-AMG One hypercar looks to have entered the final stages of testing, with a road-registered prototype spotted out in public for the first time.

It has been nearly four years since Mercedes first revealed the 750kW-plus One, and development is said to have been beset by delays relating to the complexities of adapting its F1-derived hybrid powertrain for the street. But it seems the One could now be on track for a reveal in the coming months.

The latest images follow the recent release of an official video, which showed the long-awaited Ferrari SF90 rival – in its now familiar prototype livery – being driven at speed around a test track, and gives a closer look at its comprehensive aero package and cabin design. It also reveals that the One will join Mercedes-AMG’s 2021 Formula 1 racer in adopting the new ‘E Performance’ moniker, which will replace EQ Power+ as the designation for the brand’s upcoming performance hybrids.

The 750kW-plus all-wheel drive model, which uses a hybridised 1.6-litre V6 adapted from that of Mercedes-AMG’s championship-winning 2017 Formula 1 car, was originally due in early 2019. It is understood that date was pushed back because of engineering struggles that have included getting the complex powertrain to comply with WLTP emissions standards using a petrol particulate filter without compromising performance. 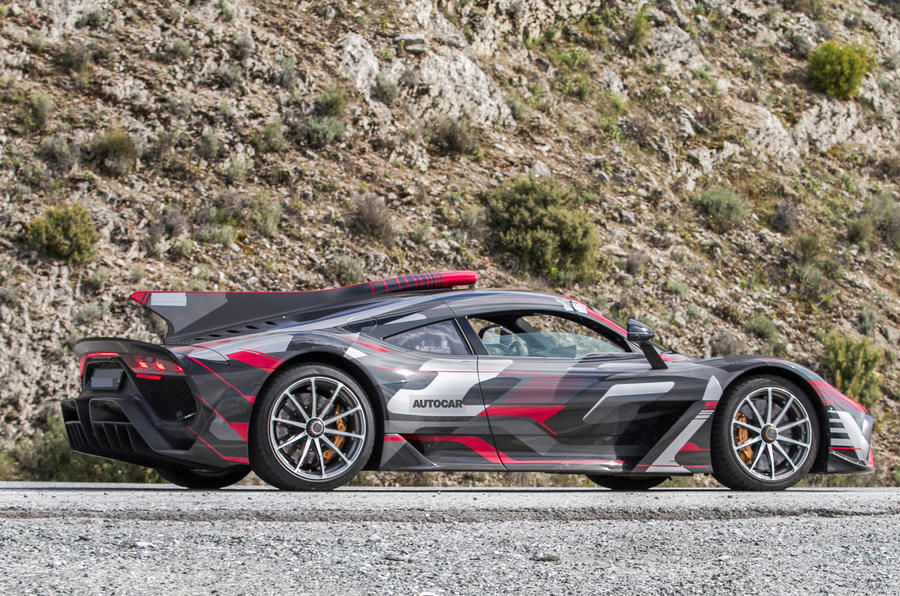 Development targets include the engine delivering “perfectly in terms of everyday performance” and being able to operate solely in all-electric mode for up to 25 kilometres. It is not yet clear if the car will be able to meet the concept’s performance claims of a 350km/h top speed and 0-200km/h in six seconds.

The firm is likely to attempt some sort of lap record at the Nurbürgring once tuning is complete. Further details of the One have yet to be given. However, customers have been told to expect their cars to be delivered “throughout” 2021. Mercedes-AMG One hypercar production to begin in 2022