Renault has released new teaser images of the Mégane E-Tech Electric, the firm’s first dedicated electric SUV, which is set to go on sale next year.

The French manufacturer revealed the boldly styled machine in concept form last year, with company boss Luca de Meo promising it was “95% what the production car will look like”. The concept was called the Mégane eVision, but a new release from Renault shows that it will take the E-Tech Electric name, using the sub-brand that encompasses all of the firm’s electrified cars. The three teaser images include a close-up shot of the car’s rear, showcasing Renault’s new retro-styled logo. The other two interior shots focus on showing the large, vertically mounted central touchscreen, along with the digital information display. The production styling of the Mégane E-Tech Electric – which is unrelated to the existing Mégane saloon and estate – was previously seen in spy shots of the Volkswagen ID 4 rival testing on public roads. Although the machine is wrapped in a camouflage livery, the narrow front headlights can be seen, and the machine also sits on large wheels. The cover of the electric charging port is also visible on the passenger-side A-pillar.

The side profile shows the crossover styling of the car, which de Meo said at the launch is intended to “reinvent the classical hatchback in an emotional way”. 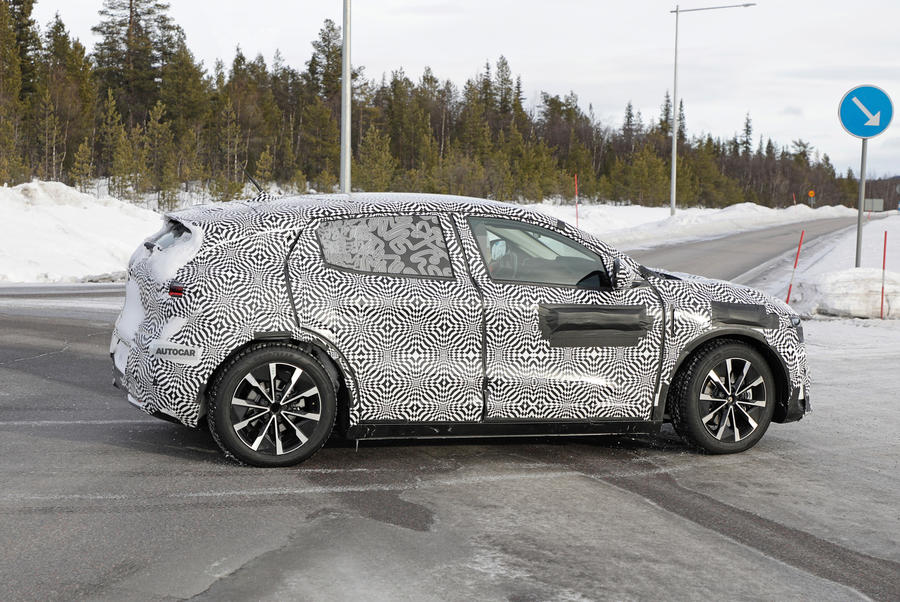 The Mégane eVision will be Renault’s first EV built on the Renault-Nissan-Mitsubishi Alliance’s new CMF-EV platform, which will also be used for the forthcoming Nissan Ariya SUV. The concept version featured a 60kWh battery offering a 450-kilometre range, and a 160kW electric motor driving the front wheels. As with the Ariya, the Mégane eVision will likely be offered with different battery sizes and with a twin-motor all-wheel-drive powertrain. The Mégane eVision will be a key part of a major Renault Group transformation plan outlined by de Meo recently, with the firm committed to expanding its electric line-up and regaining ground in the profitable C-segment market. The use of the Mégane name is designed to help link the new model to past Renault machines, and it will be sold alongside the unrelated current combustion-engined Mégane.

The Mégane eVision is set to be produced at Renault’s Douai plant in France, alongside the reinvented electric 5 hatchback that the firm recently unveiled.