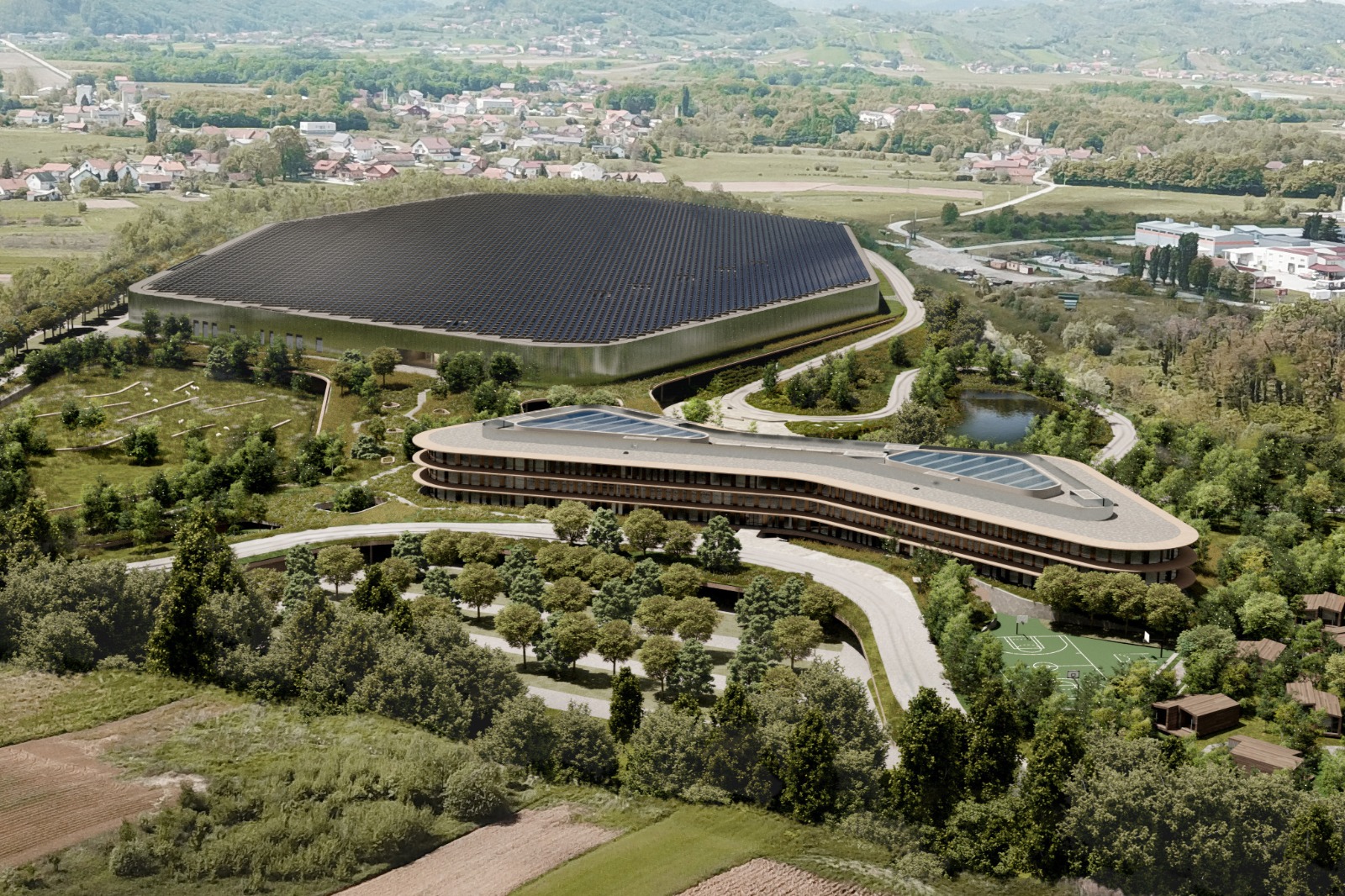 EV specialist Rimac has revealed its plans for a AUD$310 million new base in Croatia, claiming the site will transform it into a high-volume maker of drivetrains and batteries.

Construction is set to begin on the outskirts of Zagreb later this year, and it’s expected to open in 2023. Featuring two separate buildings for research-and-development and production, there’s space for more than 2500 employees and a long list of facilities that will make it a “unique, spectacular place”.

Designed by Croatian architecture firm 3LHD, the headquarters will include a test track, a battery-testing-and-production facility, a command centre, staff relaxation lounges, a restaurant, a gym, a games room, a showroom, a museum, a kindergarten and individual accommodation ‘pods’ to host visitors overnight.

Efforts have been made to ensure that the project – one of the largest of its kind in Europe – blends into the surrounding landscape. A roof garden, an ‘urban swamp’ and parkland complete with grazing farm animals have been included in the plans.

“Just 10 years ago, this company was only me sitting in my garage and thinking about the best ways to develop electric performance vehicles and components,” said founder and CEO Mate Rimac. “We have now reached a point where we need to build our long-term home in Croatia, and that’s exactly what the Rimac Campus is.

“The top priority of the project was to create the best possible working environment for our employees and to allow visitors and the public to enjoy the space and mix with Rimac employees. “The Campus is our springboard to the growth plans we have over the next decade and beyond, strengthening us as niche hypercar maker, a leading tier-one supplier of electric performance technology to the world’s largest automotive manufacturers and an early mover in the worlds of autonomy and mobility.”

As Rimac is part-owned by Hyundai, Kia and Porsche, provisions have been made for ‘top-secret’ project rooms in which to undertake work for other companies. The base will be entirely carbon-neutral, the company claims. Founded in 2009, Rimac has built a reputation as a maker of some of the fastest electric hypercars in the world, albeit in extremely low volume. The Concept One made its production debut in 2016, and was followed by the lighter and more powerful Concept S.

Its latest creation – the 1408kW C_Two – is due to be delivered to customers in 2021. In addition, Rimac is supplying the powertrain to be used in the upcoming Pininfarina Battista.

New partnership with Rimac secures Bugatti EV powertrains, but hybrid tech will allow W16 to live on. Bugatti will diversify its line-up and usher in...
Read more

The Bugatti Rimac company will operate from a new multi-million-dollar Rimac Campus from 2023. Electric hypercar company Rimac and Bugatti have announced the creation of...
Read more

Doom-mongering aside, just at a time when going quickly on the road is frowned upon more than ever, we're entering an era when unprecedented power will be unleashed
Read more