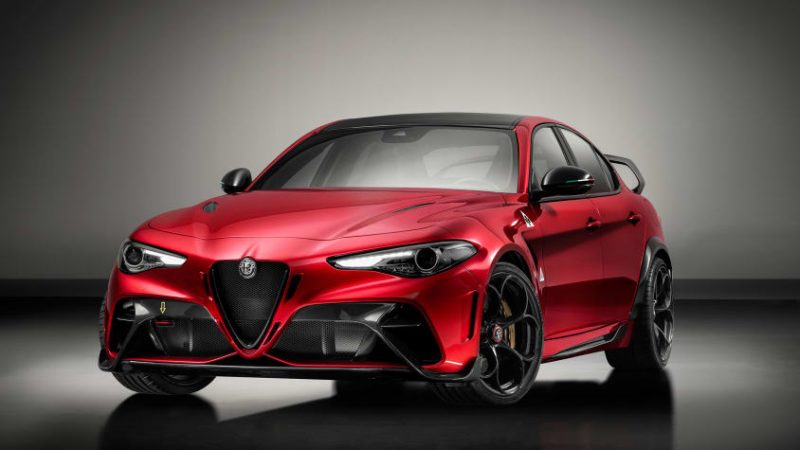 Alfa Romeo has officially revealed the Giulia GTA, a new limited-edition version of the Giulia Quadrifoglio that’s lighter, faster and more track-focused than ever before. Limited to just 500 units, the GTA has been designed in celebration of Alfa Romeo’s 110th anniversary, bringing back the iconic Gran Turismo Alleggerita name in the process

The powertrain is familiar from the current Quadrifoglio, featuring the same basic 2.9-litre 90-degree twin-turbocharged V6 engine, paired to an eight-speed automatic transmission and rear-wheel drive. Power is up slightly over the standard car, with 375kW compared to 375kW in the standard model, that in part is raised by the fitment of a new Akrapovič titanium exhaust system that finishes via two large central exhaust pipes.

The GTA’s focus is more pointed towards lowering the Quadrifoglio’s weight figure by a further 100kg, resulting in a dry weight of around 1520kg says Alfa Romeo. To do this, Alfa has expanded its use of carbonfibre, adding to the Quadrifoglio’s bonnet and wings with a carbon boot, driveshaft, front bumper, rear arch extensions and bucket seats. Alfa Romeo has also revealed the GTAm, which takes the weight saving yet further by replacing the rear seats with a half roll-cage, and fitting a high-set carbon rear wing and extended front splitter. Alfa’s engineers have also paid attention to the dynamic package, widening the wheel tracks by 50mm, which are covered by bespoke front wings and rear wheel spats. The wheels, despite a familiar cloverleaf design, are now a centerlock design. New springs, shocks and bushes are also fitted, all designed specifically to make the GTA as agile and fun to drive as possible.

Inside, the changes on the GTA are limited to a new part-carbon steering wheel design, a matte carbon finish on the centre console and dash, an updated control set and gearlever borrowed from the latest 2020 model year Alfa Romeo Giulia, and lots of Alcantara wrapped across the dash, door cards and lower console.

Despite the name having been utilised in the early 2000s on some warm, front-wheel-drive 156s and 147s, the GTA badge instead refers back to the small, two-door coupe built between 1965 and 1969, where it lived on a shortened, lightened homologation version of the Giulietta designed for Autodelta, Alfa’s motorsport division, to compete in touring car racing series.

This new Alfa Romeo GTA won’t be one such homologation special, but we suspect it will have plenty of specialised features and elements that will make the standard Giulia Quadrifoglio’s dynamic package even more aggressive.