The new 2020 BMW M8 Competition promises to be many things, but does its $350k price tag stack up against some very fine competition? Our full review.

The M8 is now just one of a vast array of BMW’s M cars – although it’s a ‘proper’ M rather than a car with a conventional BMW name and an ‘M’ prefix.

If you’d been able to visit the M part of BMW’s website before websites existed, it would have consisted of a couple of models at most. Today, there are more than 20.

Even the M8 has three different bodystyles – coupe, four-door saloon and convertible – and a non-Competition variant available overseas, but not in Australia. This, the M8 Competition Coupe, feels like the most natural, traditional M of the various Eights, then – a two-door vehicle with a rigid shell and as much power as you’ll find in a modern M. That means 460kW driving through all four of its wheels, or just the rears if you decide to flick the correct switches, of which, as we’ll learn, there are rather a lot. For this amount of power, BMW asks you $352,900 before on-road cost, although even at this price it’s possible to add a few more dollars.

For this kind of outlay, then, there are loads of alternatives – everything from a Porsche 911 to a Bentley Continental GT to an Aston Martin Vantage and lots else in between. Here comes the best test in the business to see if the M8 is the best grand touring sports coupe. Given the 8 Series is all but the length of an executive car on the outside, you might expect it to be quite a roomy car inside. And you’d be wrong, away from the front seats, at least. You can fit occupants in the rear chairs – although not a very big one behind an occupied driver’s seat – but this is very much a 2+2. That’s not necessarily unusual in this class, and it’s more accommodating than a 911, say, but it’s worth bearing in mind. There’s a 420-litre boot behind, with an opening wide enough to accommodate an obligatory golf bag. 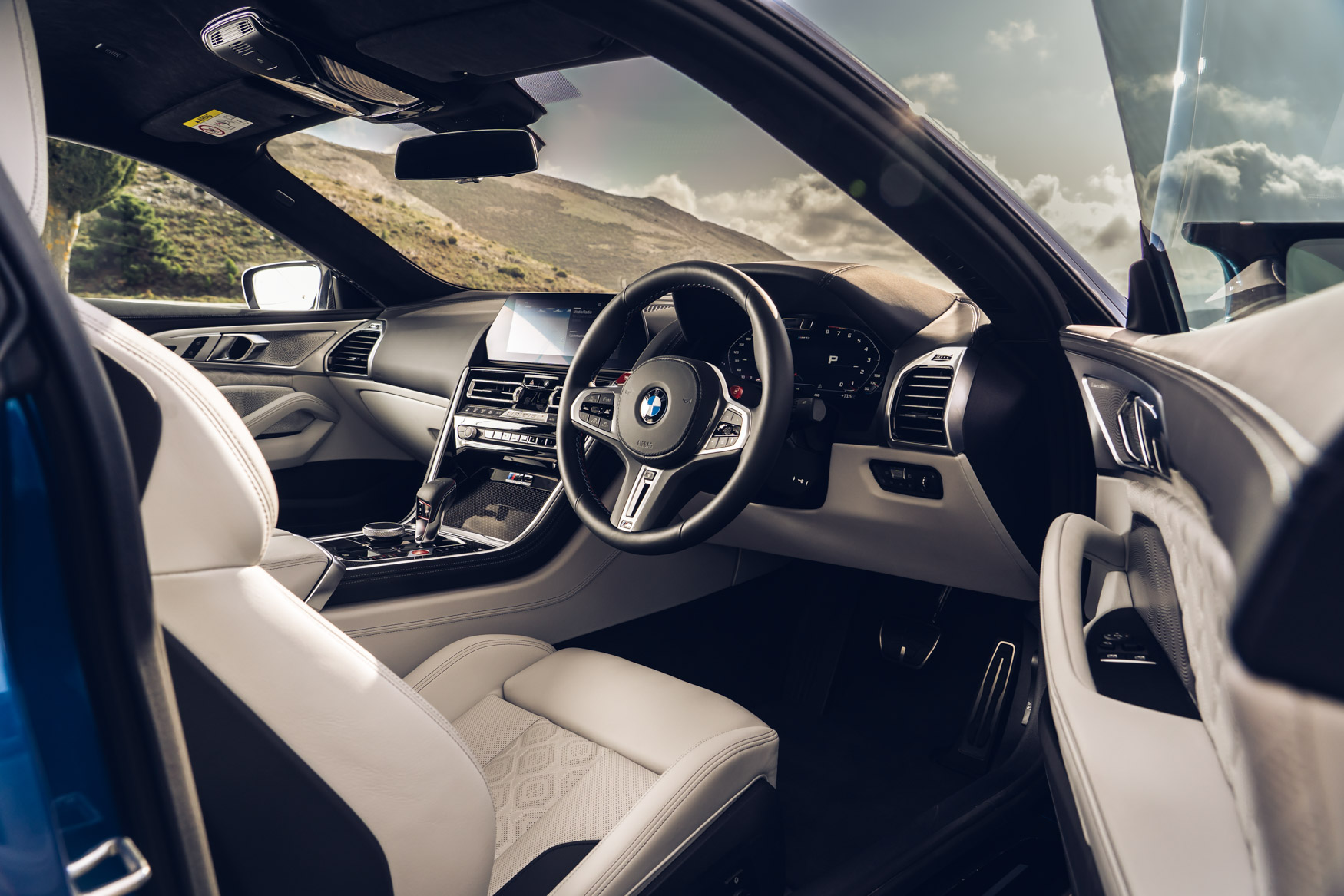 The front two occupants are well catered for, at least, with a pair of multi-way electrically adjustable, lavishly finished and accommodating seats that remain comfortable over distance yet provide good lateral support. BMW’s driving environment – a widely adjustable driving position, with a round wheel that you can pull close to your chest and pedals and seat laid out straightly – suits a low-slung GT car.

BMW has a large car platform that underpins its big vehicles – 5, 7 and 8 Series. They have an engine in the front, mounted longitudinally, and variously drive the rear or all four wheels.

Given power outputs starting with a six are common not just to the BMW M8 but also the M5, which has a job to do as a family car as well as a super-saloon, it’s not surprising that four-wheel drive is the default for BMW’s most powerful.

The M5’s four-wheel-drive powertrain, 4.4-litre twin-turbocharged V8 and automatic gearbox are carried straight across with even the same power output – 460kW developed at 6000rpm and a fulsome torque figure of 750Nm developed with table-top flatness all the way from 1800rpm to 5800rpm.

We have driven the BMW M8 on circuit, and the nature of the performance is quite different from the one the figures suggest. Never – obviously – does it feel slow, but there is a subtleness and softness to the M8’s remarkable speed of the sort for which they practically invented velvet/iron glove/fist clichés. Turbo lag is notable for its absence, the eight-speed auto (a torque converter rather than a dual-clutch unit) shifts smoothly and sweetly and even the noise, augmented through the loudspeakers as it is, is on the understated side.

A few weeks ago we ran a feature on ‘Goldilocks cars’ and, you might wonder, occupying a space between pure sports cars like a 911 Carrera S and pure GT cars like the Continental GT, perhaps the M8 sits in a similar sort of place – if one is too hot or cold, maybe the M8 is just right?

Maybe, but probably not. The sports car basics are there: there’s a low amount of roll, the steering is precise and, on a track, as befits the Competition title but not necessarily the typical use of a five-metre-long GT car, the M8 can pull off some seriously impressive feats. It hides its girth well and the harder you push it, the more keenly it responds, up to and including the point where you can put it in rear-drive mode and treat it like a muscle car. Even with four-wheel drive retained, its behaviour up to its limit, and slightly beyond it, feels largely rear biased. But on the road – more likely the given location for a four-seat 1885kg car with Isofix child seat mounts – the BMW M8 is more wanting. There’s a reasonable amount of road noise – more than a 911, in our experience – and combined with it is a surprising and not entirely welcome firmness over any sudden vertical movements.

Out here, the way it disguises its mass at extremes isn’t just less noticeable: it’s less necessary, too. And we’d swap some of that for more compliance. Ultimately, driving it back to back with the aforementioned Bentley and Porsche alternatives, it’s not just the one with the ‘B’ on its nose but both alternatives that make better-riding cars.

That the BMW M8 can’t cope with the plushness of the Continental GT is understandable; but less so that you’d prefer a 911 to the M8 for a day-long road trip of many hundreds of miles. The BMW M8 is a car of hidden depths. Get it in the right location, get it into the right modes, and it’ll do things that you scarcely think are credible, given its mass and its size. And in its own way, that’s hugely impressive.

But for us, it’s not enough, especially at $350k, to become truly compelling. We’d like a car at that price to be more appealing, more frequently. As it is, though, there are pure GT cars that do the grand touring job more effectively (including BMW’s own M850i, an engaging and comfortable road car, incidentally) while there are sports cars that aren’t just more sporty but also just as capable and more cosseting than the M8 over distance.

Somehow, the BMW M8’s approach – be a little firm, do a little sportively – works better in the M5, perhaps because a super-saloon has the extra appeal of its greater interior space and has fewer direct or indirect rivals. When it comes to the M8, though, the circumstances in which it shows its best side are too narrow. Hidden depths, sure – but we’d like some more obvious ones.