The new Land Rover Defender is almost in Australia and you can pre-order now. This is what to expect if you are planning to one of the first to own a new Defender.

Over almost 60 years of production, we’ve seen the Series I, II and III models of the original Land Rover, followed by the legendary Defender version in 1983. Until production finally ended in 2016, the Defender remained somewhat familiar, only undergoing small tweaks and updates over the years without any sign of a replacement. The all-new Land Rover Defender 110 has now launched and it’s one of the most exciting new cars of 2020. It’s the first model in the new Defender line-up, with a three-door Defender 90 and a commercial version set to arrive soon.

The new Defender borrows several design cues from the original car, with a strikingly angular look and widened side flanks, combined with the supersized dimensions of a modern family-sized 4×4. A closer look at the styling reveals details such as the front and rear light clusters, the rectangular front grille that dominates the nose of the car, and the tailgate mounted spare wheel – all a clear tribute to the original. Step inside, and you’re greeted with a thoroughly modern interior that’s incomparable to anything else in the sector. There’s a blend of rugged and luxury materials dotted around the interior, with exposed screw heads, aluminium surfaces and a magnesium bulkhead stamped with the iconic ‘Defender’ nameplate. While it’s not the type of luxury you’d find in a Land Rover Discovery, it does have a cool look and feel.

One area in which the new Defender has moved forward massively is the onboard tech, with a slick digital instrument cluster, and a new 10-inch infotainment touchscreen, which is the best setup we’ve seen in a JLR car. Called Pivi Pro, it’s intuitive and easy to use and offers over-the-air software updates, Apple CarPlay and Android Auto smartphone connectivity, and music streaming. This setup also incorporates the car’s ClearSight Mirror, which acts as a traditional rear-view mirror and as a display screen showing a feed from a rear-mounted camera. For off-roading, the ClearSight Ground View system uses front-mounted cameras to project the view through the bonnet of the car, showing the terrain ahead via the dash-mounted infotainment screen.

The new Defender has also been designed with usability in mind, with a cavernous central storage bin and large door pockets. It can also be customised to suit your needs, with even a fridge on the options list. More practical features such as an extra front seat are also available, or if you wish, the removal of the central storage bin is also an option. 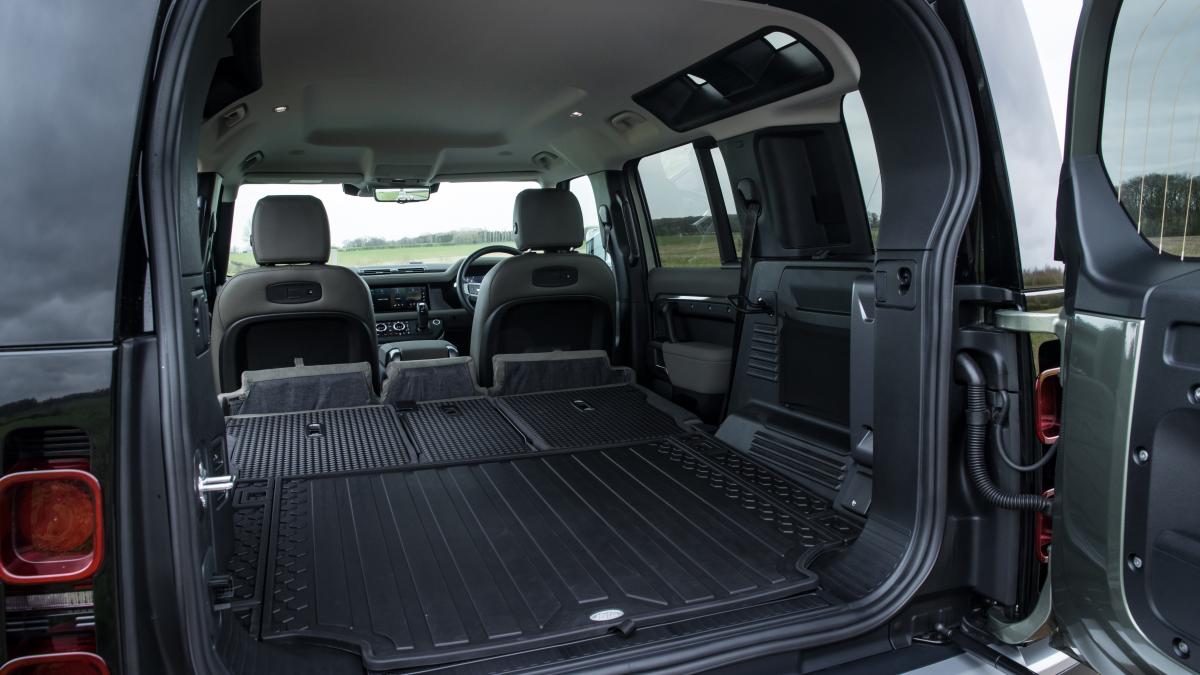 You can also add a pair of rear seats in the boot to make your Defender 110 a seven-seater, although this option cannot be combined with the third front seat. The rear seats boast plentiful amounts of space for passengers, sliding forward to allow access to the third row, which offers a decent amount of space for children and smaller adults. One piece of smart design is that every passenger gets their own power outlet and air vents. The car’s growth spurt means that boot space is excellent, with 231 litres with three rows of seating in place rising to 916 litres with two rows. A vast 2233 litres is available with all the rear seats folded into the floor.

Buyers can spec a Defender 110 in a range of trim levels ranging from the utilitarian S and SE models, all the way to the plusher HSE, First Edition and X models. If choosing a trim wasn’t difficult enough, Land Rover offers several optional packs, including Explorer, Adventure, Country and Urban, which add kit including roof racks, storage boxes and even a snorkel to ensure you can wade through deep water on the school run.

So, we’ve established that the design of the new Defender lives up to the iconic name, but how does it drive?

Our test car is an S trim model equipped with a turbocharged 2.0-litre four-cylinder diesel engine producing 177kW and 430Nm. You can opt for a lesser powered 147kW diesel as well, along with a petrol straight-six mild-hybrid producing 294kW and 550Nm, badged P400.

While JLR’s Ingenium D240 engine is available across the Land Rover lineup, it seems best suited to the Defender 110. Offering spritely acceleration considering this is a heavy car, it manages 0-100km/h in 8.7 seconds. Throttle response is good both around town and for motorway driving. The car’s stereo system can be used to enhance the engine noise.

And for those that think the Defender 110 is too similar to the Discovery, it’s clear from a short drive that both cars, despite sharing many similarities, are very different. The Defender 110 offers a hint more precision than the Discovery, with a sporty feel about it thanks to faster steering and a firmer air suspension setup. It also offers more feedback to the driver when cornering, with a surprisingly grippy front end. Even in faster corners, trying to unsettle the Defender 110 proved difficult, with it remaining flat and composed despite provocation. Land Rover has succeeded, rather unexpectedly given the car’s bulk, in making the Defender fun to drive.

At faster commuting speeds, the rectangular front-end does cause a bit of wind roar, but aside from this, it’s quiet and refined with a stable feel about it. Like the old car, the new Defender 110 can go where other cars can only dream of thanks to its twin-speed gearbox, locking centre and active rear locking differentials, and air suspension, which are all controlled by Land Rover’s clever Terrain Response technology. This setup is controlled by the infotainment touchscreen but can also be activated by a shortcut with a simple press of one button and the use of an air-con control dial – a clever way of decluttering the dashboard layout. Adding to the Defender 110’s already vast breadth of abilities is its towing ability of up to 3500kg. The car’s smartly designed tech comes into play here too, with rear-mounted cameras to help you line up a trailer, and air suspension that will lower the car and then raise it up to make coupling a breeze.

The new Defender 110 had a big name to live up to and it’s succeeded in all areas. The design, technology and engineering make it one of the most competent cars you can buy today. It’s unexpectedly fun to drive on the road, with all of the off-road ability you’ll ever need. Add to this the cool design and brilliant interior, plus a competitive starting price next to its direct rivals, and the new Defender looks like decent value for money too. Essentially, it’s everything we wanted the new Defender to be and more.

Can the facelifted Peugeot 3008 overcome the Skoda Karoq in this family SUV battle? Peugeot’s second-generation 3008 was the catalyst for the company‘s reinvention. It...
Read more
Facebook