Mercedes steps into the flourishing plug-in crossover segment with its second-generation GLA. Greg Kable delivers our first-drive review in a prototype model.

The GLA 250e is still in a final phase of development, which is why Mercedes bills it as a prototype. It joins four petrol and diesel models in a new second-generation GLA line-up, offering an electric range that is put at between 53 and 60 kilometres on the WLTP test cycle.

The starting point for the GLA 250e is the new GLA 200. The two models share the same transversely mounted turbocharged 1.3-litre four-cylinder petrol engine – a unit developed in a joint venture between Mercedes-Benz parent company Daimler and Renault. 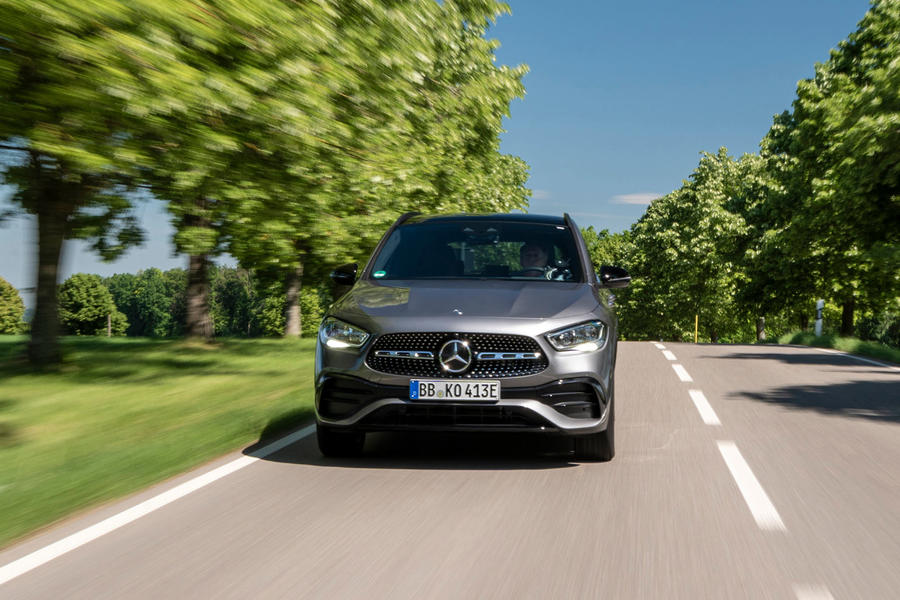 As in the GLA 200, the combustion engine develops 116kW and 249Nm of torque. But in combination with an electric motor delivering 75kW and 300Nm, the GLA 250e’s overall output is boosted to a combined 160kW and 450Nm – all channelled through an eight-speed dual-clutch gearbox to the front wheels.

There’s a bewildering array of driving modes, many of which the head of Mercedes’ compact car line-up, Jochen Eck, acknowledges will never be used by owners of the new model.

Electric mode serves up emission-free qualities, while a Battery Save setting allows you to operate the combustion engine to save the remaining battery charge for when you need it in low-emission zones and the like. There are also three hybrid modes – Comfort, Sport and Eco – and an Individual mode.

Inside, the GLA 250e is just like any other new GLA model, except the combustion engine doesn’t fire when you hit the starter button. Instead, it is programmed to start on the electric motor, so there’s no telltale exhaust noise of any kind as you set off. There are also some additional gauges within the digital instrument panel showing battery charge and electric range. 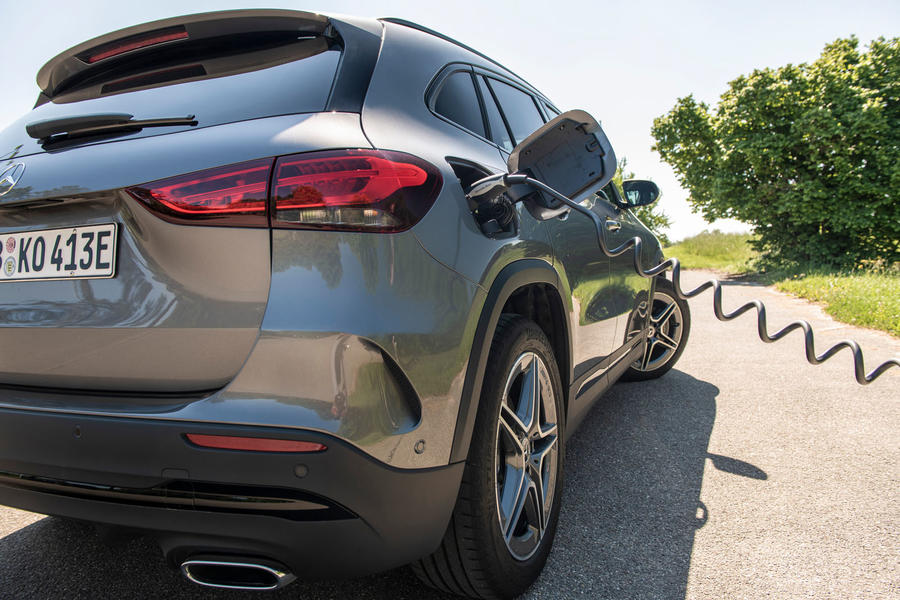 We’ve already noted the added maturity evident in the new petrol and diesel GLA models, and the same applies here. The hushed qualities of the GLA 250e’s drivetrain immediately appeal. In Eco mode, it is quick to switch to electric running and keep the operation of the petrol engine to a minimum, giving it quiet and relaxed qualities that make it perfectly suited to urban running.

With a 15.6kWh battery mounted underneath the rear seat, you can lay down meaningful distances on the electric motor alone when the battery is sufficiently charged. The step-off is quite sharp thanks to the instant torque qualities, resulting in spirited acceleration up to a limited speed of 140km/h despite the added weight.

As with the A250e which will arrive in Australia, the strong and instantaneous torque delivery in Eco mode can sometimes defeat the traction provided by the front wheels, leading to the odd spot of wheelspin before the electronic stability control system steps in as you accelerate hard out of roundabouts and sharp corners.

Switch into Sport and it delivers even stronger performance with the combined efforts of the combustion engine and electric motor endowing the new Mercedes-Benz model with an official 0-100km/h time of 7.1sec and top speed of 220km/h. 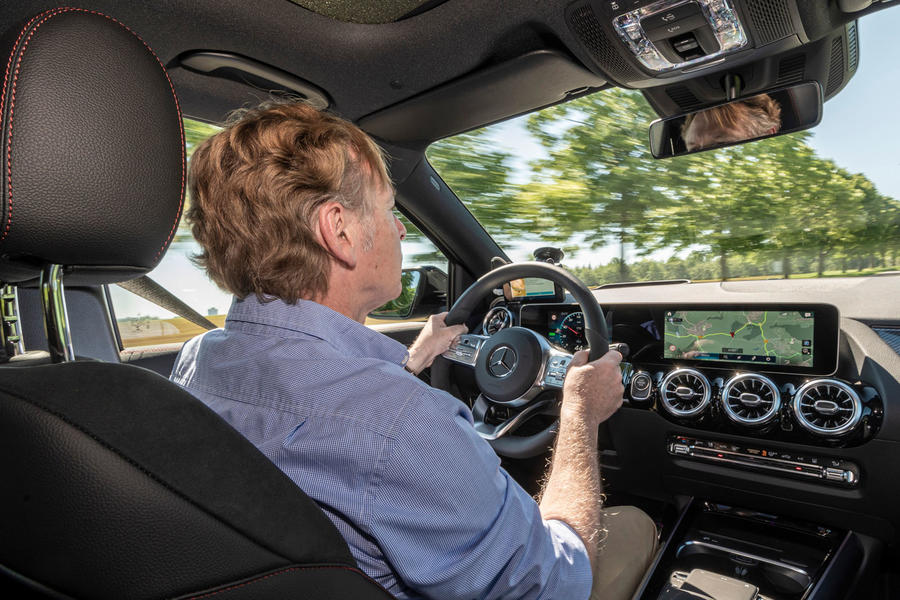 So configured, the latest in what is now a long line of plug-in hybrid Mercedes models is quite pleasing to drive on open roads; the combined torque of the petrol engine and electric motor makes for a highly flexible delivery that allows the GLA 250e to pull tall gears with quite a bit of vigour, even at low revs.

That’s just as well because the gearbox is programmed to shift up into longer ratios quite smartly to maximise economy at all times.

The key to extracting the most from the drivetrain, of course, is keeping the battery topped up as the basis for the operation of the electric motor.

Charging of the battery, via a socket mounted on the right-hand-side rear, can be carried out using either AC electricity at up to 7.4kW or DC at up to 24kW. The respective charging times are put at 1h 45min and 25min respectively.

The ride suffers from the extra weight brought on by the 150kg battery compared with other more conventional second-generation petrol and diesel GLA models; there’s greater vertical movement over pockmarked bitumen. That said, the firmer spring and dampers help provide the GLA 250e, which uses a torsion beam rear suspension like its various plug-in hybrid siblings, with admirable body control. The electromechanical steering is also light but engagingly direct in its action.

The packaging of the battery underneath the rear seat has reduced the size of the petrol tank to just 44 litres. However, boot capacity remains virtually unchanged from other new GLA models.

Our time with one of Mercedes-Benz’s final GLA 250e prototypes was limited. Despite this, our first impressions are quite positive. Its performance in both electric and hybrid running is fairly strong. There’s a feeling of deep-seated engineering integrity about its complex drivetrain that impresses, whether tooling around town or out on the open road. Its ride is perhaps not quite as settled as other GLA models, but it does offer a range that will get most commuters to and from work on electric power alone. 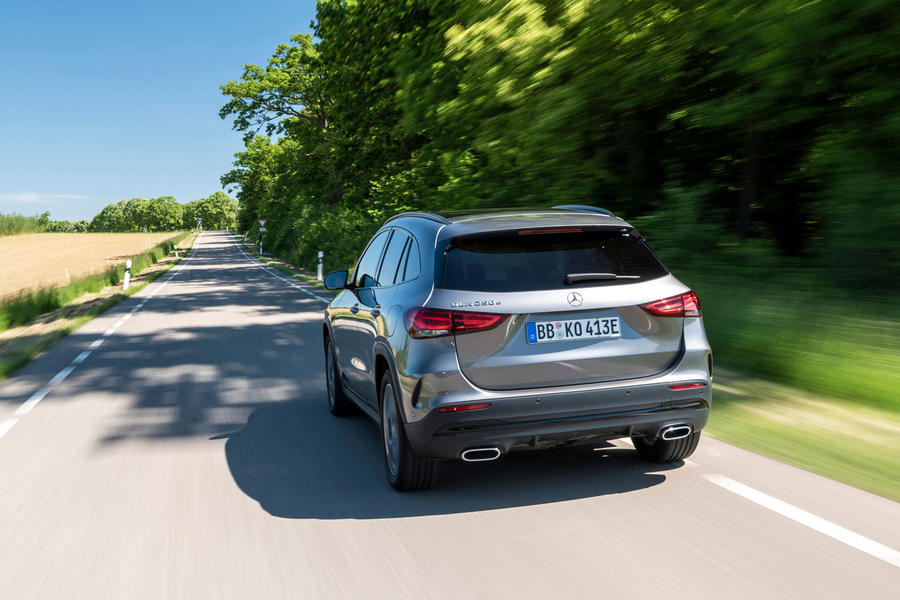