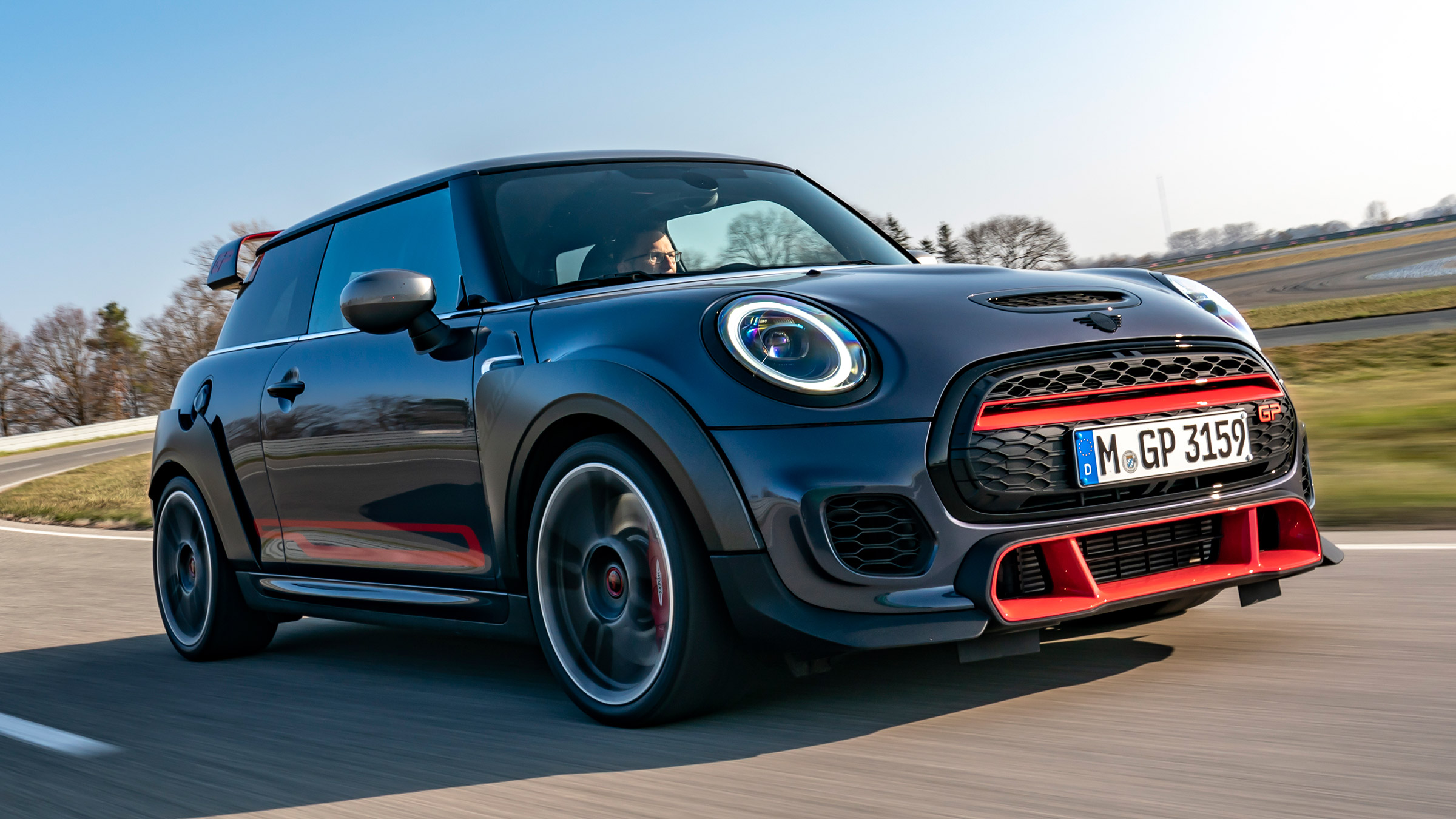 You can tell at first glance that this is no normal MINI. The aggressive bodykit, flared arches and striking double wing perched on the roof immediately indicate you’re looking at something rather more complex and sophisticated than a standard three-door Cooper S. A glance through the window confirms it; there are no back seats.

It’s not surprising to find that this pumped-up MINI bears the ‘GP’ name – Grand Prix. It’s only the third time the British firm has applied the GP badge to one of its models; in 2006 and 2013 MINI launched its hottest versions, which both came with supercharged 1.6-litre engines, to 2000 customers. This time 3000 MINI John Cooper Works GP models will be made, but only 74 of those are earmarked for Australia.

And what those lucky buyers will be getting is the fastest ever MINI. In fact, it’s one of the most extreme cars MINI has ever produced, as Jurgen Metz, head of driving dynamics MINI John Cooper Works, told us: “We wanted to keep the main character of the two predecessors: pure, unfiltered driving fun with a touch of ‘feels like a race car’.” This is a serious piece of kit. 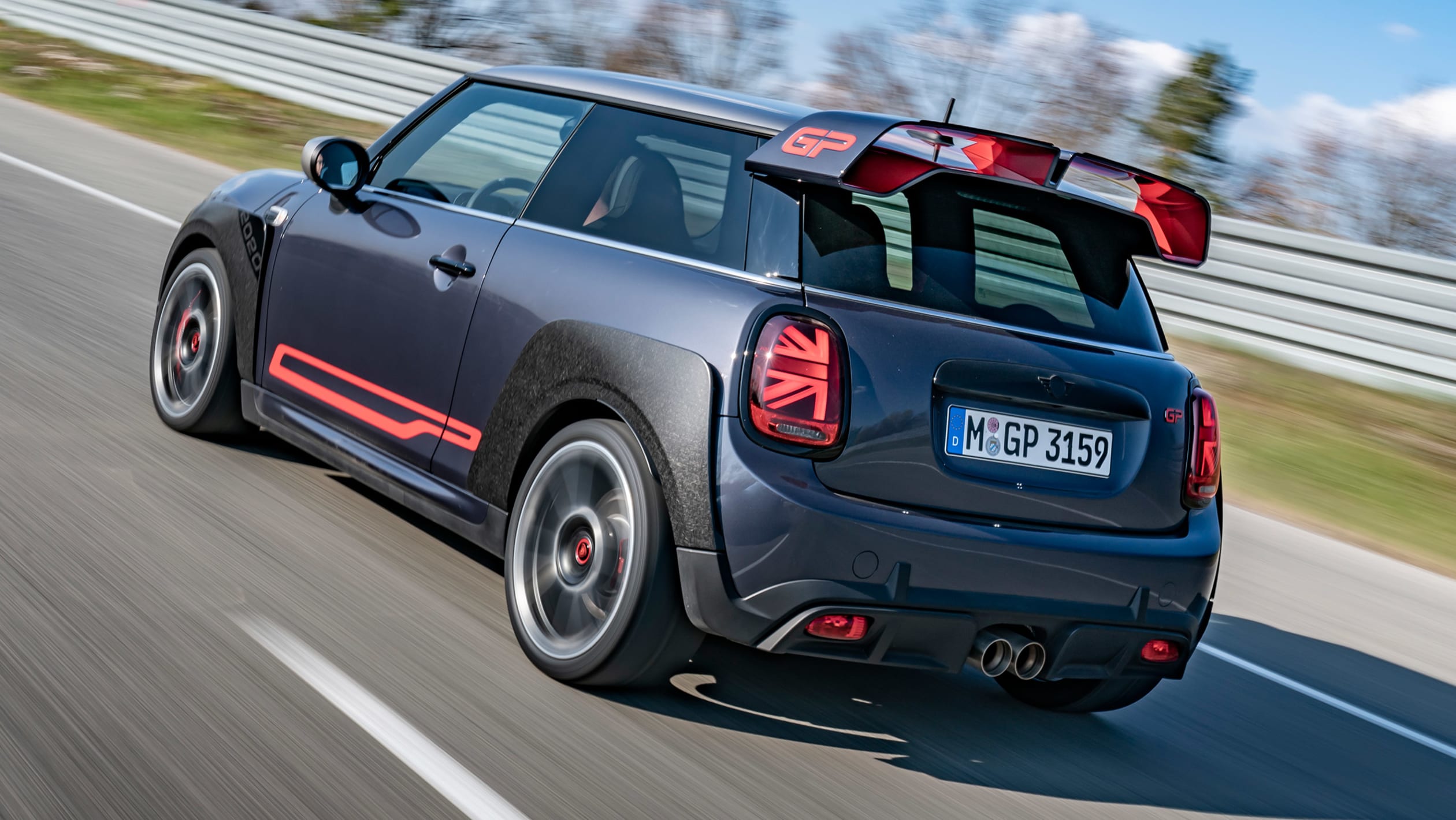 The British firm claims the latest John Cooper Works GP will hit 264km/h. Yes, 264km per hour. In a MINI. For the first time, the GP gets a larger, 2.0-litre turbo engine like its JCW stablemates, and this develops an impressive 225kW and maximum torque of 450Nm. Full power is constantly applied from 1750 to 4500rpm and lets the pocket rocket sprint from 0-100km/h in 5.2 seconds.

Other MINIs that pack this much power make use of four-wheel drive; however, the GP is front-wheel drive only. To try to smooth the GP’s power output, MINI has added a limited-slip differential on the front axle and recalibrated the stability control system. This worked impressively well on the winding roads around upper Bavaria; we didn’t have to fight with the steering wheel as the car tried to deploy that vast amount of power through its front wheels.

You only really notice any turbo lag below 1500rpm if you’re accelerating very hard, but beyond that point the engine delivers a strong punch of acceleration that will push you back into your seat.

The four-cylinder motor isn’t the most tuneful – as we already know from other JCW models – but since the GP has been completely stripped out in the back, it’s certainly louder, with bangs and rumbles from the exhaust reverberating around the cabin, and certainly adding a little more drama to proceedings. 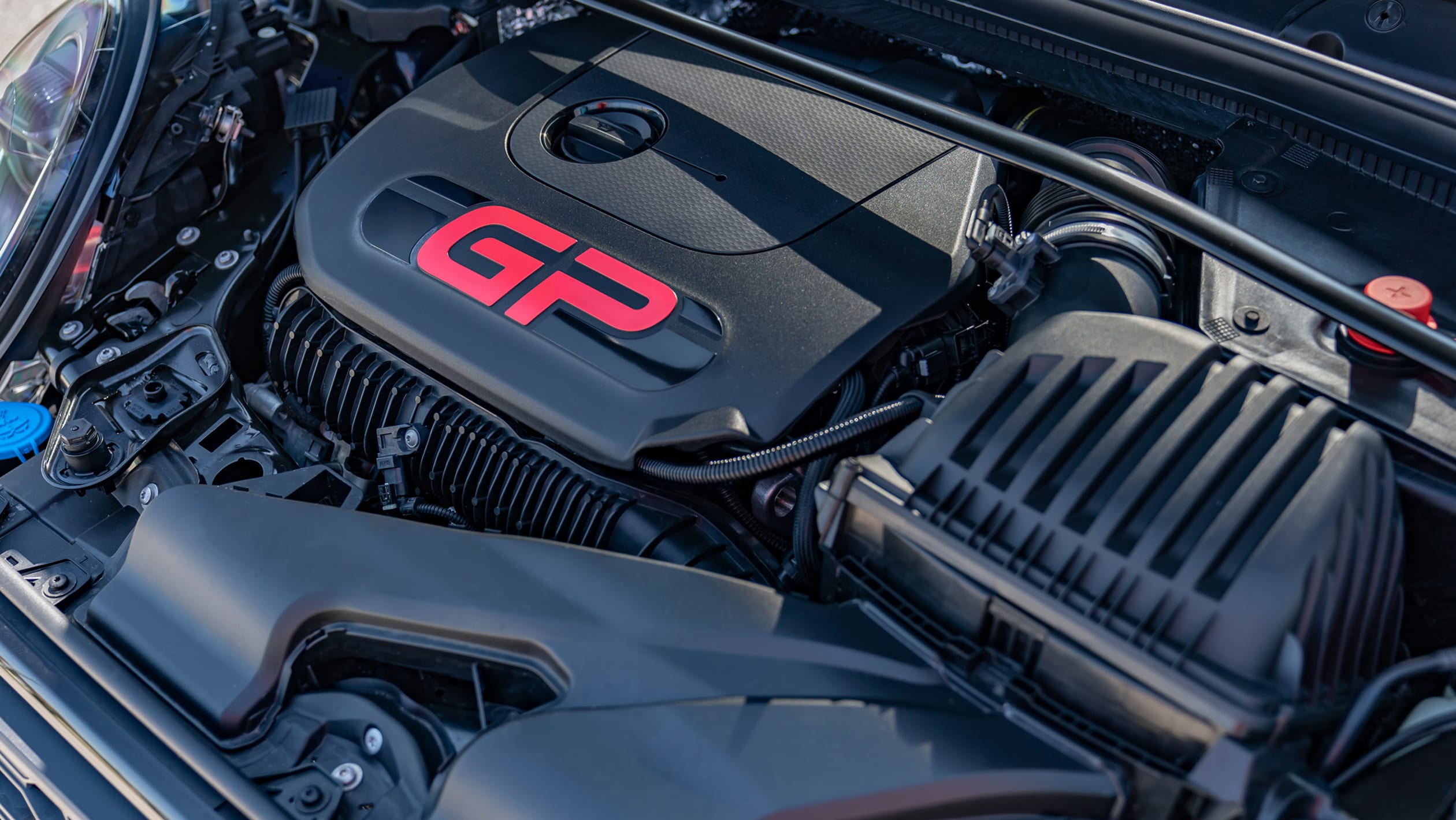 The bodykit isn’t just for show either; it gives the GP an aerodynamic advantage. The rear end always feels solid and planted during fast cornering, while the front end is quick and eager to change direction. The Alcantara-trimmed steering wheel is not only beautiful to hold, but the feedback received is also smooth, despite the power being delivered through the front wheels.

It would be a stretch to call the GP comfortable; stiffer suspension mounting bushes, additional chassis bracing, and uprated dampers and springs, which lower the car’s ride height by 10mm compared with the standard MINI John Cooper Works, make it quite a focused car for the road. But you could drive it every day, if you wanted to, thanks to it having an additional degree of comfort over those early GP models, whose ride quality was quite unforgiving. 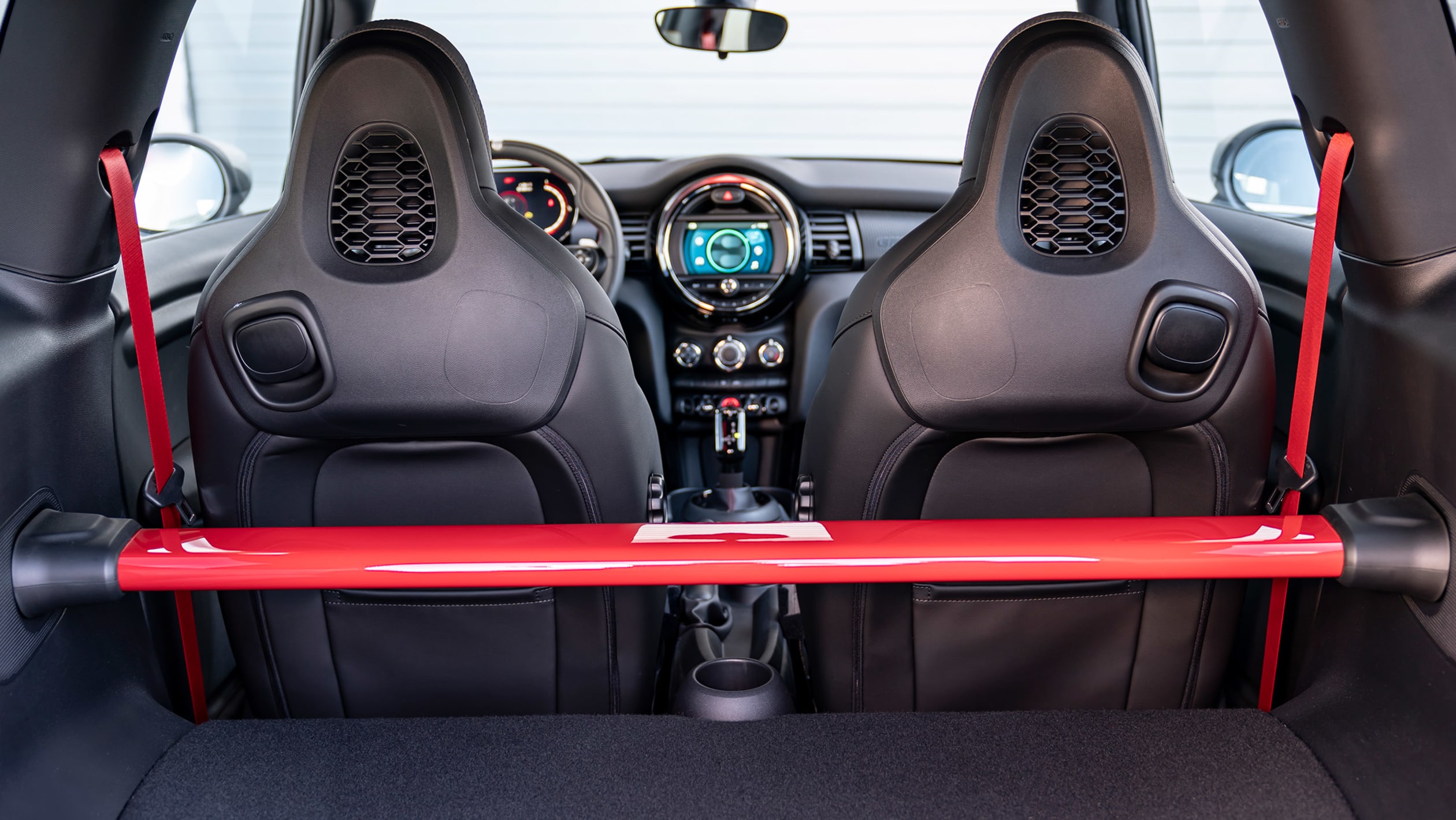 As we’ve come to expect with high-end performance cars, the MINI GP is only available with an automatic gearbox; the eight-speed unit in the GP is a sharp and intelligent transmission, delivering snappy changes at the correct times. But if the automatic mode doesn’t suit you, or you just want to be a little more involved, you can use the paddles on the steering wheel.

The rest of the interior is a match for the way it looks outside: bold. As with the previous two GP models, the rear seats have disappeared in a bid to save weight, and in their place a bright red strut brace across the width of the car provides greater torsional rigidity. Elsewhere, you’ll find the largely familiar MINI cabin architecture with the addition of magnificent sports seats, which provide excellent support. 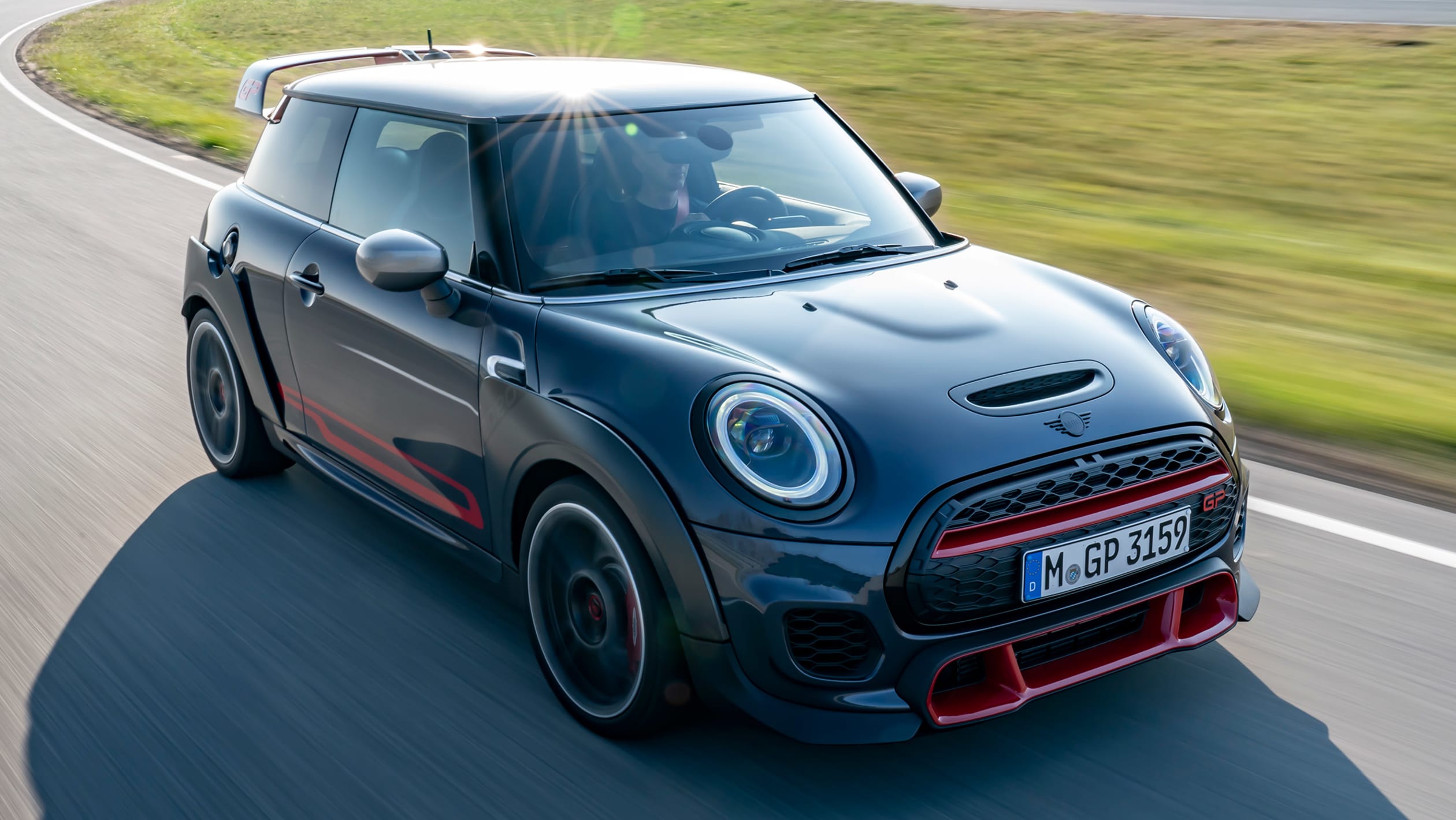 And not every GP will look the same inside; each buyer decides how sparse they want their MINI John Cooper Works GP to be. On request, navigation, automatic climate control or seat heating can be removed, all in the interest of saving weight and making the car even more focused.