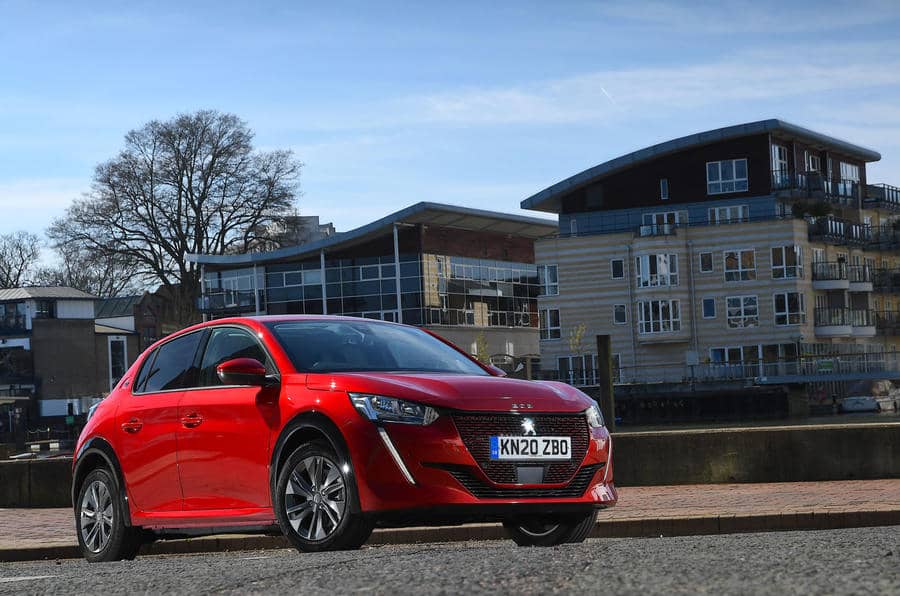 Peugeot has been quick to develop an electric supermini, but has it cut any corners? We take a first drive in the new electric 208.

The electric powertrain revolution is now beginning to transform the humble hatchback. For Australia, Peugeot says that it is ready to pounce on getting the e-208 here when it has enough traction, but is yet to provide a clear timeline.

Battery power has been gaining traction in other market niches over the past decade, but increasingly tough legislation and the rapid reduction in technology costs mean that electric power is no longer purely the preserve of bigger, faster and more expensive machines.

One of the latest electrified superminis to join the fold is the Peugeot e-208, which aims to deliver zero-tailpipe-emissions running without compromising the style, practicality and driving dynamics of its combustion-engined cousin.

The e-208 has been designed from the outset to be electrified and, as a result, packaging and space are unaffected. Factor in a powerful lithium ion battery and class-leading rapid-charge option and the e-208 promises the range and usability to convert those buyers who have thus far been EV sceptics.

The e-208’s CMP (Compact Modular Platform) underpinnings have been carefully conceived to accommodate an electric motor and substantial battery pack without significant re-engineering. 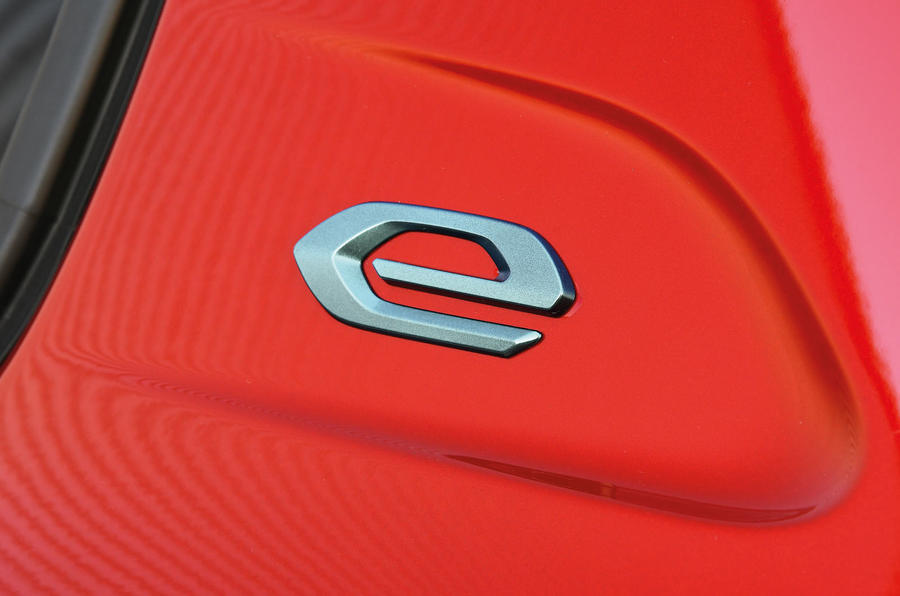 The car’s lithium ion battery pack is housed beneath the floor in what is effectively an ‘H’ pattern, the 18 cells located widthways under the front and rear seats and offering a total gross storage capacity of 50kWh. At 349km on the WLTP test cycle, the e-208’s range is at the upper end among cars of its type and should serve as a strong selling point.

Overall, the battery pack adds an extra 300kg to the 208 compared with a typical piston-engined model for an all-in weight of 1455kg, but efforts have been made to locate the extra mass as low as possible and to keep it within the wheelbase.

In line with the original design philosophy, mechanical modifications are limited, with the biggest change being the adoption of a 12mm-wider rear axle to accommodate the rear cells. As on the standard car, this is a fairly simple torsion beam and coil-sprung affair, while at the front, there are MacPherson struts.

Driving the Peugeot’s front wheels is a 100kW permanent-magnet synchronous electric motor, making this the most powerful of all 208s for now, with a very healthy 260Nm of torque available from zero revs. 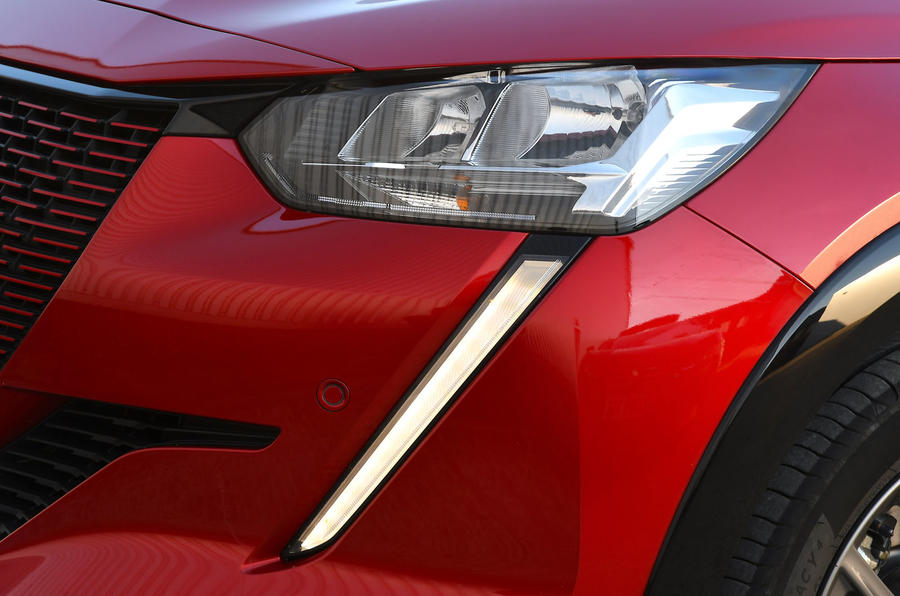 The car’s single-speed transmission features both standard Drive and Brake modes, the latter instantly reversing the polarity of the motor for a powerful regenerative braking effect when you lift off the accelerator. A further neat touch is the addition of a heat pump for the air conditioning and heating system, which helps reduce energy use by up to one-third over a traditional resistive set-up.

In a further effort to minimise potential buyers’ shock at making the jump from internal combustion, designers have made sure the e-208 looks almost identical to the standard car. The most obvious differences are the gloss black wheel-arch extensions that are required to cover the wider track; e-208 badges set into the C-pillars and on the front grille; and a dichromic lion logo that changes colour depending on the light falling on it. 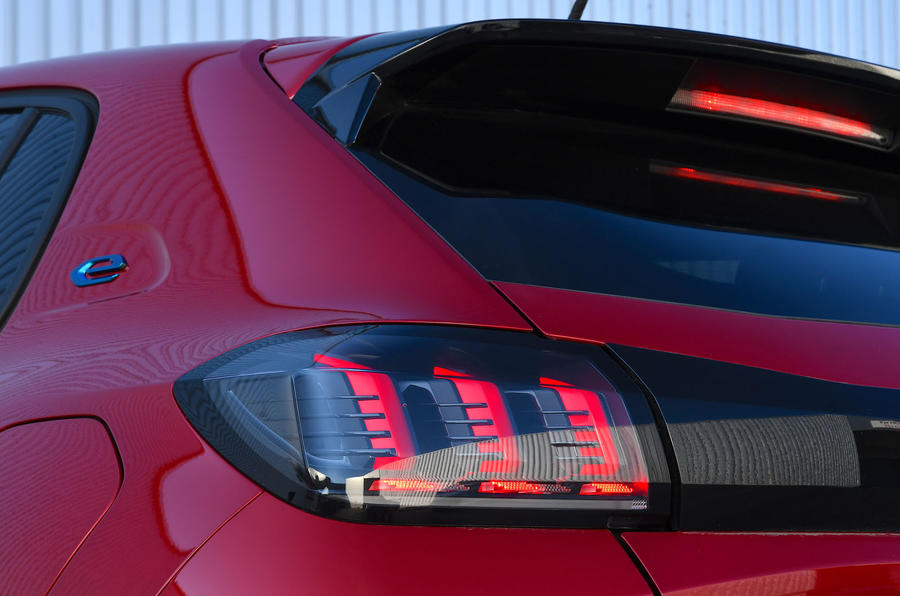 Peugeot has been on a premium push over the past few years, challenging established upmarket brands for both finish and eye-catching design, and with the 208 it has certainly succeeded in the latter, the slick dashboard design being a particular highlight.

Featuring the latest evolution of the now familiar i-Cockpit layout, the e-208 gets a high-set instrument cluster that sits above a small diameter steering wheel – although, as with other similarly equipped Peugeots, some drivers might find that the wheel rim still obscures some of the dials.

That’s a shame because the TFT display ahead of the driver is enhanced by 3D graphics, the main information such as the digital speed readout effectively ‘floating’ just above the screen. It’s another conspicuously novel touch, but some testers liked it.

A premium upgrade on our test car means the addition of a 10.0-inch infotainment screen that sits centrally and is angled towards the driver. Below this is a line of neatly arranged and easy-to-reach piano keys that provide shortcuts for the various audio, nav and climate controls. 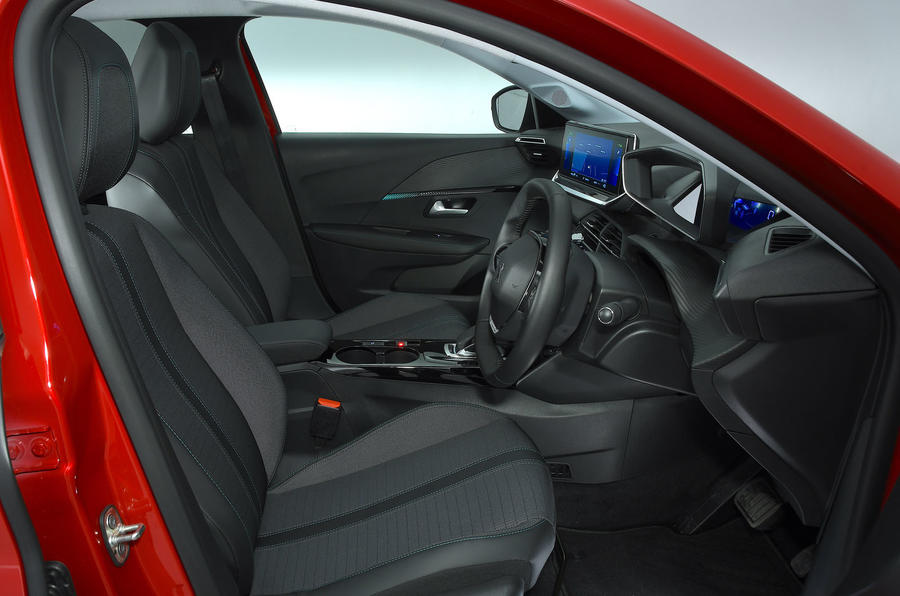 Yet while soft plastics are used for the major touchpoints and the switchgear features a pleasing mix of gloss black and brushed metal finishes, there are still too many low-rent materials in evidence around the cabin for the car to strike a consistently high impression of perceived quality.

Peugeot’s commitment to packaging the EV running gear as unobtrusively as possible has made the most of what’s available when it comes to space and practicality but, in some areas, that’s still not a great deal. Low-set front seating provides reasonable leg and head room, although passenger space in the rear isn’t as good as in other supermini hatchbacks.

There are plenty of handy stowage spaces around the car plus no fewer than four USB (including USB-C) ports. The boot is also unchanged over the standard car, which means the same highish load lip but also a useful 311-litre capacity, which stretches to 1106 litres with the rear bench folded. 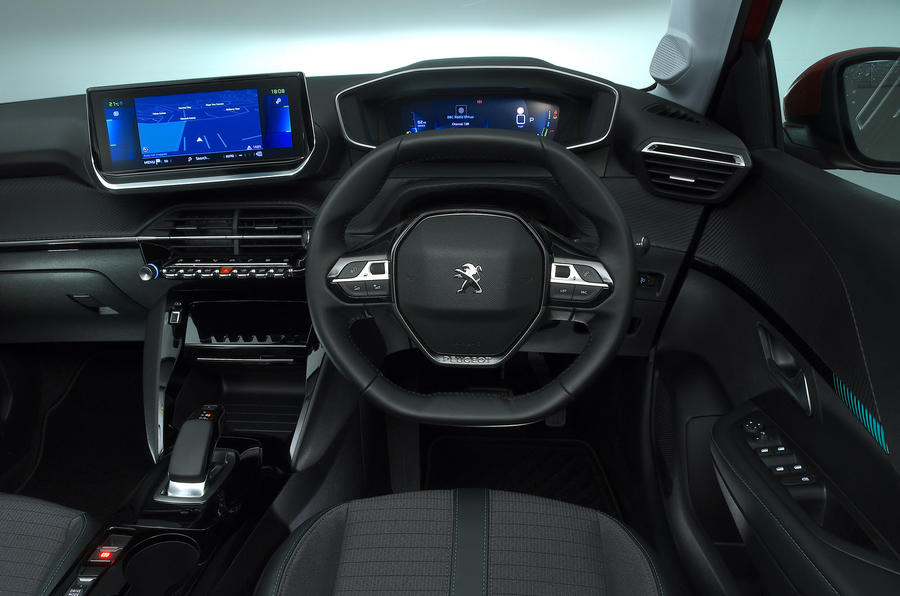 A 7.0-inch capacitive touchscreen infotainment system is standard on most 208 models, but the upgrade of our car swaps it for a 10.0-inch set-up that adds sat-nav (including a three-year subscription to TomTom Live) to the existing Apple CarPlay, Android Auto and DAB radio. It also links to your smartphone using Peugeot MyApp, which lets you remotely check on the car’s range, plus schedule charging and pre-programme the climate control.

The infotainment system’s graphics are crisp and the responsiveness is good, making it fairly easy to use on the move. Less impressive are the shortcut piano keys that are housed just below the centre air vents. The silver-lined rocker switches for functions such as the heated screen and hazard warning lights are easy enough to use, but the infotainment controls set behind them are hard to see and offer little haptic feedback. 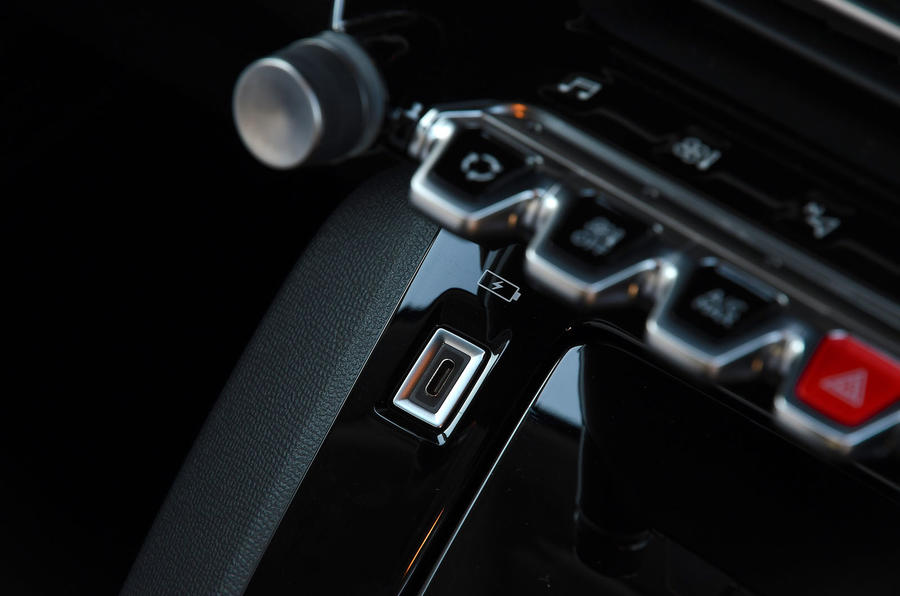 That familiar EV calling card of instant, torque-rich acceleration is present and correct in the e-208, its smart step-off making it a particularly effective performer in town driving. And with just a single-speed reduction gear transmission, acceleration is delivered in a seamless surge, with no pause for clutch take-up from standstill or for any gearchanges.

Like similarly powerful electrified rivals, the e-208 is at its best at low to medium speeds, where the car feels almost hot hatch quick. Above 80km/h or so, acceleration tails off fairly sharply, at which point it feels no more potent than a mid-range naturally aspirated petrol equivalent.

The Peugeot will cruise comfortably at the freeway speed limit, but it requires surprisingly large throttle openings to do so and that has the expected negative knock-on effect on the range. Engaging Sport mode (there’s also Normal and Eco) increases the sensitivity of the throttle pedal for greater responsiveness. 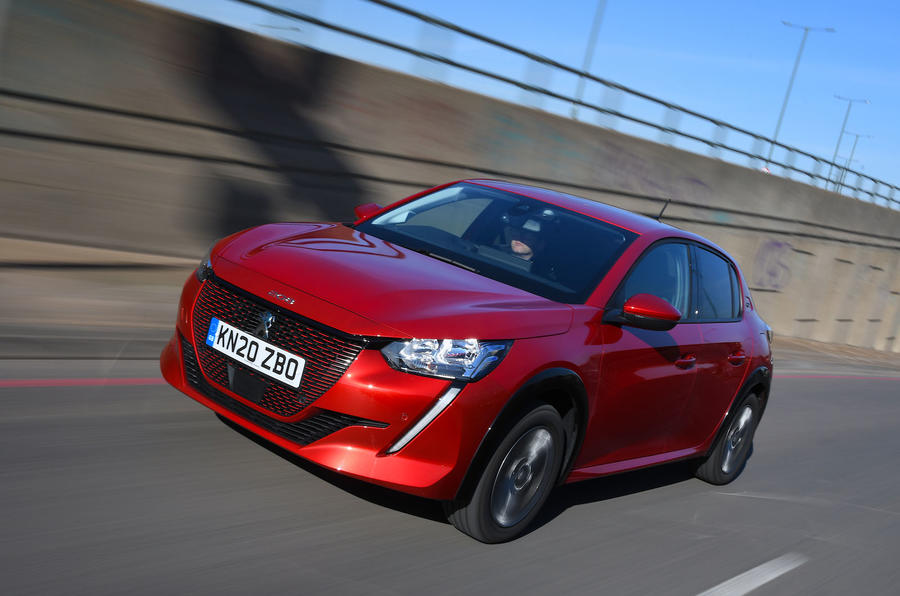 Pull the stubby gearlever back from the ‘D’ position into ‘B’ and you engage that more aggressive regenerative braking mode, with full off-throttle delivering enough retardation to trigger the brake lights and allow true ‘one-pedal’ driving. Get your anticipation right and you should only need to touch the brake pedal in the last few metres before slowing to a stop. This is doubly useful because there’s still some tuning of brake pedal progression and feel needed. Smooth stops in the e-208 require delicate footwork.

One area where the Peugeot scores against rivals is in its refined performance, helping it to take full advantage of the near-silent power delivery of electric motors.

Often these hushed mechanicals highlight other noises in the car, but not so with the e-208, which does a fine job of isolating occupants from wind and road noise. (There’s an acoustically tuned windscreen as standard.)

You sit pleasingly low in the e-208, which always helps when trying to foster a connection between car and driver. Like the standard version, there’s some springiness to the steering off the straight-ahead, but there’s decent weight and the combination of the small-diameter rim and relatively quick rack means the Peugeot responds promptly and accurately to your inputs. 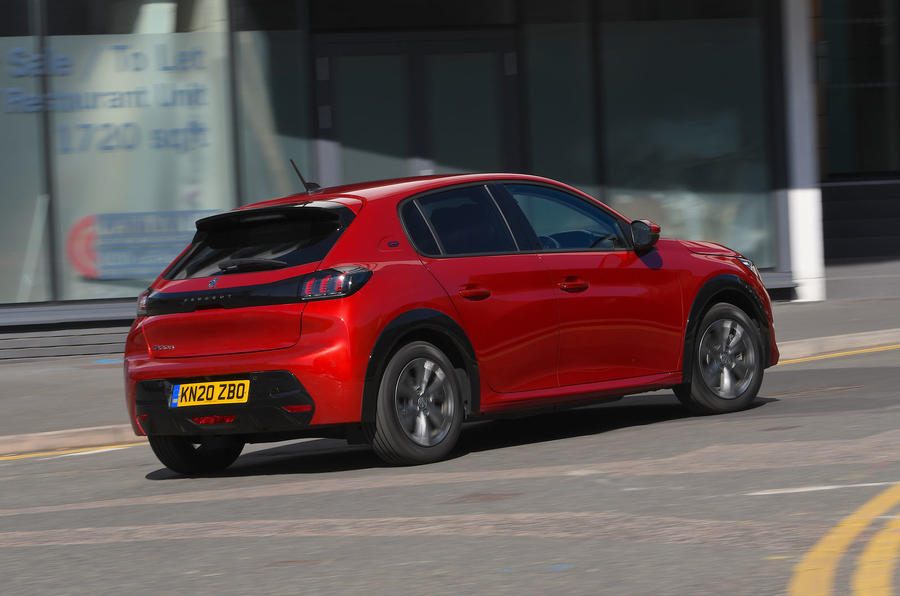 The softness of the suspension is what you’ll notice first, the car exhibiting a fair degree of roll on turn-in yet quickly controlling the movement and then taking a neutral, four-square stance through corners as that torsion beam rear axle takes its share of the lateral burden. Driven briskly, there’s a fluidity to the way the Peugeot goes down the road that’s reminiscent of French hatchbacks of a decade or so ago.

Drive a little harder and that extra mass starts to tell more punitively. The e-208 pushes wide in corners as the 195-section tyres lose out in the battle to stop nearly 1500kg travelling straight on. Lifting the throttle restores order, but it’s a fairly lazy response as the nose tucks back into line. There’s no real handling adjustability here, just safety and predictability.

Body control is compromised, too. The soft damping causes some float over undulating surfaces and, when really pressing on, mid-corner bumps set in motion a noticeable corkscrew effect. The e-208 is a capable steer, then, but not one that rewards like, say, the Mini Electric. 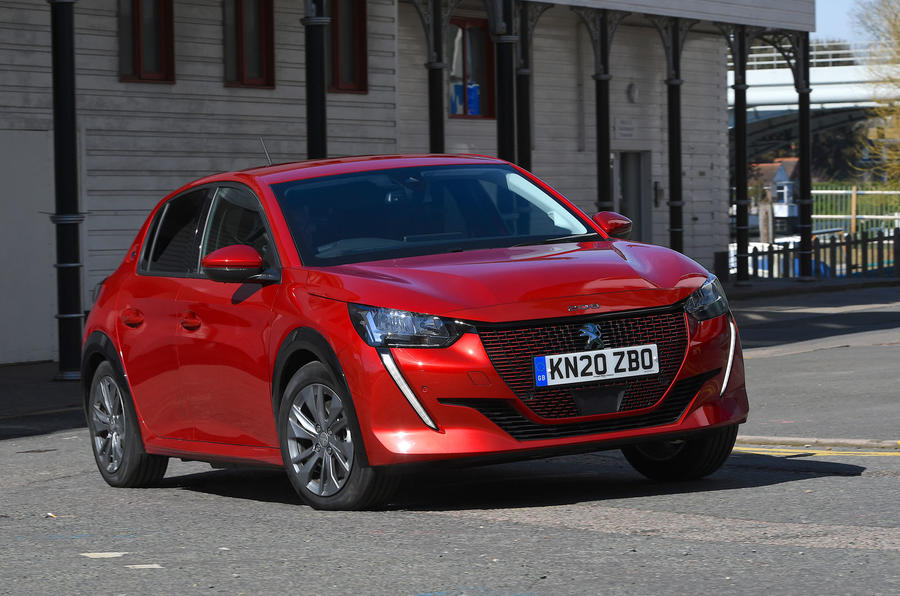 On the plus side, the combination of mass and suppleness gives the Peugeot a remarkably grown-up ride for this size of car, the e-208 smothering bumps with surprising plushness. It also does so quietly, with nothing more than a muffled thump reserved for the biggest potholes and interventions.

As with the handling, it lacks ultimate control, getting floaty over bigger crests, but somehow this sensation is in keeping with the car’s rather laid-back everyday character.

Peugeot’s greatest success here may well be in having made its new e-208 so normal. By seamlessly packaging EV running gear into the same space as the combustion-engine components, the French firm has saved itself a chunk of cash on the production line and created a car that is unlikely to alienate potential buyers in a class where conservatism tends to be king.

Judged purely as a supermini, the 208 on which this car is based isn’t in the top echelons of the class: it looks great but we’d like it to be more practical and its chassis to have a little more sparkle. As a small electric car, however, the e-208 is certainly good enough to lead its niche, thanks to its blend of style, performance, refinement, drivability and that all-important range.