Porsche has been testing the upcoming 992-generation 911 GT3 at the Nürburgring for some time now, and now a video of the track-focused model reveals its flat-six soundtrack.

The collection of clips (below) of a prototype undergoing track development at speed confirms what we new already: that the next GT3 will retain the naturally-aspirated ‘boxer’ engine loved by enthusiasts.

Although it’s hard to be sure, it sounds like the 992 GT3 hasn’t lost any of the outgoing model’s volume and tone, despite the addition of a petrol particulate filter and other emissions-reducing tech.

Telltale GT3 styling cues are plain to see, including the large fixed rear wing, splitter and diffuser, and the classic GT3 centre-locking wheels. This latest prototype has shed much of its pre-production camouflage, revealing a pair of sizeable air intakes in the bonnet, a bespoke front splitter with a wide lower grille and a prominent rear diffuser.

Also seen at the end of the video is a GT3 minus the trademark wing, suggesting the sought-after Touring model will make a return.

Further details have yet to be revealed, but we do know the 911 Speedster’s heavily revised 4.0-litre flat-six engine will be carried over to future GT models as Porsche’s GT division persists with naturally aspirated engines.

GT boss Andreas Preuninger said: “We’ve invested in the future with this engine. I can’t comment on future projects but we would be stupid not to re-use this engine somewhere.

“Our philosophy in GT cars is to stay naturally aspirated. We want to keep that engine for the future and that’s why we’ve made such a tremendous effort to get the engine right without taking emotion and performance away.” 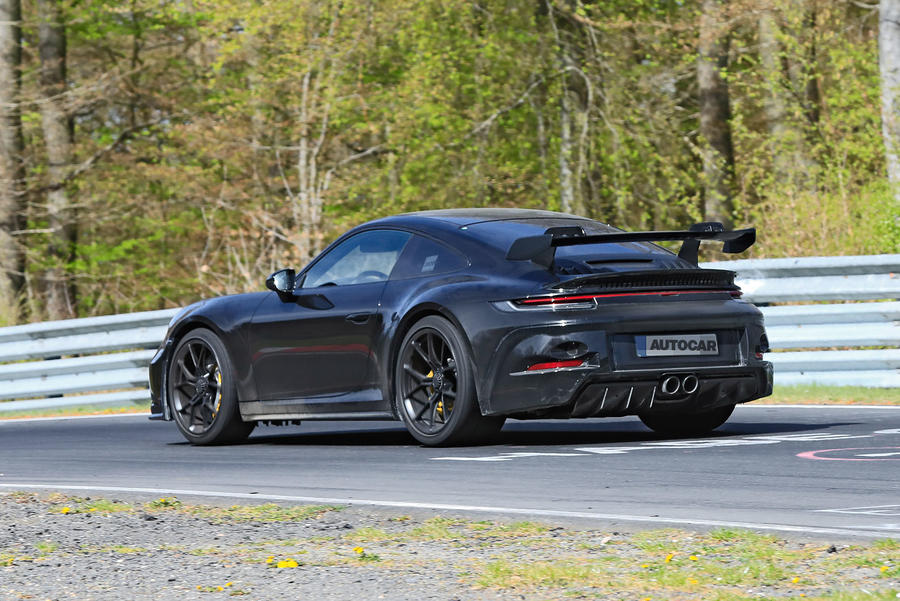 The Speedster, a swansong for the 991 generation of the 911 uses the same powertrain as the outgoing GT3 but receives a host of updates.

Chief among the updates, and in order to extend the regulatory life of this big-capacity direct-injection flat six, Porsche has fitted two sizeable petrol particulate filters – one integrated into the exhaust tract that exits each side of the block.

And yet owing to the use of thinner steel, nickel and soldering techniques rather than welding, the exhaust system now weighs 10kg less than before, despite the additional hardware. Power has also increased, from 368kW to 375kW, and continues to arrive at 8400rpm.

To achieve this with an engine that is not only cleaner but also suffers from an increase in exhaust back-pressure owing to the new filters is no mean feat.

The fuel-injection system now operates at 250 bar rather than 200 for improved propagation, and each of the engine’s six cylinders now gets a dedicated throttle body. The combined effect – but particularly due to the new throttle bodies – is even sharper throttle response, says Porsche.

The new Alpine A110 Legende GT adds a touch of luxury to this pint-sized sports car. The Alpine A110 is a great sports car that...
Read more
Facebook