First mid-engined Corvette feels like a huge step forward from its predecessors and enters the Australian market at a tantalising price for supercar buyers.

The new, eighth-generation Chevrolet Corvette delivers many impressive statistics. But none is more remarkable than the one with the dollar sign in front of it.

Chevrolet’s mid-engine supercar is available in Australia now and in three specification grades and both coupe and convertible body styles. Pricing starts at $144,900 plus on-road costs for the entry-level 2LT coupe while the convertible option adds $15,000. 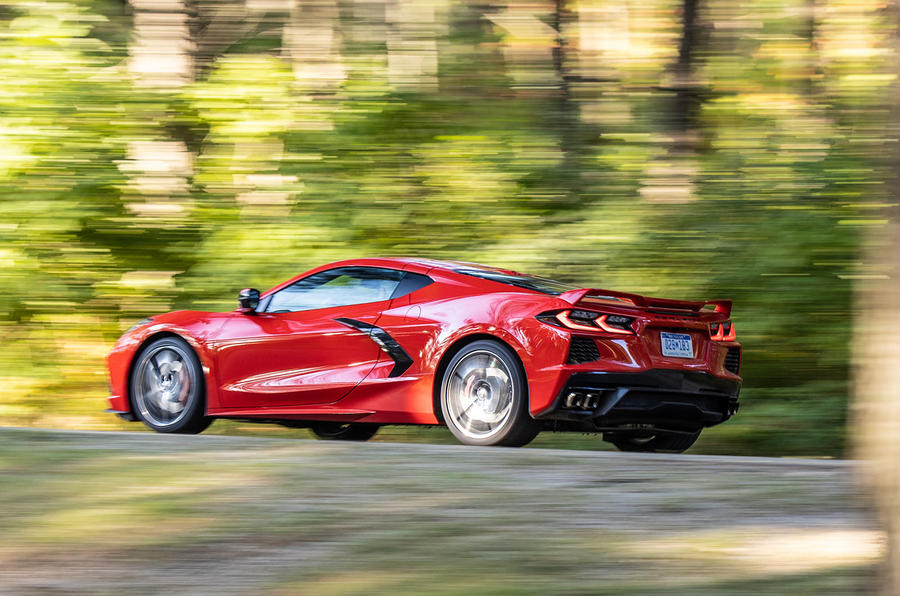 The mid and flagship grades are the 3LT and Carbon Edition Coupe respectively, with 3LT coupe pricing confirmed at $160,500 and $175,500 for the convertible.

The Carbon Edition is exclusive to Australia and New Zealand and produced in a limited production run to celebrate the local launch of Corvette. Pricing starts at $189,990.

But back to our American partiots for a minute; persuade an American dealer to sell the base car at its official MSRP list price – unlikely for several months at least – and it will cost just $59,995 (AUD$110,000). This for a mid-engined 360kW sports car with performance that gets it close to supercar territory. Bargain is an overused term, but it’s hard to think of any better way to describe the C8.

The Australia retail is thankfully not far north due to this C8 Corvette being the first Corvette produced natively in right-hand drive from the factory. Even selecting the plushest-available 3LT trim package and adding both the Z51 performance pack (including a sports exhaust, a limited-slip differential, bigger brakes, upgraded aero and Michelin Pilot Sport 4 tyres in place of standard all-seasons) and adaptive dampers for still brings in a fully laden Vette for less than Porsche charges for an unoptioned Cayman GTS.

While supercar makers can afford to throw exotic materials at structures, the C8 has been built around a far lower-cost aluminium structure. There are two carbonfibre parts to add strength in critical areas, one being a panel underneath the central “backbone”, the other the rear bumper beam. Chevrolet claims the C8’s structure is 19 per cent stiffer than that of the C7.

It is bigger, too. Indeed big, full stop: the 2723mm wheelbase in 248mm longer than that of the Cayman and the overall length of 4630mm makes it longer than almost any other mid-engined two-seater and 134mm longer than the front-engined C7. The advantage of that is the relatively spacious cabin and the added practicality of the rear luggage compartment. The C8 has also lost the transverse rear leaf spring of other recent Vettes, now having coil springs at each corner. Chevrolet has been talking about a mid-engined Corvette for several decades; the original plan was for the previous-generation C7 to make the switch until GM’s bankruptcy in 2009 saw the project cancelled. While much about the C8 is new beyond the novelty of reversing the order of passengers and powerplant, much is familiar as well. Design riffs hard on the same themes, with a very similar sharky front end to that of the outgoing car and familiar rear lights. Exterior bodywork is still made from glassfibre, and the core of the mechanical package is the time-honoured ‘small block’ pushrod V8, this driving the rear wheels through an eight-speed dual-clutch gearbox.

First impressions are overwhelmingly positive, the new Corvette looking smart and well-finished, its cabin lacking the powerful aroma of resin and cheap plastic that characterised its predecessors. The car I drove in Michigan was a top-spec 3LT, with pretty much every easily touched non-glass surface in the cabin being made from Alcantara, leather or carbonfibre.

Ergonomics aren’t entirely successful, the long row of switches for heating and ventilation between the front seats are hard to see and the driver’s seat is mounted higher than the passenger’s; even its lowest position feels too high. Head room is also limited for taller drivers, although – another Corvette trademark – the C8 remains a targa, with a lift-out roof panel. (A full convertible will be offered later.) The steering wheel is probably the squarest fitted to any car since the Austin Allegro and – to get the niggles out of the way – the long dashboard and shallow windscreen angle throw up lots of distracting reflections.

Such grievances make a very modest heap next to the Corvette’s considerable virtues; it is a hugely likeable car. GM’s decision to stick with the pushrod V8 for the entry-level car is vindicated within a couple of minutes; while short on technical sophistication, it is effective, willing and hugely charismatic. Despite the relocation, noise levels have actually fallen slightly, the C8 having much less of the low-frequency hum of previous Vettes. Throttle response is instant, mid-range is keen and although the engine only revs to 6600rpm, it sounds better in proximity to its limiter than some posher alternatives do hundreds or even thousands of revs higher. In terms or raw performance, the new Corvette doesn’t feel dramatically quicker than the old one, although the mid-engined layout has improved acceleration numbers. Chevrolet claims it will be able to deliver a sub-3.0sec 0-100kph time using its launch control; there is also the option to warm rear tyres through a strategic burn-out using the ability to clutch-dump by pulling and then releasing both gearchange paddles at once. On rural backroads, I didn’t do any of that; but a stamped-throttle start resulted in a 3.5sec 0-100kph time on the car’s in-built performance timer.

The big difference is a dramatic increase in both stability and driver confidence. Even the entry-level C7 felt edgy when asked to carry big speed on twisty roads. The new car has huge grip everywhere, and none of the sensation that it is trying to work out where to spit you off. Only big throttle openings in tighter corners get the rear running short on adhesion; on faster stuff, it feels absolutely planted. Impressively pliant ride quality helps here too, the Corvette handling crests and compressions especially well with the optional adaptive dampers in both soft Tour and firmer Sport modes. There is a downside to so much grip: very limited sensation through the steering wheel at road speeds. The rack is fast-geared, front-end responses are keen and you quickly build faith in the car’s ability to generate G-forces, but steering feedback is never better than muted. I suspect it would improve with the larger, sustained loadings of track use, but I only drove it on road.

The dual-clutch gearbox is another serious accomplishment in a car wearing this price tag. The eight-speeder doesn’t have the pronounced torque bump on upshifts that junior supercars tend to do, but although it lacks drama, changes are lightning-fast in all modes and the transmission is refined when treated like a pure auto. Gearing remains tall – another Corvette hallmark – with just 1500rpm on the tacho at an indicated 70mph in top. That will help with economy, but it does mean several downshifts for short-notice acceleration from cruising speeds.

Beyond price, the biggest difference between the C8 and putatively similar supercars is practicality; a large part of the Corvette’s appeal has always been as an everyday sports car. Luggage space is split between a “frunk” under the front bonnet and a larger compartment positioned behind the engine under the high-opening flap at the rear of the car and large enough to hold a set of golf clubs. Total luggage space is 356 litres, less than a Cayman but still entirely respectable for a car in this segment. The rear space is also sized to carry the targa roof when this is removed, although at cost of not being able to carry much else.

While the engine position has switched, the C8’s primary mission is the same as that of its forebears: a powerful sports car that combines unbeatable bang per buck with respectable practicality. It doesn’t have the dynamic focus or technical sophistication of a true supercar, but nor does it really want to be one.

It is also the slowest version of the C8, with faster versions set to include a new turbocharged overhead camshaft engine and a hybrid that will make something close to 750kW. Those will be better able to slay really big giants.