We get behind the wheel of the bombastic new V12 Ferrari 812 GTS drop-top.

We know the combustion engine’s days are numbered – especially larger capacity motors. Their lifespan will be prolonged slightly with electrification, but it means that – potentially – the purity of configurations such as Ferrari’s naturally aspirated V12 could be lost well before the end of the decade.

So, if the 812 GTS represents the series production swansong for Ferrari’s iconic combustion V12, then all $675k of it should be savoured, because it’s a fantastic sports car dominated by that engine. Without the shackles of forced induction, the motor spins to 8900rpm, and for the premium the GTS costs over the 812 Superfast coupe, the ability to open the retractable hard top gives you even greater access to that glorious engine and its superb soundtrack.

It sounds great with the roof and windows closed, but initiate the mechanical ballet and open the hard top, and it’s like your ears have popped as the V12’s cultured scream fills the cabin. The exhaust has been specifically tweaked for the GTS for this very purpose.

The roof is more of a targa-style panel; it’s operated electrically, takes 14 seconds to fold, and can be initiated at up to 50km/h.

However, these are not the most impressive stats about the GTS. Due to the weight of the roof’s motors, the mechanism and the additional body strengthening, the GTS weighs around 120kg more than the Superfast, but with a dry weight of 1625kg it hardly dents the 812’s performance.

The GTS will sprint from 0-100km/h in “less than 3.0 seconds”, says Ferrari, launching from 0-200km/h in just 8.3 seconds. That is astonishing pace for an open-top car with no turbos – and you really feel it on the move.

With Race mode selected on the steering wheel-mounted Manettino dial, the throttle response is – ironically – almost like an electric car’s. Millimetres of movement in the throttle pedal’s travel are reflected by the engine’s instant hunger to gain revs. You feel that fat torque curve, with the engine’s displacement carrying you along effortlessly. It never feels sluggish, and as the revs rise the GTS takes on a hard-edged character as the V12 reaches its crescendo.

At which point you pull the right-hand paddle, the dual-clutch gearbox snicks another gear, and the onslaught resumes. It’s addictive. We are exponents of EVs at Auto Express, and while their acceleration might thump as hard as the Ferrari’s in some cases, none can match the aural and mechanical theatre of the GTS.

In open-top form the 812 is not just about the powertrain though. The chassis is an equal to that engine. The steering is as fast as we’ve come to expect from Ferrari, but the work to the GTS’s platform means that, despite the cutting away of the roof, the car’s torsional rigidity feels excellent, which means the front end has no problem keeping up with the speed of the steering.

The level of grip on offer at the front axle is of the order that you’ll need a race track to fully exploit. There’s not much feel through the lightly weighted, electrically assisted steering, but the way the long nose darts towards an apex fills you with confidence, even in a car this big, with this much power and costing this much.

The GTS’s sheer agility is helped by the brand’s second generation of what it calls virtual short wheelbase rear-axle steering. Basically the rear wheels work to help the fronts, while the usual magic served up by Ferrari’s E-diff is present.

At the rear, grip and traction are surprisingly good given the performance level too, the relatively conservative Pirelli P Zero rubber working well on our warm March test day. However, the GTS actually flows better in the “CT Off” driving mode, which employs Ferrari’s superb Side Slip Control 5.0 chassis system to let you play with the car’s balance. 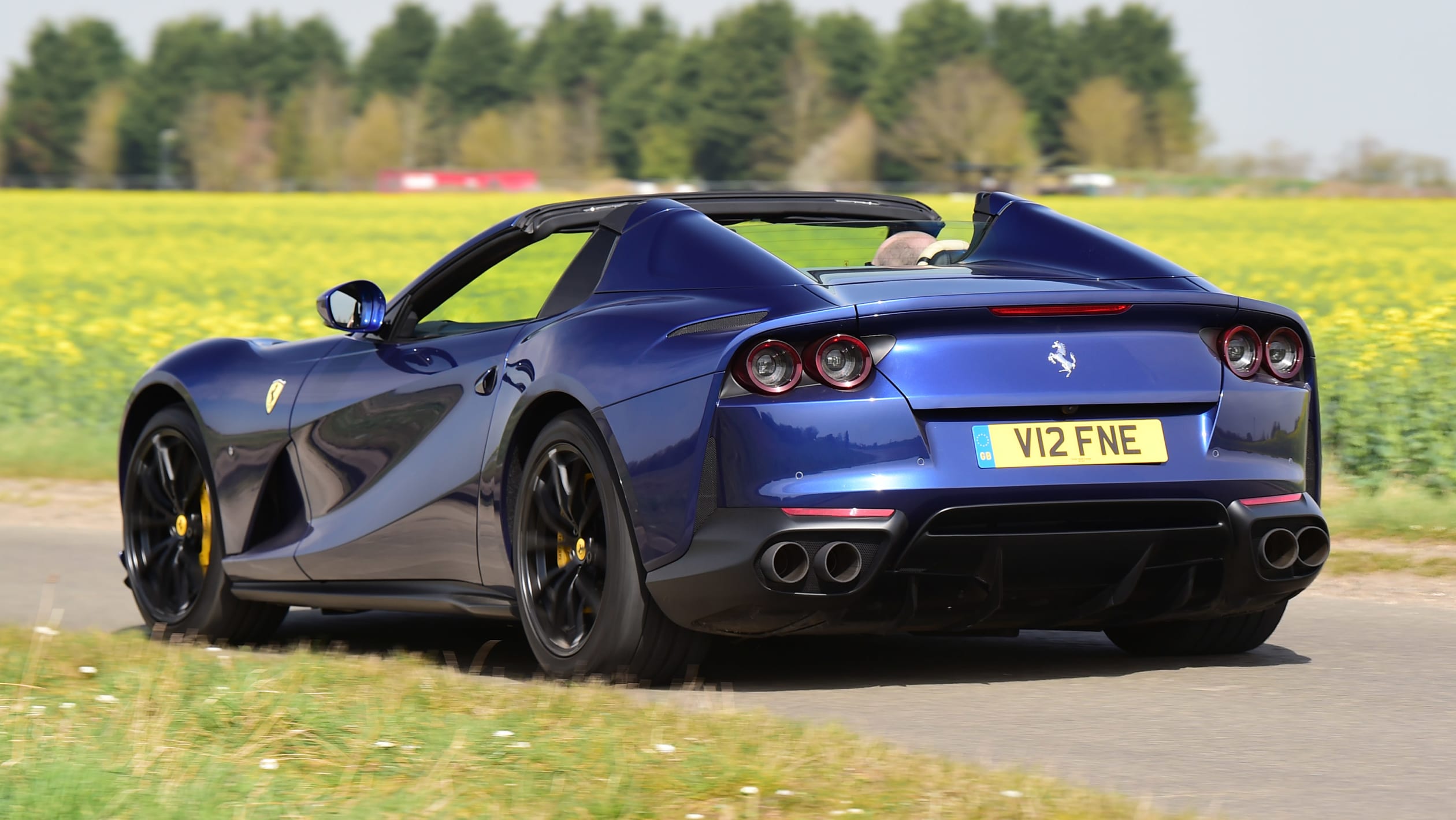 After a series of bends and just one short straight – all straights feel short in the GTS – it’s obvious that the car offers super-sports car performance, then. And when you just want to take it easy, Ferrari’s open-top flagship is a great car to cruise along in, proving its GT credentials; it’s the perfect mix of aggression and serenity.

With the roof down there’s not much turbulence in the cabin, helped by two little flicks on the windscreen rail that help to deflect air over the void left by the roof.

It doesn’t feel flimsy or wobbly either, despite its conventional chassis construction compared with some rivals that use a carbon fibre monocoque. Indeed, on the road it’s almost impossible to sense the extra weight the body reinforcement adds, and in Ferrari’s now familiar Bumpy Road mode for the suspension, even on gorgeous lightweight 20-inch alloy wheels the ride is more flowing and forgiving than you might expect.

As for practicality and general usability, the 210-litre boot offers enough room for a pair of weekend bags, while forward visibility is pretty good, thanks to the low nose. However, this is a very long, very wide car, and while the buttresses that flow back from the cabin look great, they do hurt rear visibility just a touch.

There are also elements of the package that aren’t quite as good as Ferrari’s latest models, highlighting the 812’s roots in a previous era for the Italian brand.

The infotainment screens that flank the central analogue rev-counter now look a bit old-school and grainy in their resolution, while the menu system isn’t the most intuitive to navigate around, either.

In fact, the whole cabin could do with a refresh. While material quality is good, the layout is a little dated when compared with that in Ferrari’s latest GT car, the Roma. Nevertheless, this is a pretty small issue with what is an otherwise fantastic piece of engineering, design and execution that, seemingly, Ferrari knows how to do best at this level of the market.

As a potential farewell to Ferrari’s series production V12 engine in pure petrol form, the 812 GTS is a fitting sign off that stays true to the brand’s values. The performance is truly astonishing, but it’s how it delivers it and the sensations it conjures as part of the experience that makes this an impossible car not to fall for. Yes, there is some tech and areas of the interior that now look and feel a little dated, but in virtually every other respect the 812 GTS is the best front-engined super-sports car, yet one of the best grand tourers at the same time. Bravo Ferrari.