The distinctive Ioniq 5 electric family car is a declaration of Hyundai’s intent, and it has the Tesla Model Y firmly in its sights.

On paper, it’s hard to not get a little excited by the new Ioniq 5. Hyundai’s electric spin-off sub-brand comes from good stock; ever since its parent group first aimed for the electric car market with the Kona Electric and the mechanically similar Kia e-Niro, it’s long been topping the class when it comes to zero-emission range and efficiency. Now the Korean brand has set its sights on the Tesla Model Y.

Hyundai is approaching the market with a ground-up design, because the Ioniq 5 rides on the group’s E-GMP platform. It’s a fully bespoke EV architecture, and one that’ll eventually be used by a wide range of models – the next to hit the market will be the EV6 from sister brand Kia. It’s easy for that excitement to build further when you see the 5 in the metal. Hyundai has turned to the past for the design inspiration of the first standalone Ioniq model, with features taken from the striking Pony Coupé concept from 1974. There are definitely elements of the wedge-shaped Italdesign creation in the new car’s styling.

However, this time around these elements are applied to a chunkier – and larger – hatchback shape. To give some sense of perspective, those alloy wheels, which look neatly in proportion with the body, measure a whopping 20 inches in diameter. The 5 is 4.6 metres long – about the same as a Volkswagen Tiguan SUV – and its wheelbase outstretches an Audi A6’s, which shows what a neat trick the designers have pulled off in getting the proportions to work so well. But it’s the detailing that really adds to the drama. The front and rear lights are made from dozens of pixel-like LED units, the sharp bodywork along the car’s flanks and the fan blade slashes cut into the wheelarch cladding all contribute to true concept car styling for the road.

It’s just as smart inside, too, although vast is the first word that springs to mind. With much of that sizeable external footprint dedicated to cabin space, combined with the flat floor made possible by a battery pack slotted beneath the passenger compartment, the Ioniq 5 delivers true luxury limo levels of legroom. 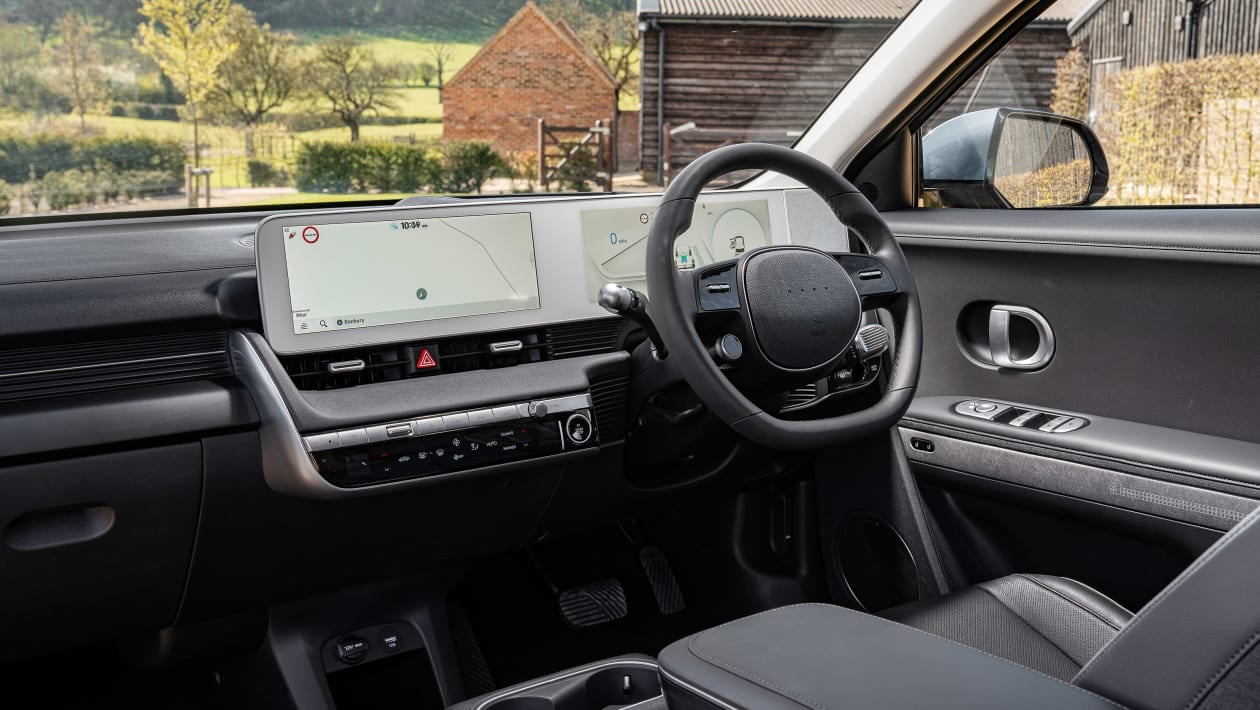 It’s this space that allows the 5 to perform its party trick: the electrically folding front seats can go almost completely flat, giving passengers somewhere to relax while waiting for the car to recharge. A 531-litre boot means there’s excellent storage space, too.

The dashboard design is dominated by a pair of digital displays, and while the resolution isn’t Tesla-sharp, it still looks smart and works well. The design is almost excessively minimalist. There’s little, if any, branding; the steering wheel gets four little squares embossed into its centre rather than any Ioniq lettering or badging.

The car we drove was a pre-production model, and Hyundai was keen to stress that the suspension tuning, systems calibration and particularly noise, vibration and harshness standards are not at the level we can expect from the final product. However, even in its current state, there’s a lot to commend. During our short drive, the stand-out quality was the 5’s ride comfort. Since the car sits on a bespoke EV platform, the 5 is noticeably more relaxed than a Kona Electric. The ride irons out bumps sweetly, thanks to the car’s long wheelbase and sophisticated multi-link rear suspension layout. Yet the 5’s square stance and low centre of gravity mean that it doesn’t feel at sea through corners. Although we didn’t have the chance to push the car to any extremes, body roll was less pronounced than we’d have expected, given the car’s forgiving chassis set-up.

We sampled the most potent two-motor model with 225kW, and performance was every bit as strong as the claimed 0-100kmh time of 5.2 seconds suggests.

In most situations, the 5 defaults to rear-wheel drive in order to maximise range, which in this case is predicted to be roughly 480km from its 72.6kWh battery.

The line-up will kick off with a more modest single-motor variant with 125kW and a 58kWh battery, while an 800 Volt electrical system across the board allows for 220kW charging. Find an outlet that can keep up, and that means 100km of range can be added in as little as five minutes. Our first impressions of the new Ioniq 5 are hugely promising. Impressive range and performance stats look set to be a given, while the cabin is wonderfully spacious and the ride is comfortable and composed. It looks set to be more expensive than Volkswagen’s ID.4, but the quality backs up the potential price. We’ll hold back on a rating until we try a finished car, but Hyundai’s new EV sub-brand looks to be onto a winner.