The Land Rover Defender has certainly been one of the biggest car launches of the past 12 months. But up to now it has been available only as the 110 model – a big, practical workhorse with stellar off-road ability, but not the three-door 90 that will account for many ‘urban’ sales.

So here, then, is the new Defender 90 – and in a spec and trim level that are bound to appeal to lifestyle customers more than farmers. This is the P400, which has a new straight-six, mild-hybrid petrol engine producing 296kW and 550Nm of torque – enough to take this 2.2-tonne SUV from 0-100km/h in a mere 5.7 seconds.

If you do prefer something simpler, check out our Defender 90 P300 off-road review. What’s more, our car is in top X trim – as it currently has to be, if you want the P400’s grunt. X sits above HSE in the line-up and includes everything from 20-inch dark-alloy wheels, premium cabin lighting and walnut veneer to a head-up display, darkened tail-lights and a Meridian sound system with 14 speakers and a subwoofer. Think of it as the Defender Bling Edition.

More constructively, it also gets air suspension, making it the only three-door Defender to offer this feature as standard. 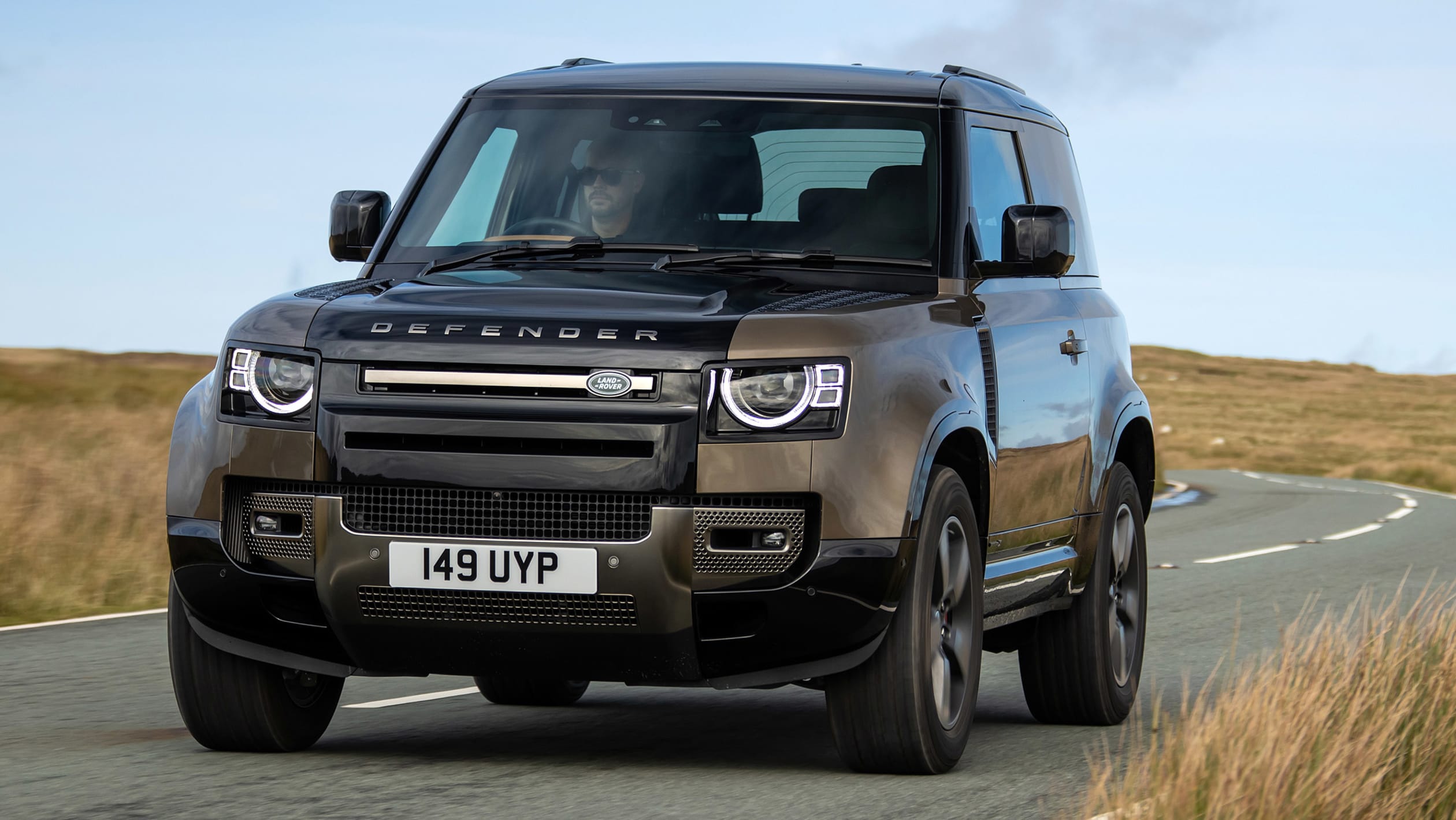 Stamp on the throttle and the P400 feels every bit as fast as its figures suggest. The eight-speed automatic gearbox shuffles ratios about quickly to cope with demands for acceleration and, once that process is compete, the 90 leaps forwards.

Indeed, there’s a noticeable amount of pitch to accompany this, as the nose jolts upwards. In many other cars it would seem unnerving but in a weird way, there’s something reassuring about it in the 90 – a reminder, perhaps, that for all the on-paper pace, you’re still in a three-door Defender. This trait extends to cornering, when you’ll feel the tall body rolling, even on air suspension. Still, while the steering is relatively heavy and typically inert for an electrically assisted system, it’s accurate enough, allowing you to place the Defender with ease, then be patient as the body settles before using the plentiful torque to accelerate out of corners.

A rather more surprising characteristic is the rolling refinement. The engine has a surprisingly gruff note as you accelerate, but once you’re holding a steady pace, it settles down. And this allows you to appreciate the isolation of road noise, which is particularly impressive for a car sitting on chunky 20-inch alloys and 255/60R all-terrain rubber. Overall, then, the P400’s dynamic make-up means that it is happier as a sophisticated fast cruiser than it is being hustled or rushed. Which is probably a sensible thing, when you think about it.

Inside, the 90 still has the commanding feel of the 110, so it has excellent forward visibility. You’ll be aware of the car’s size on all but A-roads, perhaps – but the clear view and relatively precise steering mean that it never feels as unwieldy as an old Defender. In X trim, the cabin takes industrial ruggedness to an art form, mixing bare-metal items with high-grade leathers. The Pivi Pro infotainment system is a useful asset at the heart of the dash, with quick responses. This spec includes a front-row jump seat, too. It’s big enough for a child, and reverses into a thick centre armrest when not in use. Access to the back seats is a little clunky, thanks mainly to how high you have to climb to get past the front seats. But on the whole there’s enough practicality here, with a 397-litre boot capacity to match most mainstream five-door family hatchbacks – albeit with a side-opening tailgate that won’t do you any favours in small parking spaces. Mild-hybrid power comes with a hefty price premium in the Defender 90 – although any tick-every-box customers will love the X edition, its extensive equipment list and its scope for further personalisation (and expenditure). Cheaper versions should be easier to recommend, nevertheless. The shorter Defender feels every bit as special as its 110 stablemate – and that middle front-row seat should help to make it practical enough for many buyers.

The new Land Rover Defender 90 P300 shows us its strengths in our off road review. We know what the top-spec Defender 90 is like...
Read more