Mercedes-Benz has released the first images and details of the upcoming SL roadster ahead of its official reveal next year.

Both cars show a clear family resemblance to the AMG GT, while the different exhaust tip designs suggest multiple engine derivatives are being put through their paces. The camouflage used seemingly confirms Automotive Daily’s exclusive partner Autocar’s previous reporting that the SL will arrive with a traditional fabric hood in place of the folding hard-top arrangement that has been used for the past two incarnations. 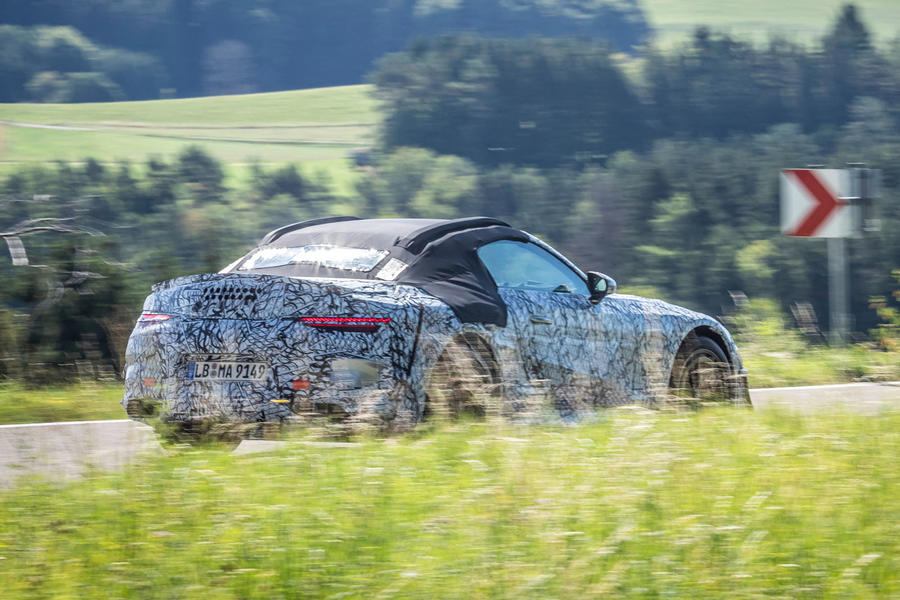 Test mules had previously been spotted at a top-secret development facility, which despite being largely under wraps showed off a long, sloping bonnet, prominent rear haunches and an angular front grille design. The rounded rear end is similar to that of the Mercedes-AMG GT sports car, which will share a platform with the SL in its next iteration.

Last year, novel-looking Mercedes prototypes, believed to be chassis mules for the new SL, were spotted after then-AMG boss Tobias Moers said that SL prototypes were entering their testing phase. Moers also confirmed that the SL, which will go on sale by 2021, will be “aligned” with the next AMG GT. The duo’s shared aluminium-intensive platform, known as the Modular Sports Architecture (MSA), will increase the economies of scale and overall profitability of two of Mercedes’ most exclusive model lines.

He also confirmed that the eighth-generation SL would be offered only as a roadster, like its predecessor. It is expected to go on sale in the Australia towards the end of 2021. 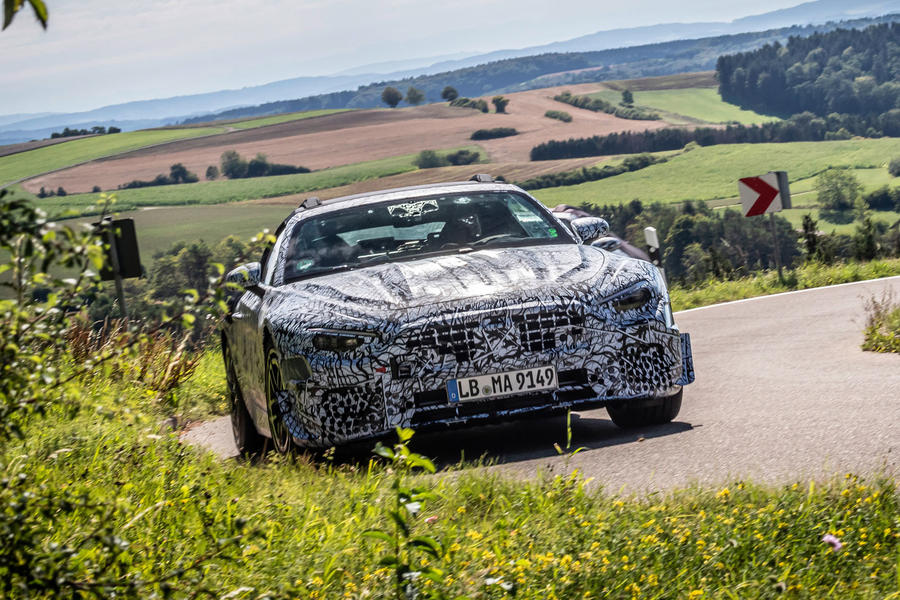 Early prototypes of the new SL were spied testing on track with the new platform underneath a shortened S-Class Coupe body. They give away little about the car’s mechanical set-up, which is rumoured to run a transaxle arrangement with a dual-clutch automatic gearbox integrated within the rear axle assembly, like on the GT. However, the overall dimensions of the engineering mules suggest the production version will be slightly larger than the existing SL, which is 4630mm long, 1870mm wide and 1310mm tall.

The adoption of the MSA platform is claimed to have had a positive effect on the styling of the new SL, whose proportions are said to be more in keeping with earlier incarnations of the classic roadster than the current model, which shares a platform with sedan models such as the C-Class, E-Class, CLS and S-Class.

A Mercedes source told Automotive Daily’s partner Autocar that the new SL receives a longer bonnet and more rearward-positioned cabin. “The new platform has given us more freedom,” the source said. “There’s more distance between the front axle and the front firewall. This gives it more traditional proportions.”

In a further departure from today’s model, it is also expected that Mercedes will provide the 2020 SL with a 2+2 seating layout. Autocar has been told that AMG is keen to give the new SL the same sort of practicality as the Porsche 911, with a set of rear seats capable of accommodating adults for short journeys or, alternatively, luggage as an extension of its boot.

The range is understood to start with an SL 450 EQ Boost model running a turbocharged 3.0-litre in-line six-cylinder developing around 272kW, along with an added 16kW in combination with an integrated starter motor.

Further up will be the SL 53, which will run a more powerful AMG-tuned version of the SL450 EQ Boost’s mild-hybrid drivetrain with around 320kW and added 16kW through electric assistance.

Among the V8-powered models will be the SL 500 EQ Boost. It is due to receive a turbocharged 4.0-litre V8 with a similar power output to the SL 53, but significantly more torque. Topping the range will be the SL 63. It is likely to be offered in two states of tune, with the most powerful model running a turbocharged 4.0-litre V8 capable of in excess of 450kW and more than 22kW of electric boost. It is unclear if Mercedes will continue with the V12-powered SL, although, given the potential output of the SL 63, it would seem unlikely.

Despite the SL’s market repositioning, it won’t completely abandon the luxury focus, so expect the interior to be almost as opulent as Mercedes’ other high-end models. It will be more driver-focused than cars such as the S-Class Coupe, but there could still be plenty of the brand’s latest driver assist systems drafted in, including its semi-autonomous Drive Pilot function.