The MINI Countryman plug-in hybrid is cheap to run, fun to drive and quiet in traffic.

The MINI Countryman Plug-in Hybrid is the only plug-in hybrid model in the British brand’s range, although there are more vehicles with plug sockets on the way – and there’s already the MINI Electric if you want a car without a petrol engine at all.

The Countryman PHEV (that stands for Plug-in Hybrid Electric Vehicle, by the way) was one of very few models of its type when it first arrived, but now it takes on models such as the Ford Escape PHEV, the Mitsubishi Outlander PHEV, and the Kia Niro PHEV (also available as a non-plug-n hybrid or fully electric), as well as plug-in hybrid hatchbacks such as the Hyundai Ioniq. It was updated in 2020 to bring it up to date and still represents an interesting option for those wanting to save money on fuel by plugging in. The Cooper S badge on the back doesn’t just signify that this is a top-of-the-range model, but that it’s nippy and agile as well: 0-100kph takes just 6.8 seconds because the 1.5-litre petrol engine and the rear-mounted electric motor produce a combined 162kW. The ALL4 bit of the name shows that it’s four-wheel drive as well, so there’s plenty of traction. As with all MINIs, it’s fun to drive as well.

As part of the update, the old car’s 7.6kWh battery pack was replaced by a new 9.6kWh battery. It emits just 39g/km of CO2 when the battery has charge and claims efficiency at 2.4L/100km.

Aside from the low emissions and everything going on under the metal, the Cooper S E Countryman ALL4 is a desirable car. Brisk and just as fun to drive as other models in the range, the Countryman will run rings around most rivals for driver satisfaction, as well as style and badge appeal.

It’s practical for families, too, even if there have been some small sacrifices to get the battery pack to fit. The rear seats are set slightly higher and no longer slide, while the boot shrinks to 405 litres. But the bench splits 40:20:40 and there are chunky roof rails for carrying roof boxes and cycle carriers.

The BMW Group eventually wants to offer every one of its models with the choice of petrol or diesel engines, plug-in hybrid or all-electric propulsion. The Countryman PHEV is a pioneer, checking three of these boxes and becoming the first MINI equipped with the fuel-saving technology. Its battery pack allows an all-electric driving range claim of up to 61km from a full charge, which is closer to around 45km in real life.

In official testing, this helps increase its fuel-economy figure to 2.4L/100km. It’s an impressive figure on paper, but real-world results will depend on how far you drive and how often you can top up the batteries. Drive less than 40km a day and charge the batteries every night and you’ll hardly use any fuel at all. Head further afield and once the battery charge is depleted, fuel economy will gradually drop to that of a conventional car.

The lithium-ion battery pack has a 9.6kWh capacity and recharging should take just over three hours from a household socket, reducing by an hour if a 3.6kW wallbox is used. The battery comes included in the cost of the car, with no additional leasing required. The battery pack is expected to last the life of the vehicle and has its own six-year or 100,000km warranty.

All power from the petrol engine is sent to the front wheels through a six-speed automatic gearbox. Pub trivia fans should note this effectively makes the Countryman PHEV the first rear-wheel-drive MINI when in ‘Max eDrive’ mode, which allows all-electric driving at speeds up to 126kph. Auto eDrive prioritises battery power below 80kph, but acts more like a hybrid, with the petrol engine chiming in for bursts of acceleration. There’s also a setting to favour the petrol engine and save battery power, coming in handy if you plan to visit an urban area later in your trip. 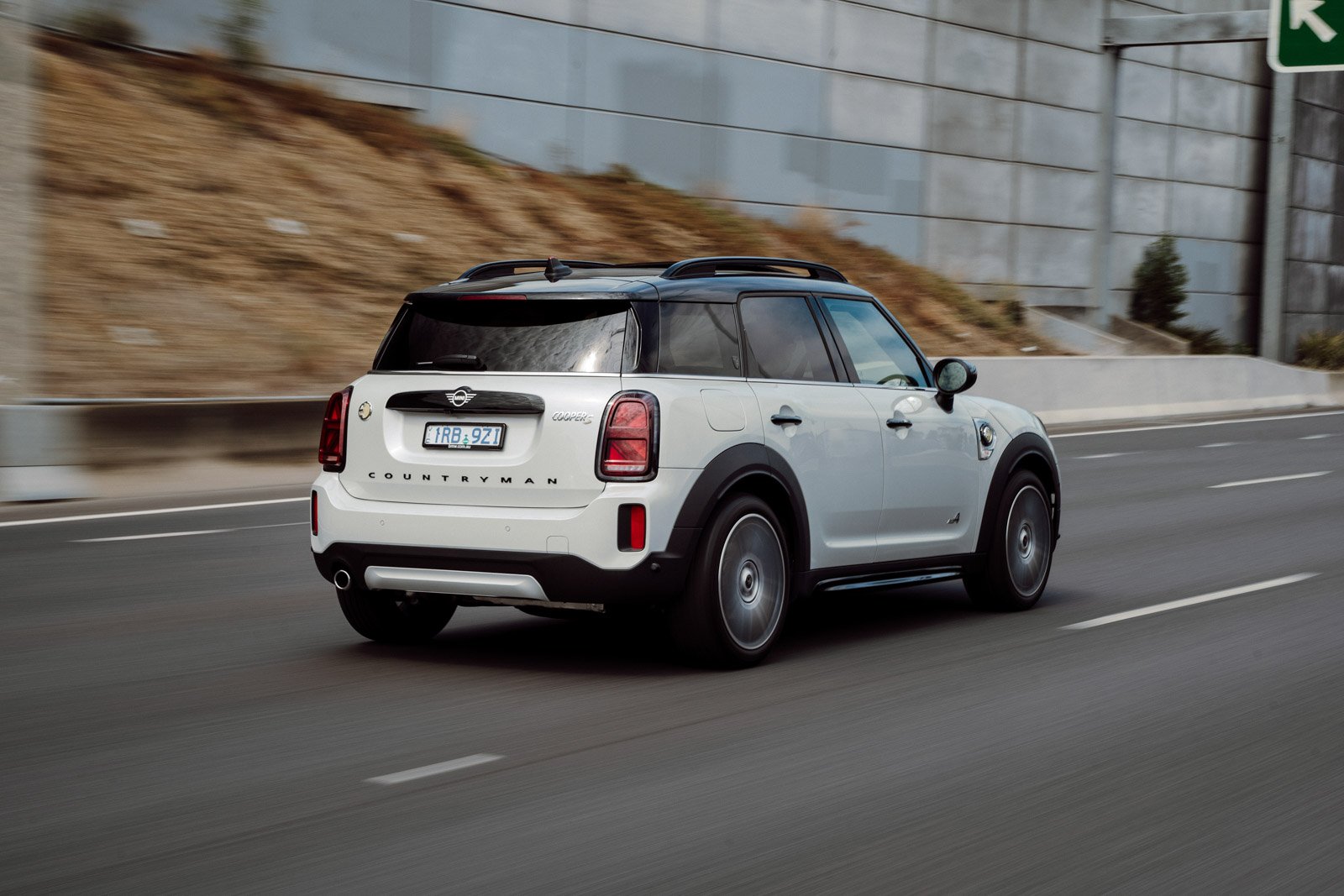 The boost from the electric motor gives the Countryman a surprising turn of speed, especially around town. However, there can be a slight hesitation as you accelerate and the car decides how to proceed, which feels a bit like turbo lag. MINI’s engineers have tried to make the plug-in hybrid’s handling similarly agile and precise to the standard model, and the result is one of the most fun PHEVs you can get your hands on.

We’ve praised the well built interior of the standard Countryman and nothing has been sacrificed here, with the same excellent quality and characterful round central infotainment display. Look closely and there are a few reminders of the hybrid technology under the metal, with a bright yellow start/stop toggle switch to press when you want to get going. The instrument gauges have been swapped for a 5.5-inch digital pod perched above the steering column, with a thin bezel and crisp graphics.

The Countryman PHEV rides smoothly, something that’s not always guaranteed in a plug-in hybrid. Often, engineers are forced to fit stiffer suspension to deal with the extra weight of the battery pack, but the MINI rides on par with other models in the range. Its upright shape means there’s some wind noise at motorway speeds, but it shouldn’t upset occupants much. It’s clear the Countryman (which shares its basic underpinnings with the BMW 2 Series Active Tourer plug-in hybrid MPV) was designed with plug-in hybrid technology in mind, because its interior space isn’t too badly affected. The main change is slightly raised rear seats, but the Countryman’s high roofline means there’s still plenty of rear headroom. This change does mean the back seats can no longer slide forwards and back, though.

By positioning the battery pack under the back seats and the electric motor under the luggage compartment, boot space has shrunk by only 45 litres, now measuring 405 litres and still easily beating the Toyota C-HR (377 litres). This is slightly smaller than the Kia Niro (427 litres) and the Mitsubishi Outlander PHEV has a bigger boot still (463 litres), but perhaps not by as much as you might expect given its boxy shape.

The rear seats split and fold in a 40:20:40 configuration, so it’s possible to travel with four adults and place long items like skis or snowboards between your rear passengers. One point to note is that the petrol tank has shrunk from 51 to 36 litres, but MINI claims the extra economy of the Countryman should boost driving range to help make up for it.

While it might seem risky to buy MINI’s first foray into plug-in hybrid technology, the brand’s parent BMW has spent huge sums of money on research and development and already implemented the technology in models like the BMW 330e, BMW i3 and BMW 2 Series Active Tourer with great success.