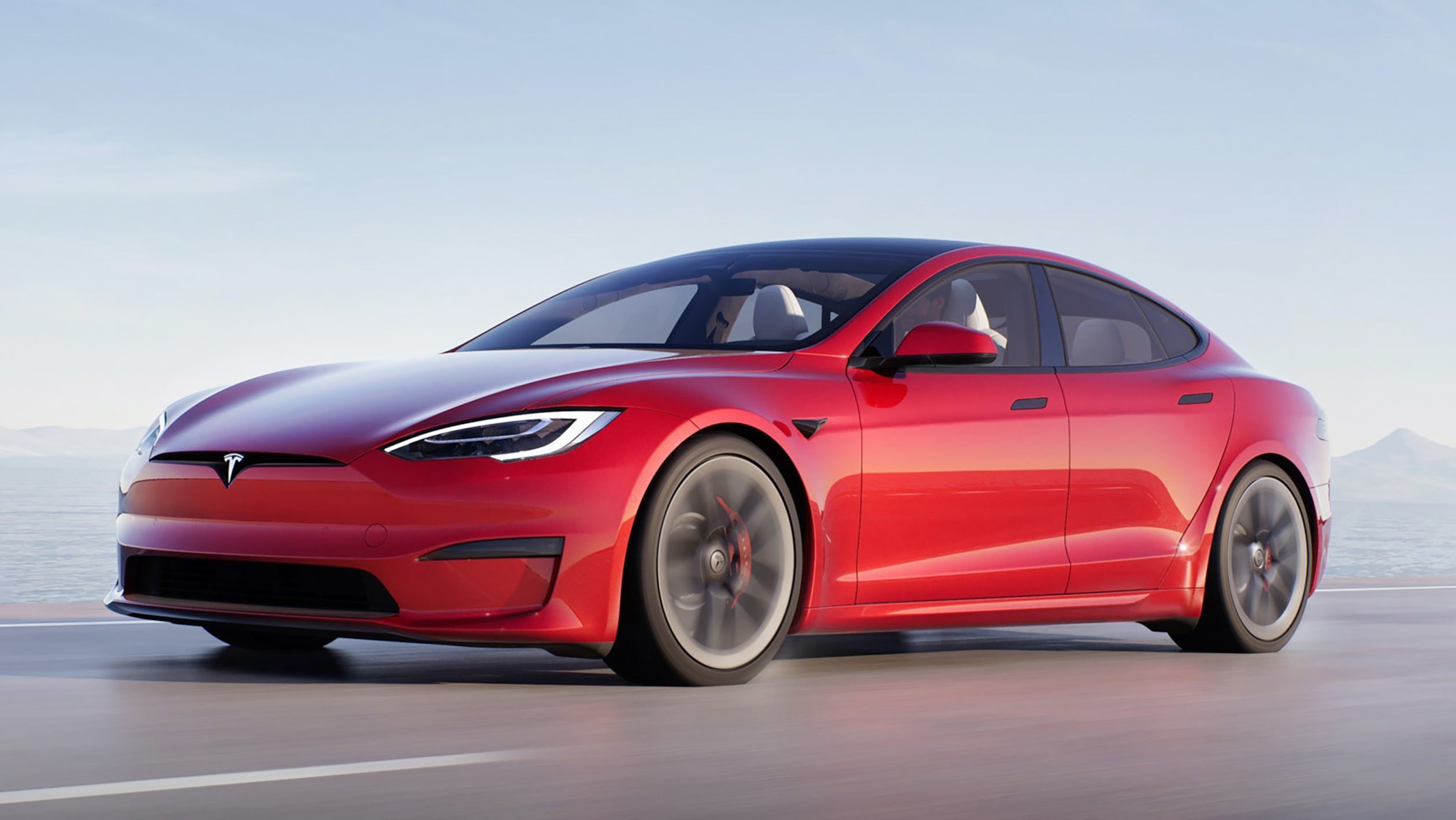 Range-topping version of the Tesla Model S officially unveiled, with a sprint time of 0-100kph in less than two seconds.

Tesla has launched the new Model S Plaid. It’s the flagship version of the firm’s long-lived pure-electric saloon, which has been designed to place Tesla ahead of rivals such as the Porsche Taycan Turbo S and the Audi RS e-tron GT.

The Tesla Model S Plaid is driven by the company’s new three-motor, all-wheel-drive electric powertrain – and the stats are astonishing. It develops 750kW and Tesla claims a 0-100kph time of 1.99 seconds, which is quicker than any road car on sale today.

The EV will also cover the quarter mile in 9.23 seconds, which the firm’s CEO Elon Musk says is faster than any factory-delivered road car on sale now. Find a long enough runway, and the Model S Plaid will hit a top speed of 320kph. And Tesla is keen to stress that all this extra performance hasn’t made too much of a dent in the Model S’s range. Thanks to updated battery technology, the Plaid will cover a claimed 627km on a full charge, and when the battery does need to be topped up, the firm’s newest 250kW rapid charging technology can add 301km of range in just 15 minutes.

When the new Model S flagship was teased earlier in the year, we were also expecting a longer-range 837km Plaid+ variant. This project has since been cancelled by Musk who, as usual, made the announcement to his large Twitter following.

Tesla’s goal was to make the Model S Plaid more than just a straight-line rocketship, so the company’s engineers have fitted a host of aerodynamic tweaks and chassis modifications designed to help handling and dynamic ability.

Cosmetic revisions include a deeper front splitter, wider side skirts, an enormous diffuser and a ducktail spoiler, the latter two elements helping to boost downforce. Tesla has also fitted larger brakes, lowered suspension, new suspension dampers and a wider track, along with a revised torque vectoring system, which will help boost agility.

The styling tweaks and lowered suspension also give the Tesla Model S Plaid the lowest drag coefficient of any production car currently on sale, at 0.208Cd. For comparison, the Porsche Taycan has a drag coefficient 0.22Cd.

The cabin has also been redesigned, with an unusual flight-yoke style steering wheel, a new digital gauge cluster, a 22-speaker stereo system and an enormous 17-inch landscape infotainment system, which Musk says is better suited to watching movies.

There are more wireless smartphone charging pads, with space for two devices up front and two in the rear. Rear-seat passengers also get their own screen mounted on the centre console, which can be used to either watch films or play video games.

Unusually, Tesla has done away with some pretty major controls, such as the gear selector and indicator stalks, with Musk saying, “generally, all input is error.” Once you’re in the car, the Model S Plaid automatically puts itself into drive and it can use the Autopilot system to know where obstacles are for when the indicators are needed. You still need to select reverse when parking but, once you’ve done it for the first time, the car stores the location so, if you park there again, it will automatically select reverse for you.

The tech-fest is backed up by some physical practicality tweaks, too. Tesla has redesigned the rear bench to give passengers more legroom and headroom by moving the front seats forward and increasing the angle of the rear seats’ backrests. There’s also a little less trim, which helps make the cabin look more airy.

Tesla has also increased its focus on safety, with Musk making the bold claim that, in the event of an accident, the Model S Plaid could soon have the “lowest probability of injury of any car ever tested.”

According to the US road safety authority, NHTSA, the five safest vehicles on sale in North America are all Teslas, with the Model S Plaid sitting in second place behind the rear-wheel drive Model 3.

Before the car’s official launch, Tesla lapped a Model S Plaid prototype at Laguna Seca raceway in California. The car set a time of 1:30.30, while Musk has said his ultimate goal is to make the Model S “achieve the best track time of any production vehicle ever.”

Tesla is also gearing up for a shot at the Nurburgring record. Last year, the firm claimed that a Model S Plaid prototype had lapped the Nordschleife circuit in around seven minutes and 20 seconds. An official lap time has yet to be released, but this preliminary time would make the Tesla more than 20 seconds faster than the Porsche Taycan.