Here we go again: The Great All-Rounder, back for the fifth time. Or, as it would perhaps be more accurate to say, for the third.

The first two Volkswagens of the R brigade were the R32 flagships of the Mk4 and Mk5 Golf, but what their thirsty 3.2-litre V6 engines and four-wheel drive gave in terms of personality and pace was rescinded in the form of nose-heavy chassis balance and flat-footed handling. Only the committed wealthy bought them.

Even so, when the decision was made that the Mk6 Golf R should adopt the four-pot Golf GTI motor, it was of course derided. What we didn’t realise in 2010 was that this switch was an essential step in the Golf R’s journey toward becoming the most broadly desirable (and also the most stolen) hot hatch on the planet. By the time the Mk7 Golf R hit our roads, no rival could match its combination of stability and finesse, or performance and comfort. All of which, you would think, leaves Volkswagen precious little room to manoeuvre here, with the new Mk8 model. And duly, there are countless elements carried forward, not least the trademark Lapis paint job. The 2.0-litre EA888 engine famous for its service in every hot Golf since the Mk6 is also reprised, albeit in fourth-gen trim and with 236kW rather than 221kW, now that Volkswagen has figured out how to increase the state of tune without failing WLTP emissions tests.

It makes this the most powerful Golf there has ever been. Torque also rises 41Nm to 420Nm, but in terms of straight-line speed, all is much as before: under the auspices of the launch control programme, 100km/h comes up in 4.7sec for the Mk8, while it was 4.6sec for the Mk7. That’s right. The flashy newbie is technically slower, but I think we’re all mature enough to handle the 0.1sec deficit. What might surprise you about the Mk8 Golf R is that it comes solely with a seven-speed dual-clutch gearbox, although in truth the Golf R hasn’t been offered in Australia with three pedals since not long after the Mk7’s mid-life refresh. (The Amercans can still choose to have the manual gearbox.) In the same vein, five doors rather than three are still the order of the day. And as with the regular Golf, the Mk8 R is fractionally wider, longer and taller than its predecessor. In dynamic terms, the knock-on effect is that track widths are up, if only by half a centimetre or so at each end, meaning the latest R appears no stockier than before. Kerb weight is also now 1476kg – up 46kg on the original Mk7 R of 2014, and 88kg more than the current GTI.

So what has really changed? Well, in 2019, Jost Capito, the then head of Volkswagen’s R division, fresh from his stint as CEO of McLaren Racing, insisted that the Mk8 Golf R, at that point more than halfway through its five-year development cycle, would feature neither four-wheel steering nor that darling of the modern mega-hatch set: a Drift mode. He was correct in only one of those statements, and so while the Mk8 Golf R can’t swivel its rear wheels to enhance agility, as can the Renault Sport Mégane, it does have a new selectable driveline preset that makes the handling more tail-led. It also includes another all-new mode, known simply as Special. Unlike Drift, which is purely fun-loving, Special sets the dampers and 4Motion four-wheel drive system to the same parameters Volkswagen used when the Mk8 Golf R lapped the Nürburgring Nordschleife 17sec quicker than its predecessor. Maximum attack, basically. Our car doesn’t have the R Performance Pack, or the titanium exhaust system from Akrapovic, although it is fitted with the DCC adaptive dampers, and also the new driveline that makes Drift mode possible in the first place. That driveline is where the Mk8 really moves on from the Mk7, namely with something called R-Performance Torque Vectoring. Where the Mk7 could vary the distribution of torque between the front and rear axles, the Mk8 can also then channel all of the available rear-axle torque to either side. The concept is similar to what Ford used for the Mk3 Focus RS, or what AMG devised for the A45. In essence, the Golf R can overspeed the rear outside wheel, while at the same time the XDS system can brake the wheel diametrically opposite (that is, the inside front). Although we’ve heard this sort of claim before, the system helps pivot the car and almost eradicate understeer, and is plugged into the behaviour of the adaptive dampers on a millisecond basis. 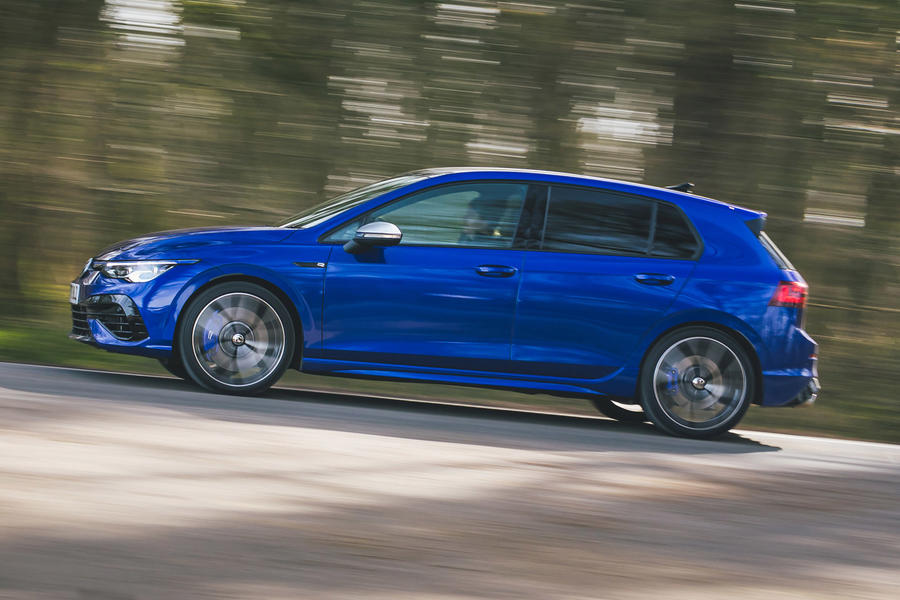 It’s a lot to take in on first acquaintance. Much easier to focus on the cabin, which is the same as for any Mk8, albeit with the usual R accoutrements. There’s plenty of Alcantara in here, notably for the door cards and seats, whose supportive and semi-bucketed form is arguably the finest Volkswagen has yet achieved. Blue fabrics and accents abound and the firm-rimmed steering wheel is now adorned not only with the new haptic-feedback buttons but also with sizable new sabre-like gearshift paddles finally commensurate with the car’s performance. They’re still a little apologetic in terms of their action but are an improvement over those still used in the GTI – the ones that offer about as much involvement as switching on the kettle.

What this cabin lacks is wow factor, although I suppose that is the Golf R’s thing – subtlety. However, given the money being asked, you might feel it’s still too ordinary. And too plasticky in parts.

But then you get going, and immediately start to relax, because the Golf quickly begins to show its class. That Mk7 Golf R class. If you’re anything like me, you’ll have heard that the spring rates for this car are up 10% compared with the Mk7 and that camber at the front axle has been increased, and you’ll have worried about the Mk8 being too unyielding, and serious. But that’s not the case.

In Comfort, rest assured that the new R has an excellent motorway gait, and one that translates seamlessly to B-roads, barring the rawness to the ride quality and road roar that occasionally bubbles up over poor surfaces. Could you live with this? Easily. Does the chassis still communicate that enjoyable sense of intent, even while trundling along? Absolutely. I’d have to drive the two back to back to be sure, but I’d also say the steering is more feelsome and gritty than that of the GTI. That extra camber? The lighter new aluminium front subframe? Possibly, but whatever the reason, the Mk8 Golf R steers really quite beautifully by today’s standards. The rack is light, precise and true, even as you ramp up through Comfort, Sport and finally, if you like, into Race. We’re running out of time here, and I want to talk about how this car corners, so take it as read that the performance would genuinely scare the new 4.0-litre Cayman GTS, but that the 6750rpm motor is faintly monotone, despite the synthetic sounds piped into the cabin. Gearshifts on a charge are trigger quick, but the driveline can sound strangely rickety at low speeds. Traction on dry roads is total, and gosh, the Mk8 R is agile, and clinical, but maybe it isn’t quite as carefree as its forebear in the way it dismantles a B-road. Maybe.

It is more fun, though. You’ll need to trawl through the touchscreen menus and put the ESP system at least into Sport to have the best from this four-wheel-drive chassis, but it’ll plaster a smile on your face when you do. Firstly, the way this Golf R gets into bends is sensational. The new brakes, with their 357mm (versus 340mm for the Mk7) front discs, are not only devastatingly effective but also intuitively progressive. It’s not difficult to feel like you’re getting your entry speed correct to the exact mile per hour, at which point the nose simply carves in, even riding as it does on nothing more ambitious than the standard-fit Bridgestones.

Thereafter, the driveline won’t entirely rescue you from the kind of clumsiness that deserves understeer, but the margin for ham-fisted error here is broad, and if you can establish any form of neutrality at all by the apex, the rear axle will then conspicuously drive the car out of the bend. Often with just a few degrees of yaw. What’s amazing is how authentic this feels. We seem to have got to the point where a transverse-engined hatchback can just about, albeit fleetingly, fool your internal gyroscope into thinking you’re driving a serious and properly rear-biased AWD sports car. Amazing. And just as well, given that asking price. On the basis of this test, the R Performance Package and Drift mode would seem surplus to requirements, and this car does have more about it dynamically than either the Mercedes-AMG A35 or BMW M135i xDrive, and comfortably so.

Indeed, this is the most entertaining and capable Golf R yet, which is saying something. But what’s also worth saying is that the sensational thoroughbred that is the BMW M2 Competition costs not much more and, before anyone cries foul, on paper has an even bigger boot. Food for thought, don’t you think?