Alfa Romeo has confirmed that its long-awaited second SUV, the Tonale, will make its debut in production guise on 8 February.

This new model from the Italian marque will be shown off to the public for the first time at the ‘La Metamorfosi’ (meaning The Metamorphosis in Italian) event in Italy, and the brand has teased the vehicle once again, before it is revealed in full.

Spy shots have been previously captured of the Tonale crossover ahead of its release – each time reducing the amount of camo on show. The last time it was spotted there were two development mules undergoing cold-weather testing. These images specifically showcase the mode’s headlights, front grille arrangement and tail light design.

Despite the disguise, this development car bears a clear resemblance to the Tonale concept unveiled at the Geneva motor show in 2019, featuring the same overall proportions and design cues. The bluff front end and characteristic horizontal headlight design remains, with a distinctive U-shaped running light signature inspired by the concept. The headlights appear identical to those seen in a previous leak of a production-ready Tonale. 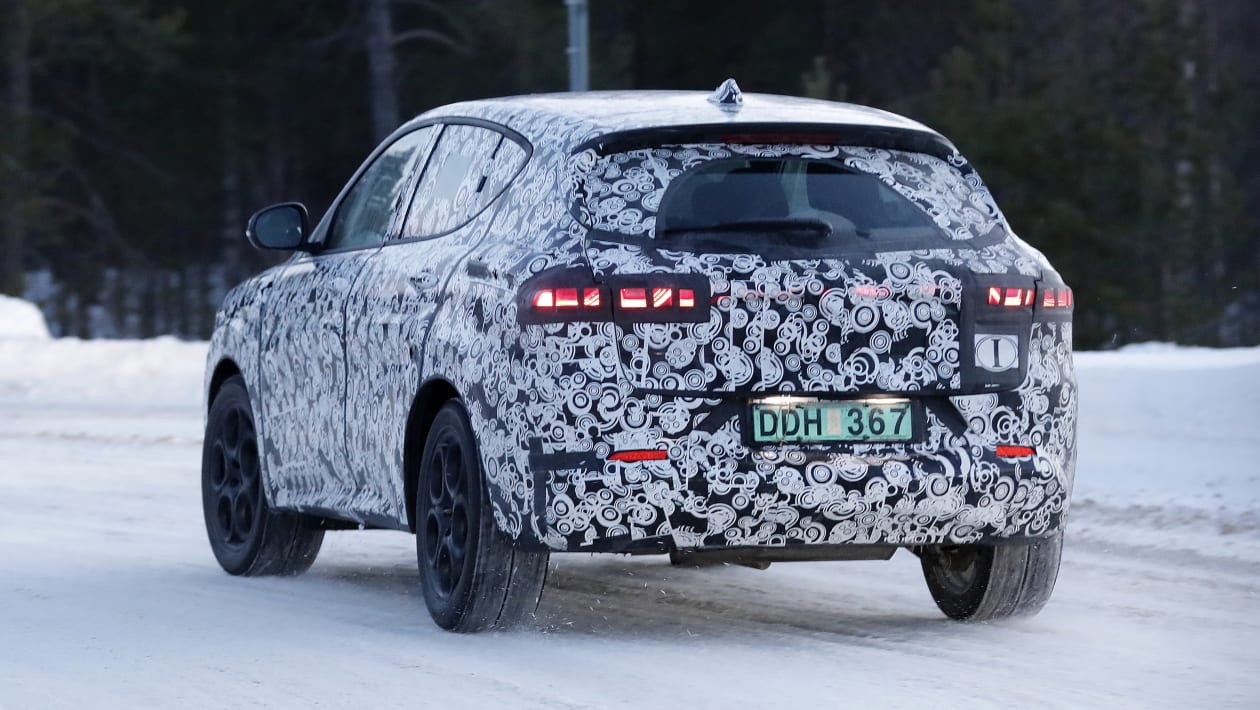 These test cars also give us a better look at the car’s front grille arrangement. A pair of small vents will join the headlights to Alfa’s trademark triangular grille in the centre, with a wide lower grille flanked by two narrow cutouts. Again, the design is broadly similar to the concept’s, and marries up with the leaked production example.

The wheels are also very similar to those seen on the Geneva concept car, appearing with the marque’s traditional five-hole design. Unsurprisingly, the concept’s blade-like door mirrors have been replaced with more conventional items, and gone are its sleek flush-fitting door handles. The swooping window line and shapely rear haunches have remained intact, however.

The rear end of the car receives a full-width light bar featuring 3D-effect LED running lights, with an Alfa Romeo badge in the centre. An integrated roof spoiler and a steeply raked rear window give a sportier silhouette, and the exhaust tips of the final car could be seamlessly integrated into the rear bumper, as seen with the concept. The entry-level Tonale will be fitted with a 95kW 1.3-litre turbocharged petrol unit, which will be combined with a dual-clutch automatic gearbox as standard.

The mild-hybrid petrol variant will also be linked to the dual-clutch auto. The Polish publication claims that this model will also produce 95kW, but this is unlikely. The new engine will be a 1.5-litre petrol unit combined with a 48-volt hybrid system, so an output of around 150kW is more plausible.

Topping the Tonale range will be a plug-in hybrid variant with four-wheel drive, using running-gear from the Compass 4xe. In the Compass, this pairs a 132kW 1.3-litre turbocharged petrol engine with an electric motor to produce 177kW, but the Tonale could receive more power than its Jeep relative.

When the Tonale launches in February of this year, it will go up against other small SUVs and crossovers such as the Renault Captur, Ford Puma and Skoda Kamiq.