We drive the Bentley Flying Spur Hybrid in LA ahead of its Australian arrival to see if the plug-in luxury limo is as majestic as ever.

Bentley’s move towards a zero-emissions future is well documented. Its Beyond 100 strategy states that by 2024 it plans to have an electrified version of every model in its line-up, with the first full EV due the following year. By 2026, the range will consist exclusively of plug-in variants, with Bentley looking to reach the goal of being a pure-electric car maker by the end of the decade.

This journey started just over 12 months ago with the launch of the Bentayga Hybrid – and next in line is the Flying Spur limousine. While the principle is the same, the set-up is slightly different; it ditches the Bentayga’s 3.0-litre engine for a newer, more powerful twin-turbo V6, mated to a 100kW electric motor. The result is a combined output of 400kW – almost 75kW more than its SUV sibling and just shy of the driver-focused 404kW Flying Spur V8. Thanks to the electric motor, the Hybrid picks up instantly, too.

Visually, there are just two tell-tale signs that this is the electrified Flying Spur: the Hybrid badges just ahead of the front doors, and the extra filler cap on the rear wing housing the car’s charge port. Otherwise, it’s business as usual. It’s the same story inside where, save for a few sub-menus buried within the tactile infotainment system and some Hybrid-specific pop-ups on the digital dials, this plug-in model is almost indistinguishable from the existing petrol versions.

That is, until you thumb the starter button on the centre console. The Flying Spur doesn’t fire into life like the V8; instead you’re greeted by the sound of silence. It’s so quiet, in fact, that on one occasion thought the car was switched off; the word ‘ready’ on the dash is the only giveaway this Flying Spur is ready to go. 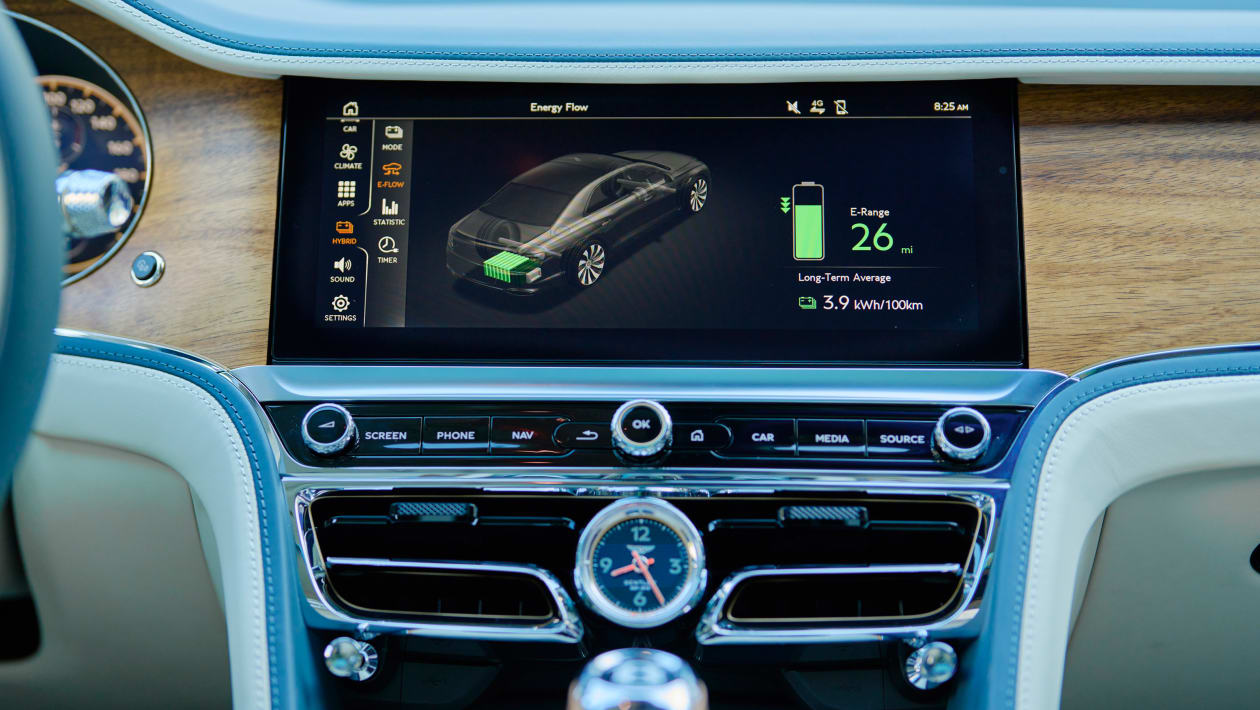 Bentley has yet to have the Hybrid officially homologated for sale in Australia, so details like efficiency and fuel economy have yet to be determined. It says it is aiming for a pure-electric range of “at least” 40km from the 14.1kWh battery, though on a full charge our trip readout was showing an impressive 51km – an area indicated on the car’s navigation system by what can only be described as a fluorescent fried egg.

Unlike an electric car, with its single power source, it’s not so easy to accurately determine the real-world range of a plug-in hybrid. Especially when, like the Flying Spur, its computers are so clever and complex – and the transition from petrol to electric so smooth – that you rarely feel the need to play with the three electric-specific drive modes.

This is especially true if you have a destination plumbed into the navigation system. Do this and the Flying Spur will analyse your route to determine when to use – and indeed, when to save – any remaining charge, with the goal of reaching your end point with a fully depleted battery. And while this kind of tech isn’t exactly new, we found it worked particularly well in the Flying Spur. Our initial 177km journey consisted of urban and highway driving, as well as some twistier roads towards the end – arriving at our destination with just 2km left on the range readout. Overall efficiency (according to the trip computer) was a respectable 7L/100km.

So while the claimed 40km range might not sound a lot, it enabled us to travel through much of downtown Los Angeles – as well as its myriad suburbs – completely emissions-free. Without doubt, it contributed to the relatively strong real-world fuel economy, too; we expect the V8 would’ve struggled to do better than 11L/100km on a similar run.

As a passenger, space in the back of the Flying Spur Hybrid is unchanged. It’s a big car and this translates to the rear cabin, but sitting behind a taller driver does limit outright space – especially if you like to recline the electrically-adjustable back rest. Doing so pushes the seat base forward, reducing legroom. Quality is exemplary, of course. 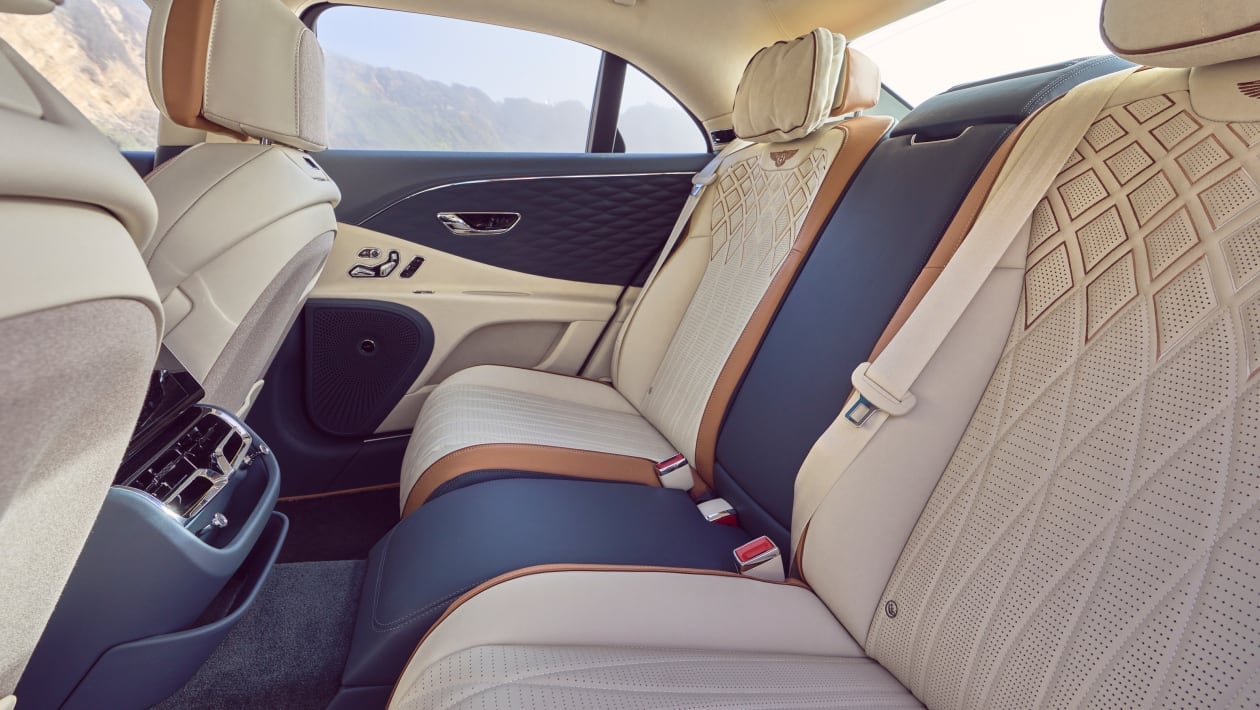 But what’s it like to drive? Quite pleasant, actually. A Bentley should be nothing if not luxurious – and gliding around the city in complete silence defines this mantra. In such a setting, performance is more than adequate using only the battery, with our car’s slightly grabby brakes being the only thing to disrupt the ambience at slower speeds.

Up the pace and the engine will fire into life without you or your passengers sensing so much as a vibration from under the bonnet. Watching the rev counter shows the petrol motor switching on and off like a switch – cutting out when you lift off the throttle, before re-engaging imperceptibly when you ask for more power.

Rougher concrete sections of Californian highway did disrupt the sense of calm inside the cabin, especially in the rear. And our car was fitted with the standard-fit 21-inch wheels, rather than the optional 22s. But the Flying Spur Hybrid is, on the whole, a very comfortable vehicle. It wafts along beautifully at higher speeds, appearing controlled enough to dismiss any sense of the car not feeling completely tied down. It’s a really impressive cruiser, in fact.

Things do start to come undone when you peel off the motorway and head into the hills. At just over 2.5 tonnes, the Hybrid can feel heavy during fast changes of direction; body control is still good for a car of this size and weight, but the V8 just feels more nimble.

It’s fast, too. As we mentioned earlier, the switch between petrol and electric is blink-and-you’ll-miss-it kind of stuff, so there’s never any hesitation when you put your foot down. Power delivery is instant but relatively linear, and the electric motor ensures it’s only one tenth of a second slower than the petrol car to 100km/h. The downside is that the V6 is nowhere near as tuneful as its eight-cylinder counterpart. The steering is perhaps a little lacking in feel, but it’s well weighted and predictable. The transmission is a dual-clutch unit and never once felt caught out during our drive; the shifts are silky smooth when you leave the gearbox to do its own thing, or fast and snappy when you switch to Sport, taking control via the steering wheel-mounted paddles.

Elsewhere, the Flying Spur is every bit as classy as its combustion-engined equivalents. Bentley claims there are 56 billion ways to configure a Flying Spur; the cabin is trimmed in only the finest materials, with the open-pore Koa wood in our car comfortably trumping the heavily-lacquered finishes you might find in cheaper rivals. The knurled touches to the switchgear and the wonderfully-cushioned, infinitely adjustable leather seats and pillow-like rear headrests justify the Flying Spur’s luxury price tag. We’re conscious that the comparisons we’ve made to this point have all been with the similarly-priced V8 petrol (Bentley is suggesting a modest three per cent premium for this Hybrid), rather than the W12. But in truth, the plug-in Flying Spur feels, to us at least, better aimed at those being driven than those who prefer to drive themselves – historically a job for the flagship car. But here’s the thing: just like the range-topper, the Flying Spur Hybrid is indisputably refined. Indeed, nothing says luxury like an electric motor – not even a W12. It’s also plush, comfortable, and beautifully engineered. What it lacks in cylinders, it makes up for elsewhere. 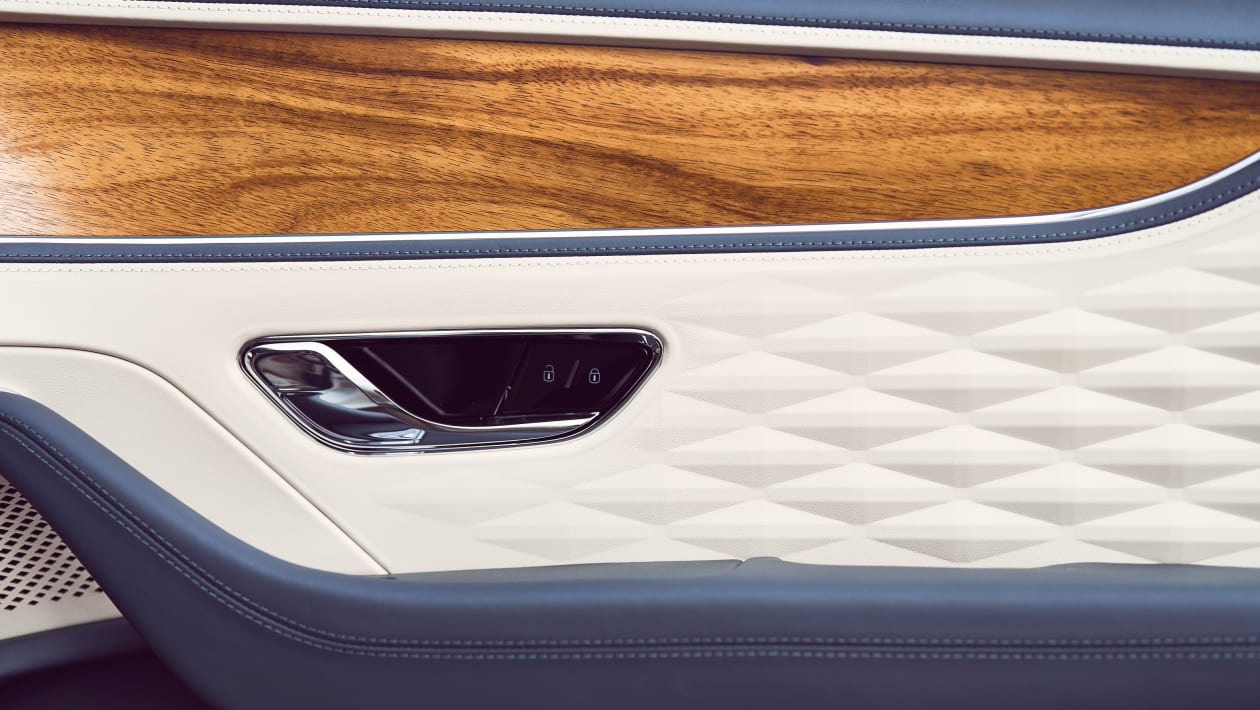 There will always be a majesty surrounding Bentley’s silky smooth W12 engine. But ultimately, the brand’s future is electric – and nothing is more luxurious than the sound and feel of running around on battery power alone. The V8 remains the driver’s Bentley, but – dare we say it – if you spend most of your time in the back, then the hybrid should be at the top of your list.