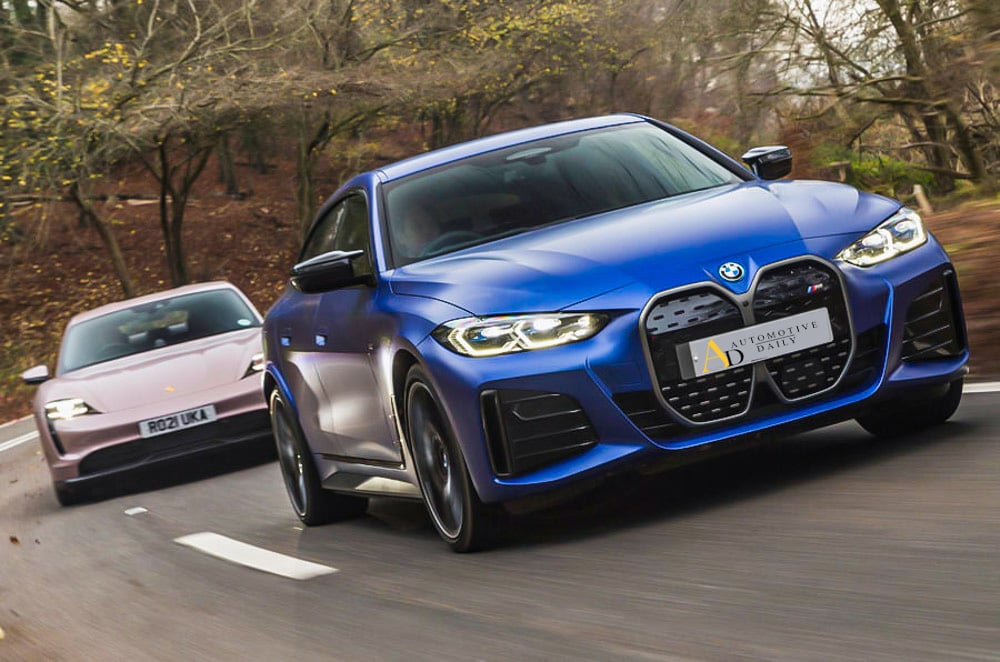 The Porsche Taycan has proven to be the most engaging EV in existence, while the new BMW i4 might well be the best all-rounder. Something has to give.

Blur. Not the band; the effect. The car world is changing so fast that even if you devour every road test report, read every analysis of investor calls with CEOs and tune into every press conference, things can still get a little blurry.

Some totemic examples of how unpredictable the industry has become. Only seven years ago, Audi won Le Mans using diesel, but today most manufacturers can’t ditch the stuff quickly enough. Five years ago, the late Sergio Marchionne told us that no Ferrari SUV would be forthcoming and the company would need to be sufficiently disciplined not to bastardise the brand; yet mere months from now, the Purosangue will arrive. And four years ago, you couldn’t lay hands on anything that could even loosely be called a driver’s EV (not unless you were prepared to wire seven figures to a 30-year-old Croatian); yet today, we’re comparing two ready-to-rumble, series-production performance sedans lavished with eye-watering R&D spend by two of the greatest names in the business and, apart from photographer Luc Lacey’s Cupra Formentor, there’s not a hydrocarbon in sight. Never mind who wins, the true lede here is the fact that we’re staging this kind of contest at all.

Alas, we need a winner, and though this is most definitely the Porsche Taycan’s fight to lose, on paper it’s eaten for breakfast by the new i4 M50. Costing $124,900 before on-road costs in Australia, our colleagues in the UK have put it up agains t the Taycan RWD ahead of either model’s arrival here (which will be soon). It is the pinnacle in BMW’s first range of all-electric sedans, but it undercuts even the entry-level Taycan by about $30,000. Despite this, with 400kW, it’s the more powerful car of the two and arrives with torque seeping from its millimetre-perfect shutlines. And it doesn’t stop there. The i4 M50 is more spacious inside and, with 520km of claimed range, compared with 425km for the Porsche (this one fitted with the optional range-extending Performance Plus battery), is marginally longer-legged. Turning up dressed in Frozen Berry paint over purple leather, our deeply unserious Taycan is taunting its adversary, and Porsche GB’s decision to deploy a pink car shows a cheeky confidence that has been earned. However, BMW clearly isn’t mucking about with the i4 M50. This contest won’t be easy, even for the car that now outsells the 911.

The cohesive nature of the i4 is clear the moment you slide aboard. The reason it looks so much like the 4 Series Gran Coupe is because it’s built on the same CLAR platform – an enviously good base for any sports sedan – and uses much the same shell. EV-specific adaptations include air springs at the back, extra bracing around the front struts, track widths that have been prised apart a touch and, of course, the presence of the battery pack. Compared with the basic 250kW i4 eDrive40, the i4 M50 then gets added stiffening and sits closer to the road. That 400V 83.9kWh pack, versus 800V and 93.4kWh in the Taycan, is secured to the floorpan with 22 bolts and drops the i4 M50’s centre of gravity considerably compared with the M440i Gran Coupe. It also adds – steady yourself – 550kg to the kerb weight and raises the driving position just a smidge, but a noticeable smidge all the same.

The good news is that the driving ergonomics remain GT-flavoured. Responsive steering and the subtly predatory gait are also hallmarks of fine ICE-powered BMWs, and all are evident in the i4 M50 right from the get-go. The bad news is there is an undeniable sensation that you’re carrying an anvil in each of the car’s footwells, and the force of the power steering has clearly been dialled up in response, with some loss of transparency as a result. Carrying 2.2 tonnes was always going to have consequences, wasn’t it? As for the new car’s cabin, I can take or leave the carbonfibre trim slathered over the dash of this example, but the perceived quality is superb. And sure, the integrated infotainment and instrument display is as subtle as a Times Square billboard, but the graphics are crisp and iDrive 8 sensibly retains a rotary controller. By comparison, the Taycan will feel smaller within and plainer, and it certainly has the less intuitive digital array. However, it will atone for that with an even more pedigree view forward over the front wings, fewer frivolous distractions and, praise be, a simple, central, circular speedo. The unsupportive seats aren’t so good. Meanwhile, rolling refinement is a dead heat. Both cars have the power to surprise, slipping along in disarming quietness, although our road test microphone shows the BMW to be one decibel quieter at 110km/h.

Really get going in the i4 and the sensation that you’re driving an M440i but on a slightly tacky surface disappears. Then again, it would, because the M50 has a Sport Boost mode that puts 400kW and 795Nm on standby. Summon it all and the car flinches then explodes forwards in a moment of neck-snapping brutality that’s immediately followed by an unnerving stillness, even as the speed piles on. That’s the paradox, and it will do for plenty of M50 owners – or at least their driving licences. The car’s perma-pliant ride (even on this example’s 20-inch wheels), fine isolation and lack of a snarling straight six or gearchanges mean there are no prompts to curtail your enthusiasm. Nail it at 80km/h and you will reach 100km/h just 0.7sec later. A second later, you’re at 110km/h. Supercar performance, in other words, although, beyond the fleeting initial over-rotation of the rear then the front Pirellis while the i4’s fast new DSC system gets on top of things, not much meat on the bone. Find some bends and the i4 M50 invites you more generously into its world. Seeking out the sort of incidental road chatter that gives steering systems added colour is pointless, but the rack’s blend of accuracy and weight change makes the i4 M50 more intuitive to whip through corners than anything so heavy has the right to be. Grip and iron-fisted control are the keystones here, though.

The M50 is just a little Audi in that respect, although the front motor chips in to stabilise the car only when necessary, so progress never feels too flat-footed. You can also spice things up by slipping the DSC into Dynamic mode. Turn in, let the M50 find its faintly nosey balance, then administer fat torque with the cold precision only electric motors can do, getting the car’s tail to flit wide, all while retaining immense forward drive. Like the M50’s straight-line performance, there’s polish to the handling but it’s all somewhat muted. This isn’t a car you feel like taking liberties with, which is something you can’t say of any M3 or M5.

So it doesn’t deliver M-division levels of intent, but the i4 M50 still hits most of the right notes. It’s a GT first, a sports coupe second, and it holds plenty of traditional fast BMW DNA, only with the pace and refinement dialled up and the sense of dynamic fluidity dumbed down. In this respect, the Porsche differs from its new rival, because it feels almost nothing like the Panamera. 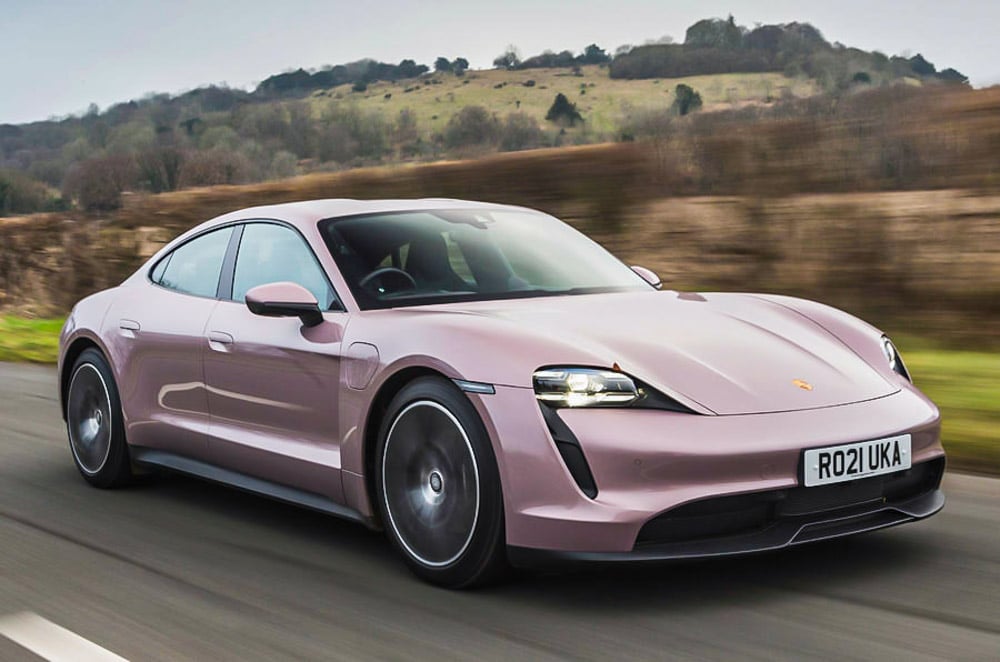 The fact is that the Taycan is ruthlessly good. No, this basic model won’t drop jaws with party-piece acceleration and the two-speed transmission attached to its solitary 350kW motor gets all lathered up at times in ensuring there’s enough performance on tap. And no, it doesn’t win the numbers game for practicality and usability. It’s more subtle than that, and the best way I can think to put it is that the Taycan is more analogue in feel than the digital BMW. Here’s an EV – perhaps the only EV – with which the driver has a relationship, rather than an arrangement that gets you from A to B with some mixture of speed, refinement and superficial fun.

It begins with cornering balance. Here, the rear-driven Taycan feels more mid-engined in style than anything else. In fact, it feels very mid-engined indeed. Despite the lack of roll, there’s a softness at both ends of the car but particularly at the front, where double-wishbone suspension and steel springs (not, note, the air springs of feistier Taycans) let that insectoid nose gently suss out and react to the road. This sense of delicacy doesn’t just hide but actually belies the 2130kg the car carries. The BMW is good in this way, but it can’t compete. On a related note, there’s a natural lightness in the steering, yet more discernible kinematics give the set-up a confidence-boosting steeliness absent from the i4. As the BMW driver disappears up the road, the Porsche driver won’t care. They will be too busy placing their car with fingertip precision and working with the chassis to carry momentum. The thing is, not only is that process more fun than point-and-squirt pace, it’s also more efficient.

Clearly there’s something a little magical about the basic Taycan’s genteel, thoroughbred persona. It lacks the faster M50’s brand of cue-it-up-then-pull-the-trigger power-on adjustability but has a more progressive accelerator pedal that works in both directions to deftly tweak your cornering line, much like the 718 Boxster’s can. In this respect, it’s also a more engaging proposition than the 4WD Taycans, which tend to feel a touch po-faced by comparison. 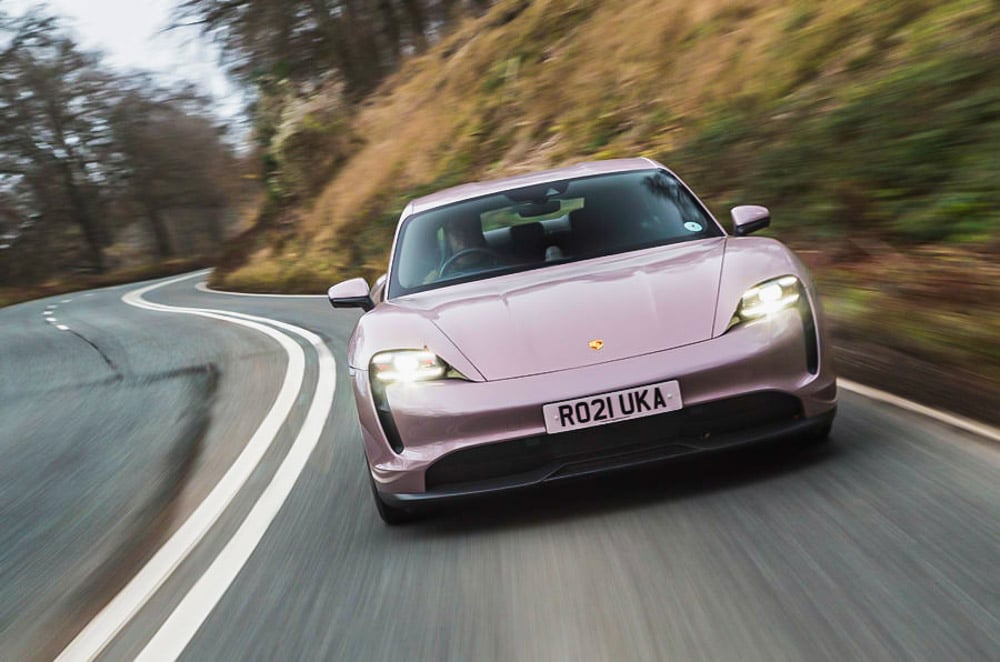 Not so with the RWD Taycan. Move the car’s mass around and it will indulge you in a touch of oversteer, but it will also feint apex-ward with a lifted ‘throttle’ or a lightly trailing brake. Proper handling, quietly delivered. The Porsche wields a knife so slim and sharp that it slides between the BMW’s ribs almost unnoticed. And to think: this lowliest Taycan derivative was originally intended only for China.

So we’ve found our winner, but if the headline is that we now have two credible driver’s EVs when before there was nought, here’s another. The electric age questions the appeal of ‘flagship’ models. How so? Look at the 3 Series. If there’s one reason to opt for the M3 instead of the best-of-the-rest model, it’s access to an M-division lump. Speed doesn’t factor. If you properly uncork it, the M340i is absurdly quick, and on most roads it’s also just as nicely balanced as the M3. It’s the character of the engine that makes the difference. Electric cars can’t make that distinction. As such, barring the spleen-displacing stabs of acceleration the 560kW Taycan Turbo S can deliver, our basic Taycan has much the same sensory appeal as its much more expensive brother, yet it’s a sweeter car to drive, because it isn’t so highly strung.

Maybe the eDrive40 would have fared better than the M50 today. Maybe, instead of waging power wars, the best performance EV makers will prioritise handling over easy-access, freakish speed. I hope they do, because while the M50 is a great EV, the RWD Taycan is more than that: it’s a great idea.