Eleventh-generation Civic goes on display in LA ahead of Australian sales beginning.

Honda has presented its new Civic hatchback, which will go on sale in Australian late this year, for the first time at the LA motor show.

Like the new HR-V and Jazz, the Civic will offer e:HEV system which pairs a 1.5-litre Atkinson cycle petrol engine with a pair of electric motors, producing 80kW in the Jazz and 96kW in the HR-V. Australia specification and pricing is yet to be revealed. The hot Civic Type R will come later, likely to be based around an evolved version of the current car’s ‘K20C1’ 2.0-litre turbo four, which produces 236kW – making it one of the most powerful front-drive cars on sale today.

The Japanese firm has taken an evolutionary approach for the 11th-generation Civic’s styling, though notably the new car adopts a fastback-style sloping roofline, ditching the current model’s prominent rear wing. The rear hatch itself is said to be lighter, and features smaller hinges for a cleaner roofline, while the A-pillars are two inches further back than on the current car and the wheelbase is 35mm longer.

The Civic has been revealed in North American specification, but is largely representative of what we will get in Australia next year; the most obvious styling change will be the removal of the amber indicator lenses. The interior will be largely replicated, too, with the Mk11 Civic adopting a minimalistic and “human-centred” cabin design similar to the new HR-V and Jazz. 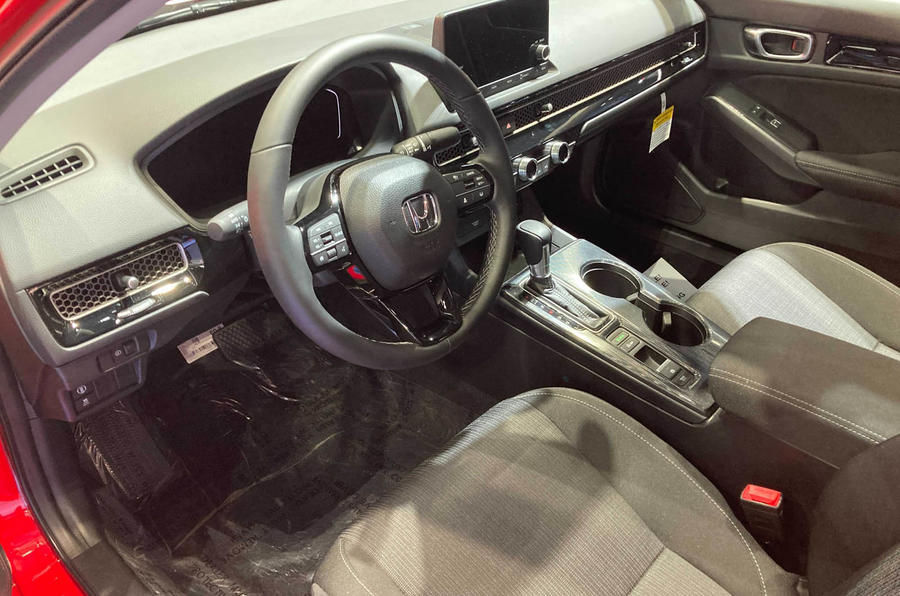 A honeycomb-style trim panel with integrated air vents runs the width of the dashboard, while a free-standing 7.0-inch infotainment touchscreen brings Apple CarPlay and Android Auto connectivity. In the US, top-spec cars get a 10.2-inch digital display, a Bose sound system, wireless charging and a larger 9.0-inch touchscreen, but Australian trim details have yet to be confirmed.

Honda claims the new Civic brings a 19% improvement in torsional rigidity compared with its predecessor, which is said to bring enhanced ride quality, handling performance and refinement, while new adhesive and insulation methods reduce noise, vibration and harshness.

The hatchback is also, says Honda, more fun to drive, courtesy of new ball joints and bearings at the front that “improve steering feel and self-centring”, a wider rear track that boosts stability and a 35mm-longer wheelbase for improved ride quality.