Porsche has confirmed that it will launch a hardcore 718 Cayman GT4 RS, releasing a video of the machine undergoing final evaluation testing at the Nürburgring.

Several development mules of the more focused version of the latest 718 Cayman GT4 have already been spied testing on the German circuit. Porsche will reveal the model, the first 718 to carry an RS badge, next month.

Porsche claims that a lightly disguised production version of the new 718 Cayman GT4 RS has lapped the 20.7km Nürburgring in 7min 9.300sec. On the shorter, 20.6km version of the circuit that Porsche has previously used for development, the model achieved a claimed 7min 4.511sec lap, which, the firm says, is 23.6sec faster than the regular 718 Cayman GT4. The laps were completed by test driver Jorg Bergmeister, and the car was fitted with a full racing seat and optional Michelin Pilot Sport Cup 2 R tyres.

Andreas Preuninger, Porsche’s GT model line boss, promised that new model has “everything that characterises a genuine RS: lightweight construction, more downforce, more power and, of course, an even higher level of responsiveness and feedback to driver inputs.”

Porsche has revealed no technical details of the machine, although both the new official images and previous spy shots showcase a number of bodywork additions for the RS. At the front, there are versions of the Naca bonnet air ducts similar to those on the 911 GT2 RS, while the rear quarter windows have been replaced by slatted cooling vents. Blanking plates at the front suggest the hardcore Cayman will gain similar wing-mounted air outlets to its 911 GT3 RS sibling.

The man in charge of the 718 and 911, Frank-Steffen Walliser, told Autocar at the Frankfurt motor show in 2019 that he would “definitely” like to see a faster and even more focused RS version of the new 718 Cayman GT4 but that the decision hinges on prioritising development resources within Porsche.

“Everybody’s asking for the RS,” Walliser told us. “Can I imagine a GT4 RS? Sure I can. That’s not to say we will make a decision on it yet, as it is a challenge. Would I like such a car? Yes, definitely! Would I like more horses? Yes. But we need to put the resources where the market is; it would be a lot more expensive than the normal one.” 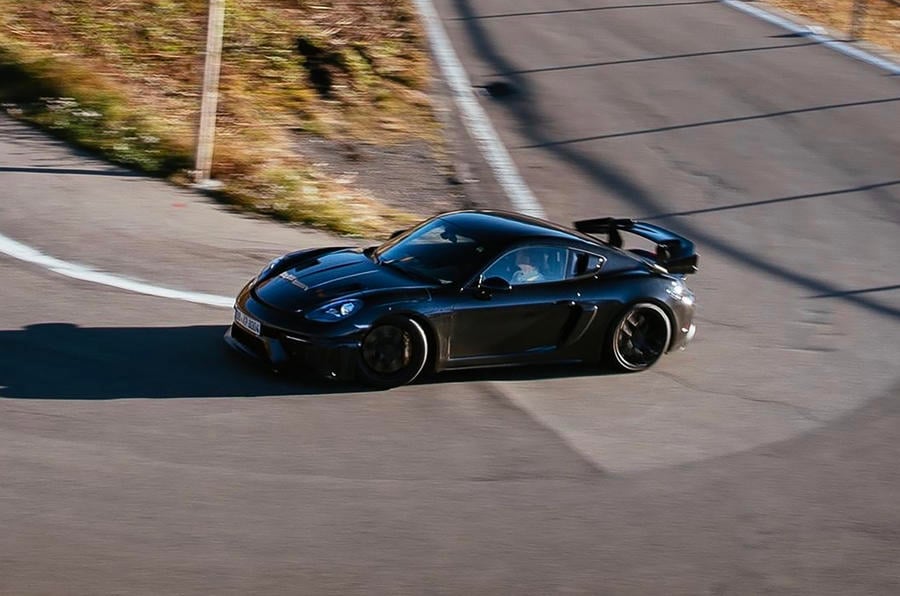 Porsche has never made a GT4 RS, previously suggesting such a model would be too close in price and performance to 911 GT models. But the new 4.0-litre flat six found in the latest GT4 forms part of an all-new engine family, and it’s expected that Porsche will spin off further variants of that unit to justify the investment.

It’s understood that the brand is looking to reintroduce the flat six to more mainstream Cayman and Boxster variants as part of a facelift. Although Walliser would only confirm that Porsche has “started the thinking process” on this, he acknowledged that the US market has been less welcoming of the current four-cylinder models than hoped. “American customers aren’t asking for four cylinders, they’re asking for four litres,” he said.

Although Porsche is working on a new electric equivalent to the Boxster, speaking in 2019 Walliser downplayed speculation that it would join the glut of newly launched electric hypercars with its own take on the formula – for the time being, at least.

Pouring water on the claims made by manufacturers such as Rimac and Lotus, Walliser said: “We’ve seen a lot of studies of electric hypercars. For me, the proof is when it’s on the street with a licence plate. Does an EV hypercar work? It’s like saying to me that a drag racer is a suitable sports car. For sure it’s perfect from 0-100, but to make it usable and do several laps of the Nürburgring wouldn’t work with the technology at its current state.”