The vehicle that Australian buyers know as the Volkswagen Caravelle can trace its roots back to the iconic ‘split-screen’ VW Type 2 van of the 1950s. Now, for the first time in the model’s history, the passenger version won’t be based on the same underpinnings as the cargo model. And in another first, it’s going to be available with an electrified powertrain.

The current Volkswagen Transporter van (known as the T6) is set to continue on sale for some time, before being replaced by a sister model of the next-generation Ford Transit Custom. For the T7 generation of the passenger version, however, there’s a wholesale change. Firstly, it’s going to be based on the same ‘MQB’ platform that underpins many of VW’s current passenger cars, including the Golf hatchback and Passat sedan. Secondly, the Caravelle name is being retired in favour of the Multivan moniker that has long been used in Europe. Revealed earlier this year in June, Volkswagen Australia said the T7 is under consideration; likely once the current generation model has run its dash, the T7 will be the replacement.

It goes on sale in Europe in early 2022 and we have had the opportunity to drive a pre-production example in the model’s home market of Germany, fitted with VW’s familiar 1.4-litre eTSI petrol-electric plug-in hybrid engine. Here, it makes 160kW, falling between the 150kW output of the Golf eHybrid and the 180kW made by the high-performance Golf GTE.

The Multivan is 1.94 metres wide and 1.9 metres high, while two different body lengths (4.97 and 5.17 metres) will be offered. Likewise, the full engine range (which will eventually include 1.5 and 2.0-litre TSI petrols and two flavours of 2.0-litre TDI diesel) will be available too. 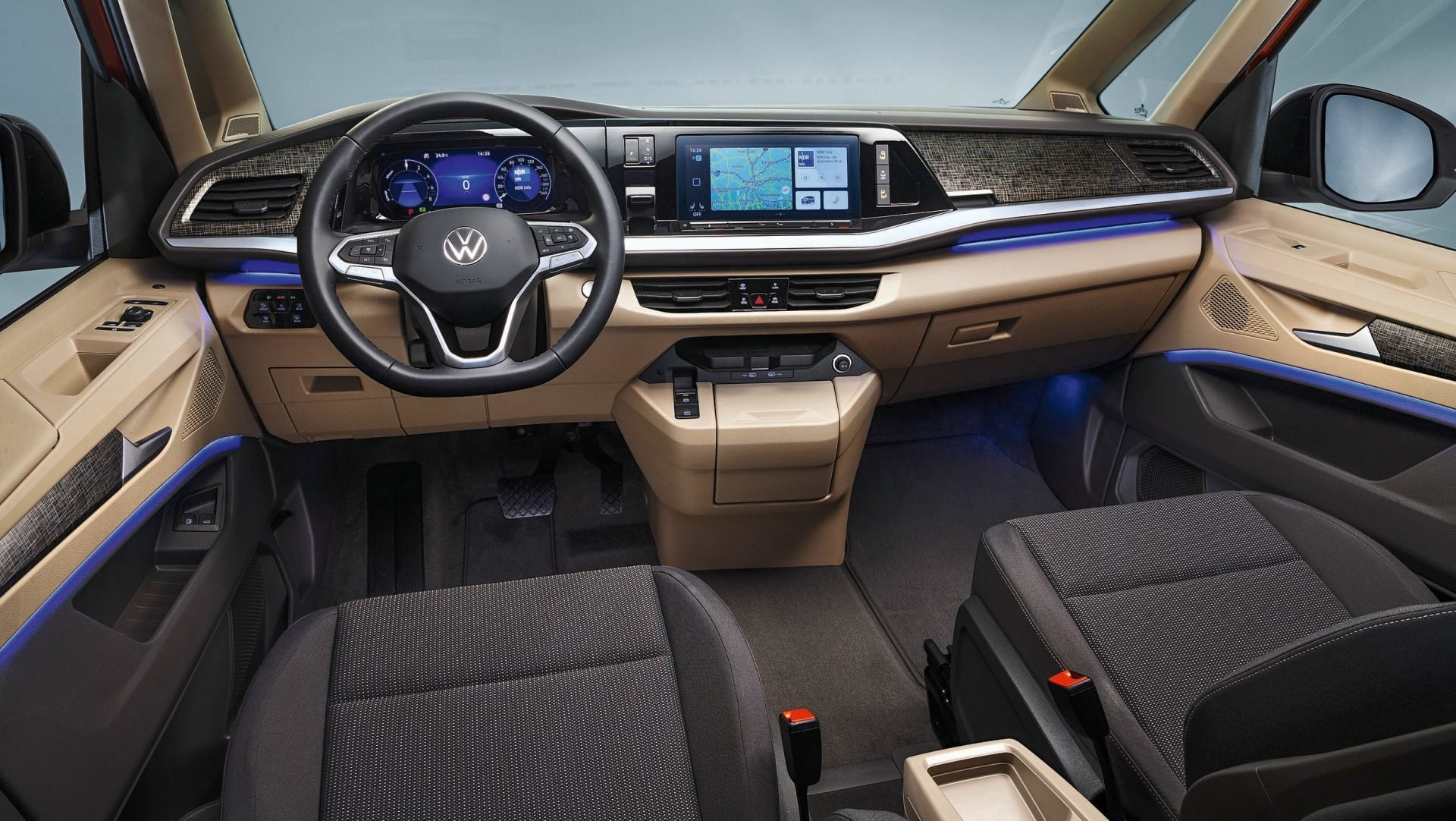 On the practicality front, sliding doors on both sides of the car are standard, as is a seven-seat setup, with two seats in the second row and three in the third. The middle pair can be rotated 180 degrees for a conference-style layout, while a multifunction table on tracks can be moved to any row. The seats themselves are easier to adjust and remove than before, partly thanks to weighing 25 per cent less than those in the previous model.

The more utilitarian eight or nine-seater layouts available with the Caravelle will not be on offer this time around. Cargo volume can be up to 3672 litres if you remove both rows of rear seats (4053 litres with the longer body length), dropping to 1844 litres if you fit just the second row and 469 litres with all seats in place. Like other Volkswagen models using the 1.4-litre plug-in hybrid powertrain, a six-speed dual-clutch automatic gearbox is standard on the Multivan eHybrid. In addition, its 13kWh battery stores enough power to cover around 50km in zero-emissions, fully electric mode. On the road, whether you’re running on the electric motor or the engine, smoothness and comfort are the order of the day, which isn’t surprising when you consider the platform the new Multivan sits on. Precise steering and good suspension (with optional adaptive dampers) add up to deliver a more sophisticated driving experience than the old van-based Caravelle ever could.

The one thing that spoils the experience is the now-familiar frustrations inherent to Volkswagen’s latest infotainment setup, including unwieldy menus, hesitant responses and annoying slider controls. We’ve commented on this in both the Golf and ID 3 hatchbacks; word is Volkswagen recognises the issues and has improvements in the works, so the situation could be better in final production examples of the Multivan.

In its home market of Germany, the Multivan eHybrid starts from €57,174, which equates to just under $92,000 at the time of writing – that’s expensive but is for the plug-in hybrid version, and SUV PHEVs like Mitsubishi Outlander already cost $50-60,000. Hybrid seven-seater SUVs such as the Toyota Kluger and incoming Kia Sorento PHEV may also be a consideration, although none will match the sheer versatility and carrying capacity of the Multivan.