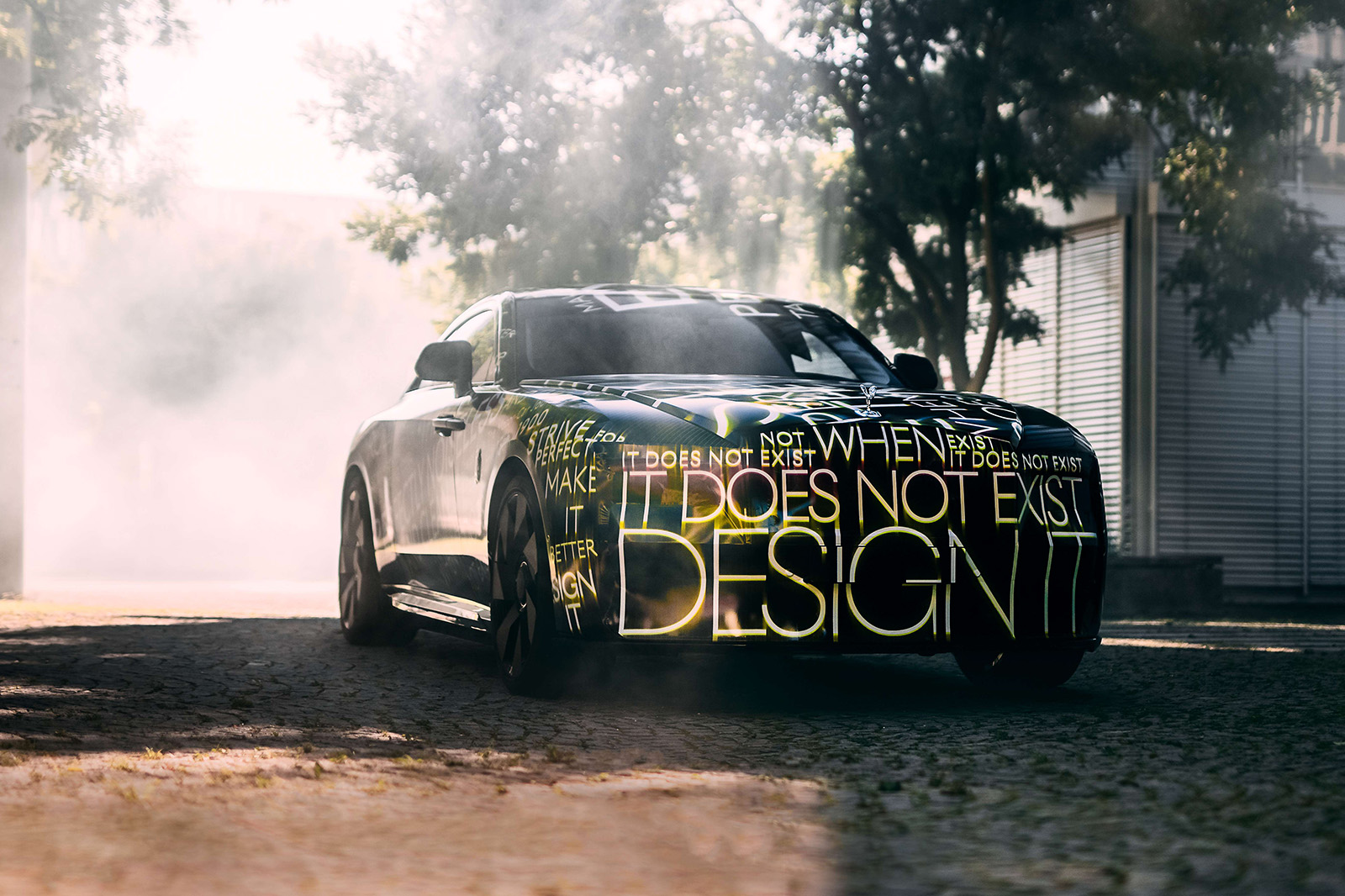 Rolls-Royce will launch its first series-production electric car in late 2023 and has pledged to phase out combustion engines across its entire line-up by 2030.

The first product to emerge from this rapid-fire electrification strategy will be the all-new Spectre, which has been previewed ahead of the ‘imminent’ start of what will be a highly publicised on-road development programme.

Seemingly based on the Wraith coupé, the development prototype is adorned with one of the best-known quotes from company co-founder Charles Rolls: “Strive for perfection in everything you do. Take the best that exists and make it better. When it does not exist, design it.” The quote’s presence is likely to be a nod to the Spectre’s totally bespoke mechanical make-up, which, Rolls-Royce claims, will be “free of any group sharing strategy”.

Rather than using the Cluster Architecture (CLAR) platform that underpins parent company BMW’s new i4 and iX EVs, Rolls-Royce is sticking with the modular ‘Architecture of Luxury’ aluminium spaceframe, used for the current Phantom and Cullinan, that will eventually underpin all Rolls-Royce models.

Company CEO Torsten Müller-Ötvös explained that the platform is “scalable and flexible”, allowing for its use in a variety of vehicle segments and “was created to form the foundation of not just different internal combustion engine models, as it now does with Cullinan and Ghost, but models with completely different powertrains.” He said the platform – which brought significant improvements in terms of weight, refinement and rigidity to the eighth-generation Phantom – was developed from the start to accommodate an electric powertrain, in addition to the BMW-developed V12, which has featured in Rolls’ line-up in various iterations since 1998.

Details on what exactly will power the Spectre remain under wraps, and when pressed  Ötvös said only: “We would never use an existing car from the BMW Group and convert it into a Rolls-Royce. That doesn’t work for us.” However, it stands to reason that the 450kW-plus twin-motor system deployed in the forthcoming iX M60 could find its way into the luxury brand’s models, as it roughly matches the output of the Goodwood firm’s twin-turbocharged 6.6-litre V12.

As for the design of the final product, Ötvös suggested to Automotive Daily’s exclusive partner Autocar that prototypes will give further clues when they hit public roads in the coming weeks, but “what you basically see is what you will later get”. Camouflage obscures most of the test car’s defining features, but the CEO confirmed that it will retain its “fastback-oriented” design into production, which means it will initially sit relatively unrivalled in the nascent electric luxury coupé segment. A series of test cars will be built for the two-year testing programme and will cover more than 240 million kilometres, equating to roughly 400 years of use, Rolls-Royce says. The beginning of on-road development comes just over a decade after the firm showed off the experimental Phantom-based 102EX concept, with a twin-motor powertrain providing 286kW and a 71kWh battery pack giving a claimed 200-kilometre range.

The much more radical 103EX concept arrived in 2016 with nearly double that power output and a raft of clues as to how the company will adapt its traditional design cues to suit electric cars.