The new second-generation Volkswagen Amarok ute is almost here, and here’s the latest teaser of it ahead of the July 7 reveal.

The Volkswagen Amarok is getting ready for its full reveal on July 7, and in anticipation of that moment VW has released another small teaser, this time showing the ute’s tailgate with a ‘V6’ badge and ‘4Motion’ lettering.

The brand has also confirmed 3.5-tonne braked towing capacity and up to a 1.2-tonne payload.

At the rear of the new #Amarok, the model's name is embossed in large letters. A powerful design with a strong statement: The premium pickup from #VWCV is driving in front of you! But that's just one of its many design and technology highlights. #WeTransportSuccessFreedomFuture pic.twitter.com/rySRmlnOkJ The short video first shows the IQ Light, an optional extra for the new Amarok, integrating active full-beam dipping and cornering lights. The video then pans out to reveal a full (albeit shadowy) outline of the upcoming 2022 Amarok. It looks like the new Amarok won’t deviate too much from the original when it comes to the styling; the grille will incorporate the VW logo, albeit in a slightly slimmer form. We can also see a grab handle in the truck’s load bay. Previous images of the VW Amarok in testing have also revealed it’ll feature a set of side steps, along with a distinctive two-tone rear bumper and ‘Amarok’ script pressed into the tailgate.

VW’s new workhorse will share its underpinnings with the next-generation Ford Ranger. The Amarok is one of a number of new, jointly developed commercial vehicles as part of a tie-up between the two brands that will see pick-ups, vans and some van-based passenger cars revealed over the coming years. The overall silhouette of the Amarok is a clear indication of the two utes sharing the same platform. The Amarok will be larger than its predecessor, 100mm longer with a total body length of 5350mm. However, the wheelbase grows even more, by 175mm to 3270mm. VW says that this results in substantially more room in the cabin for passengers, while the shorter overhangs mean it is more capable off-road than before. Total payload increases to 1.2 tonnes, while more engine and transmission variants will be capable of achieving a 3.5-tonne braked towing capacity.

An interior sketch gives us a glimpse at the pick-up’s interior, revealing a completely new dashboard design that features Volkswagen’s latest steering wheel and its newest “Virtual Cockpit” digital instruments. A new central infotainment system also features, and it appears the brand will retain some physical switchgear, unlike in some of its latest passenger models. Volkswagen describes its Ford Ranger and Toyota Hilux rival as having “a completely new appearance inside and out” and “even more extensive equipment on board”, including “significantly more driver-assistance systems” and new connectivity features. The company also claims it will feature “innovations that have not been seen before in this segment.”

Technical details for the Amarok are still thin on the ground, but VW has confirmed that the ute will be powered by a turbocharged V6 diesel engine, already revealed for the new Ranger. Its chassis sibling, the Ford Ranger, features a 3.0-litre unit, and it’s all but certain that the same powertrain will be used in the Amarok. Like the Ford, the engine should be linked to a 10-speed automatic transmission and a new permanent four-wheel-drive system, which promises to make the new Amarok faster and much more capable than the previous-generation model.

Entry-level versions of the Amarok will likely be powered by one of Ford’s turbocharged 2.0-litre diesel units. The new Ranger is already offered with updated versions of the previous model’s four-cylinder units – and there’s little chance that Volkswagen would re-engineer the platform to suit its own four-cylinder diesels, because the cost would be prohibitive. 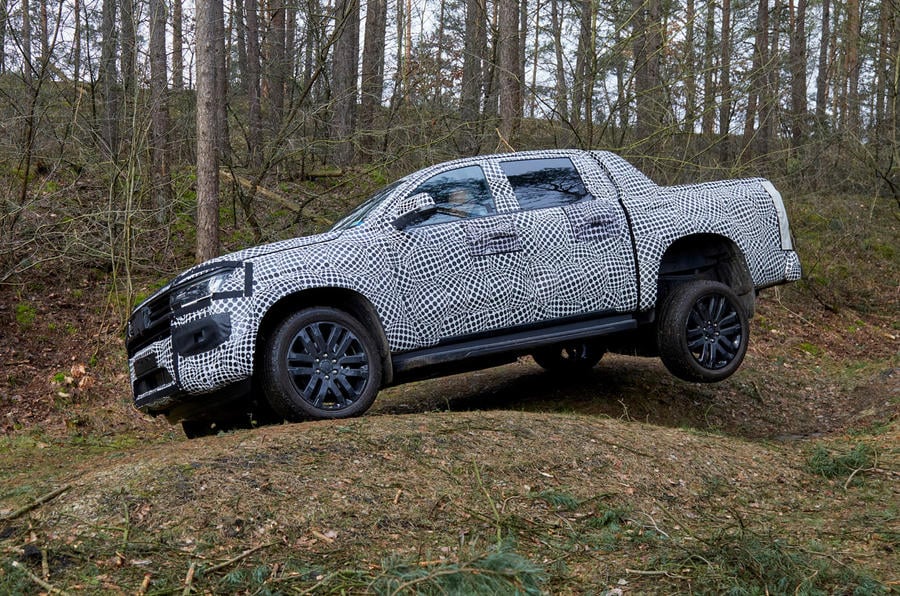 There are plans for further expansion, so it’s likely that Volkswagen will follow in Ford’s footsteps and launch a pure-electric flagship version of the Amarok. Lars Menge, Volkswagen Commercial Vehicles product marketing boss, said: “In terms of drive system we are continuing to use highly efficient TDI diesel engines for the new Amarok.

“And there will be a powerful V6 TDI available in the future too, plus further power units specific in each case to the market. In other words, depending on the market the Amarok will be moving forward efficiently and powerfully as a diesel or petrol vehicle.” Volkswagen has also confirmed some details about the next Amarok’s production plans. It’ll be built in South Africa and Argentina, and will be exported globally from those two locations. By contrast the previous model had a production centre in Hannover, which supplied the European market with vehicles.

Volkswagen and Ford confirmed plans to collaborate on the engineering of commercial vehicles and ute in 2020, as part of a large-sweeping tie-up between the automotive giants across a number of aspects of their businesses. “Volkswagen Commercial Vehicles has taken a major strategic step by establishing its cooperation with Ford. The successor to the Amarok will be one of the first fruits of this collaboration,” said Volkswagen Group CEO Herbert Diess at the time.