Following extensive testing the Valkyrie is seen on the open road near Aston Martin’s Silverstone facility. 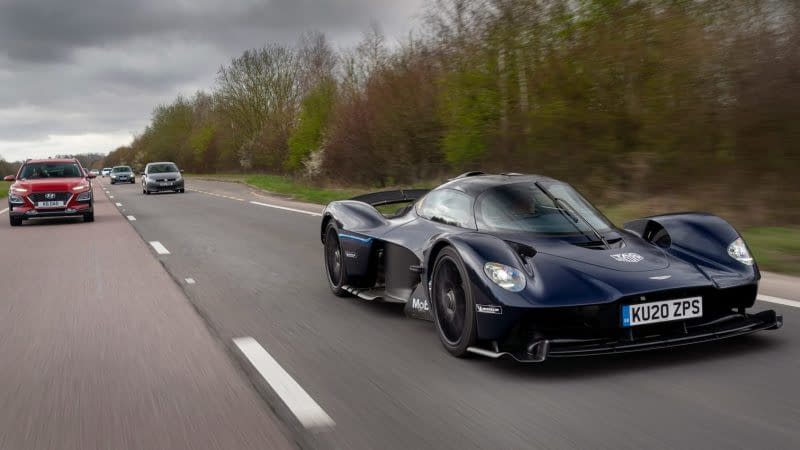 Our very first glimpse of the Aston Martin Valkyrie in motion came last year, with the flagship hypercar taking to the circuit at the 2019 British Grand Prix with test driver Chris Goodwin at the helm. Ahead of first scheduled deliveries in Q2 of this year, the hypercar has hit public roads for the very first time.

The drive saw Goodwin pilot the Valkyrie on Northamptonshire roads surrounding Silverstone, and came not long after the launch of an additional two prototypes, as the model advances along its development programme. Goodwin said: “To have three cars now running will see the rate of physical development for this exceptional hypercar increase exponentially.”

Aston had previously revealed the Valkyrie’s design and the specification of its incredible V12 engine. We’ve seen – and heard – the new naturally aspirated V12 in action, and we know that the 6.5-litre V12 will produce a staggering 745kW at 10,500rpm, making it the most powerful naturally aspirated road car unit ever. It also means the engine will deliver an astounding specific output figure of 114.7kW per litre. For context, a Lamborghini Aventador SV’s naturally aspirated V12 produces 83.6kW per litre. Torque for the Valkyrie motor is rated at 740Nm at 7000rpm.

This is of course not including the KERS-style hybrid assistance, which adds a further 120kW and 280Nm to the powertrain, creating headline totals of 865kW and 890Nm. The electric motor and battery packs have been developed with help from electric supercar manufacturer Rimac, which is quickly becoming the industry’s go-to supplier of high-performance electric motors.

The new information comes with yet another preview of the car’s engine sound, featuring the Valkyrie’s Cosworth-developed V12 running on a dyno. The engine blitzes through revs startlingly fast and makes a noise similar to that of an early 1990s V12 F1 car.

But the Valkyrie is far from nostalgic – it’s been conceived by Aston Martin and Red Bull Racing and will borrow cutting-edge F1 tech, not least the KERS-like electric boost. The car will need all the F1 influence possible, because it will go head-to-head with the Mercedes-AMG Project One – with its full F1 turbocharged V6. Only 150 Aston Martin Valkyries will be built, with 25 track-only editions set to follow soon after. The price for the road-going version in Australia will be somewhere between $4m and $6m.

The most recent batch of images released of the Aston Martin hypercar show it in near-finished form with production-ready lighting and a full interior. Throughout the design process Adrian Newey, chief technical officer at Red Bull Racing, continuously honed the Valkyrie’s aerodynamics, which were subsequently translated into the Valkyrie’s overall design by vice president and chief creative officer Marek Reichman’s team at Aston.

A quick glance at the Valkyrie not only confirms Newey’s influence, but the importance Aston Martin has placed on aerodynamics to achieve the incredible performance it will undoubtedly deliver. Because the car is built around a carbonfibre tub, Newey has had greater scope to create the slippery shape and integrate aero elements such as the vast Venturi tunnels underneath the car that deliver huge downforce, rendering heavy active aero systems and drag-inducing wings obsolete. 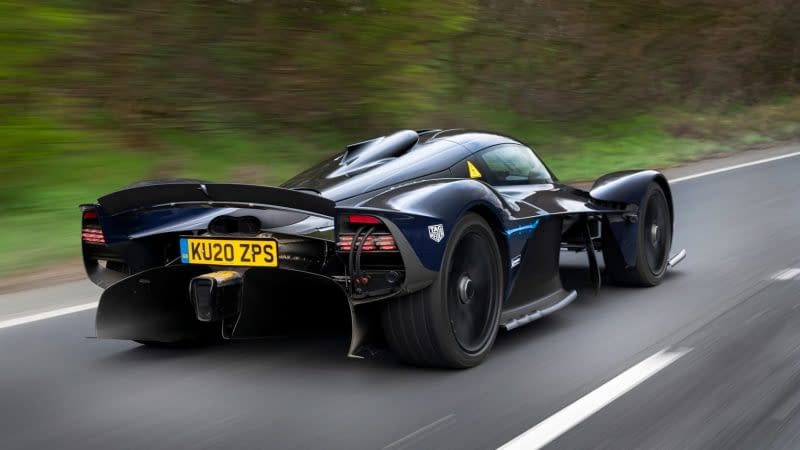 While downforce has always been the core design deliverable, the team also had the challenge of finishing the Valkyrie with the sort of details befitting an Aston Martin car of this price tag. One example is the front badge. Deemed too heavy when made from the traditional enamel, Aston Martin has instead designed a chemical-etched aluminium badge just 70 microns thick. At about 30 per cent thinner than a human hair, the badge is then covered in a thin layer of clear lacquer to protect against the elements.

The headlights are also very specialised and are 30 to 40 per cent lighter than other units available to Aston Martin. The team stripped back the components found inside a normal headlight, directly mounting the essential elements to a single aluminium frame and removing all the shrouding one would usually see in a headlight unit.

Aston Martin’s creative director of exterior design, Miles Nurnberger, has said: “I would say we’re around 95 per cent of the way there with the exterior design. Much of what you see is actually the structure of the car, so this had to be signed off relatively early in the project. The remaining areas of non-structural bodywork are still subject to evolution and change as Adrian [Newey] continues to explore ways of finding more downforce.”

The Valkyrie interior was perhaps the biggest challenge, though, as designers had to work within the strict packaging allowances dictated by the carbonfibre tub. Like Ferrari did in its LaFerrari, Aston Martin has mounted the seats directly to the tub to save space, while all the controls have been placed on an F1-inspired steering wheel.

The Valkyrie also continues Aston Martin’s tradition of names beginning with V – such as Vanquish, Volante and Vantage. Reichman said: “Aston Martin model names have deep meaning. They need to inspire and excite. The Aston Martin Valkyrie is an incredibly special car that demands an equally remarkable name; an uncompromising car that leaves nothing in reserve. The connotations of power and honour, of being chosen by the Gods, are so evocative, and so pertinent to a car that only a fortunate few will ever experience.” 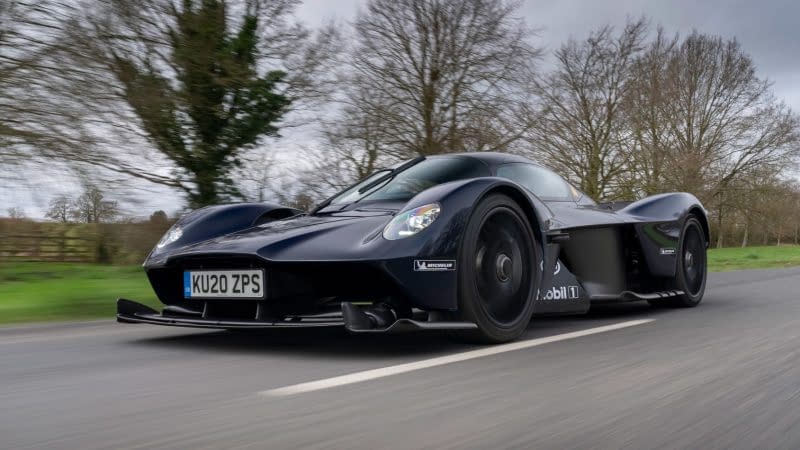 Aston Martin has drafted in Cosworth to help develop the hybrid powertrain. The British outfit has been tasked with building the engine and admitted that the Valkyrie will feature the most powerful naturally aspirated road car engine yet, with 745kW. Sourced from a 6.5-litre V12 augmented by a ‘lightweight hybrid battery system’, the electric element
is expected to be configured in a KERS-style boost system akin to those equipped in
Formula 1 cars.

The brand has recently revealed that the engine will be capable of producing its peak 745kW output at 10,500rpm, 740Nm at 7000rpm and will hit redline at a rather ridiculous 11,100rpm. Aston Martin says that the majority of the engine’s internal components are machined from solid material, including F1-spec pistons, making for an exceedingly light engine at just 206kg – Cosworth’s 3.0 litre V10 F1TM engines weighed 97kg, if scaled-up to 6.5 litres they would weigh more, at 210kg. As if 745kW wasn’t enough, performance figures will be further boosted by a battery hybrid system, something that Andy Palmer speculated would add around 97kW to that figure.

One of the many deliverables with the Valkyrie is a 0.75kW per kg power-to-weight ratio, meaning that we expect a weight of around 1130kg if Aston Martin and Red Bull hit their target.

Aston Martin hasn’t been shy in its search for project partners. Ricardo is engineering a bespoke seven-speed paddleshift gearbox, while Rimac is developing the hybrid battery system. Construction of the carbonfibre Monocell will be taken care of by Multimatic, Alcon and Surface Transforms will supply the brakes, Bosch will deliver the ECU, traction control and ESC systems and Wipac is handling the full LED head and tail lights.

Adrian Newey says of the technical partners supporting the AM-RB 001 project: “Much like Formula 1, designing, engineering and building a car like the AM-RB 001 is a massive team effort. To achieve great things you need to surround yourself with the best people.

“Experience, creativity, energy, diligence and perfectionism are absolute must-have qualities in every area of the project. Having great technical partners such as those working with us is both reassuring and motivating. Together we aim to produce an innovative piece of engineering art.” 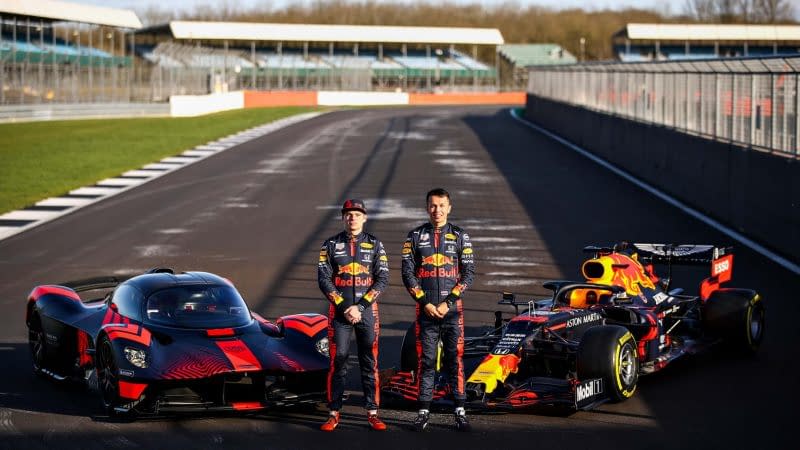 A car sure to be among the most extreme ever made available for the road needs tyres to suit, and at the Geneva motor show Michelin was confirmed as the official tyre partner for Aston’s hypercar.

Surprisingly, the tyres chosen for the Valkyrie aren’t some entirely new type designed to Adrian Newey’s exacting requirements, but a set of Michelin Pilot Sport Cup 2s – a tyre we’re more than familiar with from dozens of other sports and performance cars.

There’s a good reason for that, of course: there’s currently no better tyre for high-performance road and track work, but the Valkyrie is sure to put the Cup 2s to their greatest test yet. Up front, 265/35 R20 rubber will be used, and 325/30 R21 at the rear – a staggered set-up common to mid-engined supercars – and Aston Martin has kept unsprung weight to a minimum by wrapping the rubber around 20×9.5-inch and 21×11.5-inch magnesium centre-lock wheels. 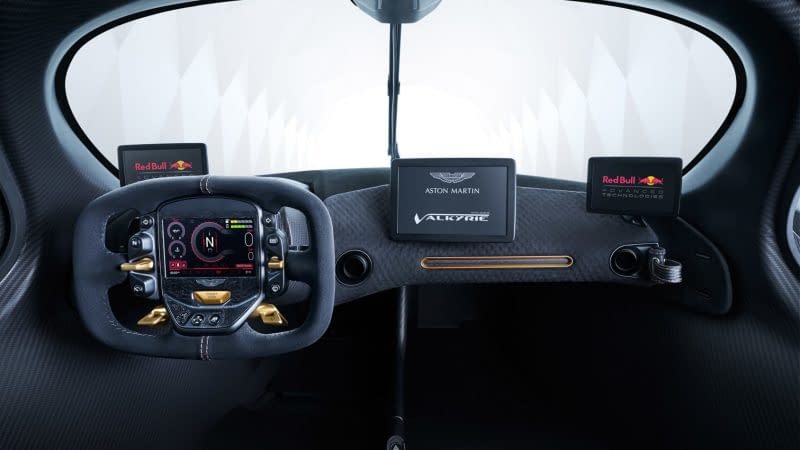 Aston Martin Valkyrie: what is it?

The result of a collaboration between Aston Martin and Red Bull Advanced Technologies involving lots of very talented people. However, it will forever be known as ‘Adrian Newey’s road car’.

That’s no slight on anyone else involved, more a mark of the significance of the most successful F1 designer of all time finally diverting his vast brainpower to a car that people – very rich people, admittedly – can actually buy.

We imagined it would be covered in those intricate aero tricks, flips and slits that give you a migraine if you stare at them for long enough on an F1 or LMP1 car. But no. The Aston Martin Valkyrie looks so pure and simple. It’s beautiful.

It’s a two-seater supercar but the occupants will sit with their feet above their hip point – just like an F1 or LMP car. It’s made from carbonfibre, the composition and thickness of which (it varies depending on strength requirements) is defined by Newey and Red Bull Advanced Technologies.

The huge power output will come from a high-revving, normally aspirated V12 with KERS, that’s completely bespoke and shares nothing with the current Aston Martin V12 we know from the likes of the Vanquish. Nor is it related to the One-77 or Vulcan engines.

Suspension is inboard, pushrod operated and said to be incredibly sophisticated. Expect an active suspension system, although Red Bull Advanced Technologies and Aston Martin remain very tight-lipped about the exact make-up of the system.

Freed from the constraints of racing regulations Newey has devised a car that looks set to instantly make cars like LaFerrari, P1 and 918 Spyder seem archaic, heavy and, unbelievably, rather slow. It has downforce levels similar to an LMP1 car, and will achieve 4.5 G of lateral force (on slicks rather than the Cup 2 road tyres, we presume).