Alfa Romeo’s range-topping Giulia and Stelvio Quadrifoglio models have received a series of enhancements for the 2020 model year.

Mirroring some of the changes recently made to the regular versions of the saloon and SUV, the high-performance pair benefit from technology, design and safety upgrades to bring them into line with more recently introduced rivals, such as the facelifted Mercedes-AMG C63 and the new BMW X3 M.

External tweaks are minor but include new LED rear light clusters with dark lenses and gloss black detailing. A 21in alloy wheel option has been added to the Stelvio, while FCA’s parts and accessories arm, Mopar, has designed a new carbonfibre front grille, along with carbonfibre mirror caps and a carbonfibre spoiler.

Changes are more extensive inside, with a redesigned centre console that’s claimed to have “greater tactile and visual impact” and improve storage.

The most significant addition is a new infotainment system with an 8.8in touchscreen, connected services and a new interface. The Quadrifoglio models benefit from a new Performance Pages menu that provides real-time data on power and torque usage, component temperatures and turbo boost pressure.

More tweaks include swapping the carbonfibre-style trim on the steering wheel and gear selector for leather with stitching, plus adding the option of red or green seatbelts. Perforated leather upholstery is now optional, too. 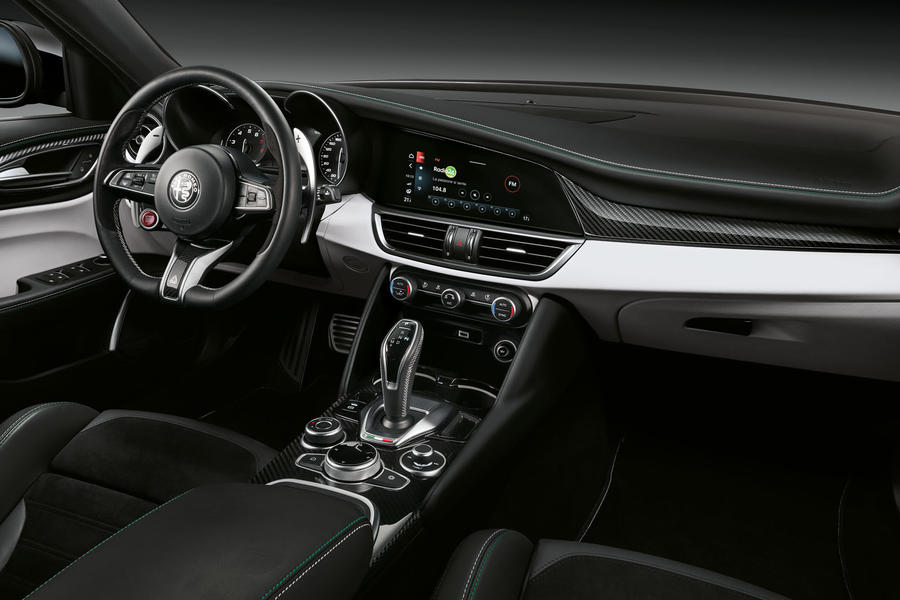 The powertrains of the cars go unchanged, with the twin-turbo 2.9-litre V6 still sending 503bhp and 443lb ft of torque to the rear axle of the Giulia and all four wheels of the Stelvio.

Alfa Romeo has added the option of a dual-mode titanium Akrapovic exhaust system with carbonfibre tailpipes, however.

Order books for the updated Giulia and Stelvio Quadrifoglio will open this summer. We expect a small price increase on account of the additions.

The updated Quadrifoglio models follow on from the recently unveiled GTA, a limited-run hardcore special which sees power rise to 397kW and a 100kg weight reduction and a host of other additions.