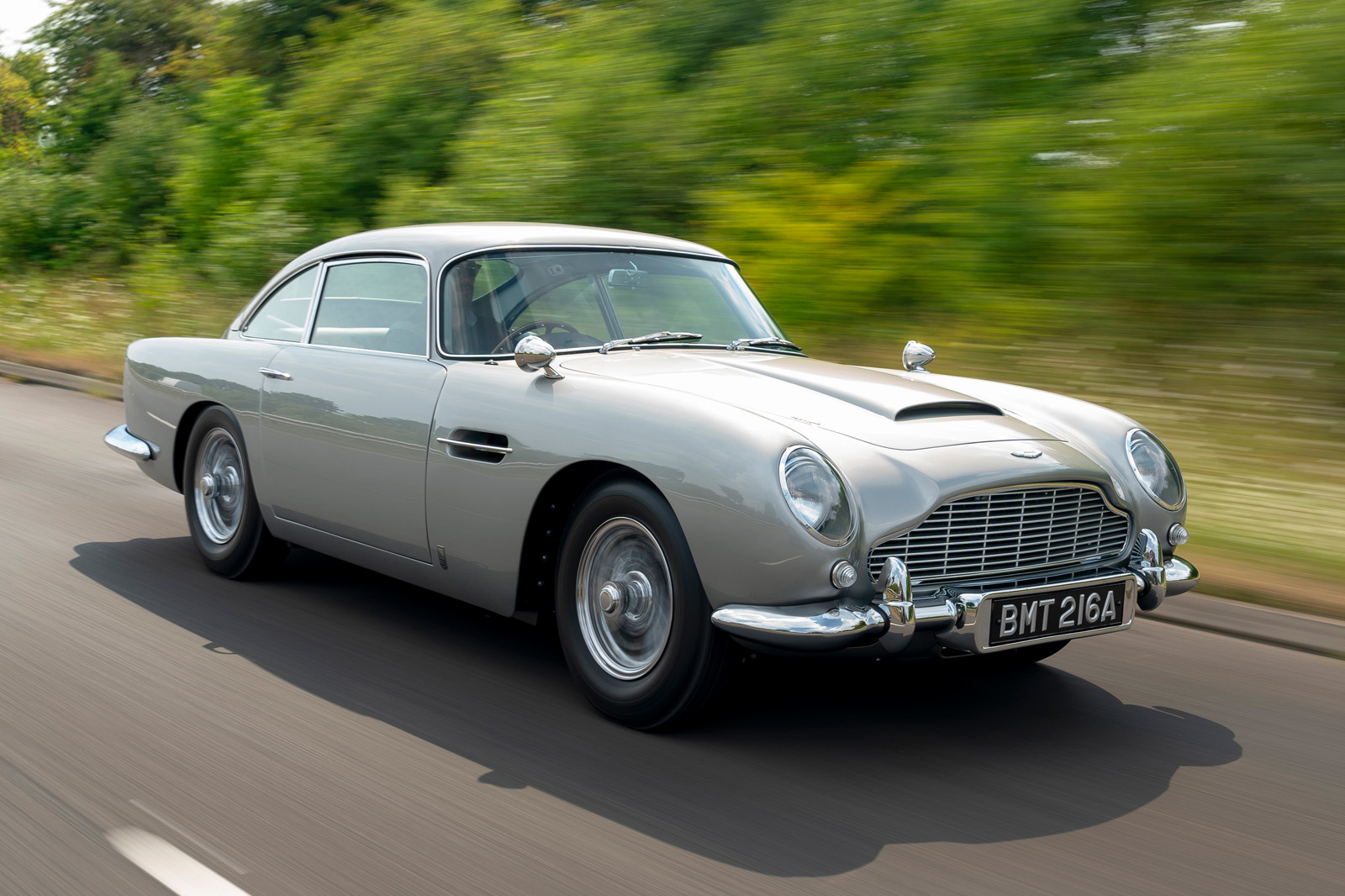 Ahead of James Bond’s return to cinemas, we delved into Automotive Daily’s exclusive partner Autocar archives and declassified a road test of 007’s most iconic car…

Our recent road test of the Aston Martin DB5 (18 September 1964) confirmed that the newly launched British grand touring sports car offers a peerless combination of style and performance. The conclusion we reached in that test was that “this is a car that cries out to be driven, to be driven well and to be driven far. It is a car requiring skill and muscle – a man’s car – which challenges and satisfies and always excites.”

We would not seek to revise that verdict in any substantial way. Yet we have recently had the opportunity to test a modified version of the DB5 – one that has been given a variety of customised options on behalf of somebody who was, we’re told, a “very demanding” client. All of these were surprising, some were positively dangerous and together they made this car an even more compelling proposition than the basic model. The provisions of the Official Secrets Act prevent us from describing the specifics of this DB5’s use, but Aston Martin insiders told us its former keeper was a keen Bentley man who was initially reluctant to embrace new technology. The excitement of the car’s earlier life was borne out by some very interesting patina. 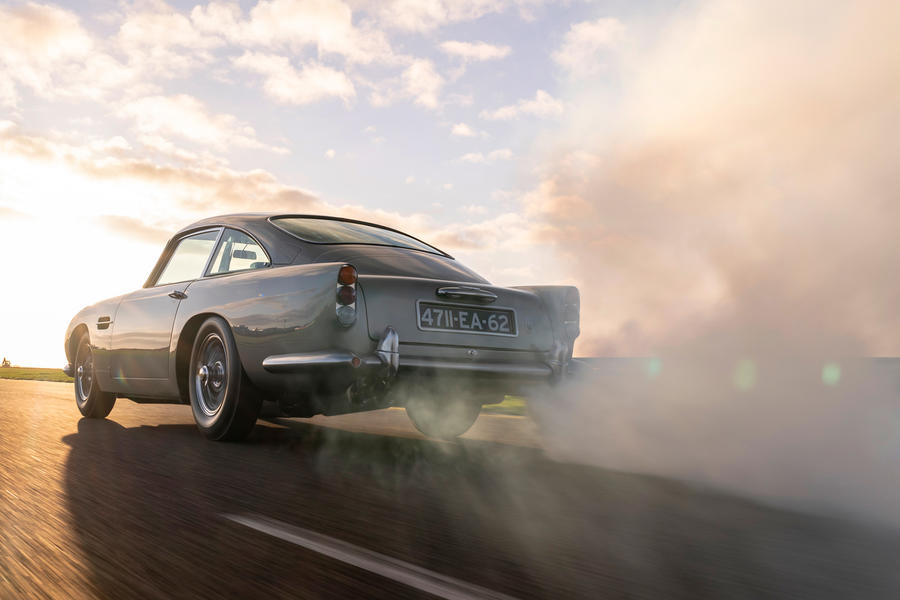 The standout modification is undoubtedly that of the twin .303-calibre machine guns that have been mounted within the front wings, electromechanical actuation deploying the barrels from behind the lenses of the indicators when they’re armed. These aren’t precision weapons; they can’t be elevated or declined and can be aimed only by steering the car. But their ability to each fire up to 650 rounds per minute more than makes up for their limited accuracy. This Aston Martin has also been given many defensive features. These include a smokescreen and a rear-mounted oil slick to discourage any pursuers, as well as a deployable bulletproof shield located behind the rear windscreen. There are also power-operated rams within the front and rear bumpers, although we suspect that, like us, this DB5’s former keeper struggled to find a use for these. The real highlight is the rotating three-sided numberplates, which allow the car to be legally taxed and registered in multiple jurisdictions at the same time. That would surely make more sense than the scurrilous suggestion that the car could display counterfeit credentials. 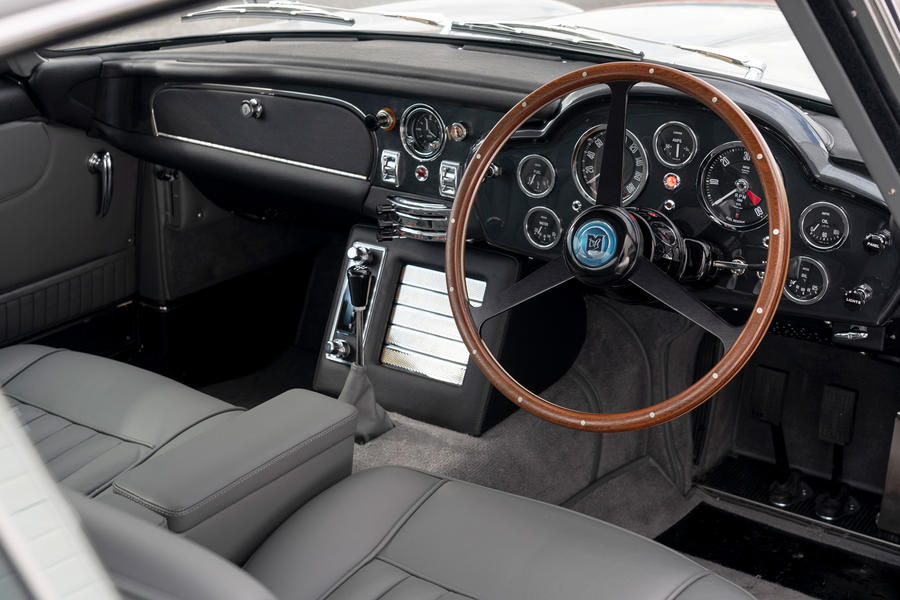 This special DB5’s interior is finished to the same sumptuous standard as that of the standard car, its specification including the pioneering fitment of what Aston Martin calls electric windows. These employ 12V motors hidden within the doors for their operation in place of traditional hand cranks, these being controlled by switches on the dashboard. We struggle to see the point of such a complex answer to an unasked question.

In addition to the futuristic power-operated glazing, a host of cutting-edge features have been added to this DB5. The centre of the dashboard contains a circular cathode-ray screen that acts as a simulated map, this capable of reporting the position of another vehicle that has been fitted with a compact tracing device. Such technology is certainly impressive and could perhaps ultimately be developed to offer inattentive drivers a visual representation of their immediate environment or even routing instructions.

The radio-telephone that has been incorporated into the pocket of the driver’s door is even more advanced to modern eyes, offering the space-age possibility of communication on the move. In addition to this, a compact console between the front seats with a pop-open lid contains the controls for most of the car’s additional features – although not, as we discovered later, quite all of them. 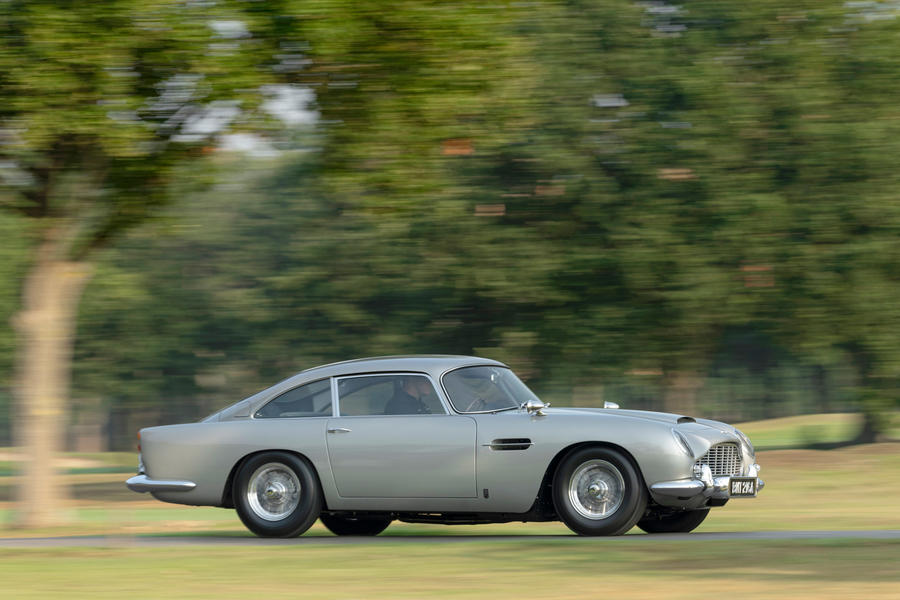 Aston Martin’s straight-six engine, fed by triple carburettors, has already proved itself to be one of the most effective high-performance powerplants in the world, giving the DB5 the ability to travel at the speeds permitted by our growing motorway network. A speed of 140mph canbe achieved and maintained in perfect safety, beyond the need to take account of the surprised and frequently sluggish reactions of those road users unable to achieve such lofty velocities.

Yet we were unable to confirm the ability of this special car to match that achievement, and we suspect that the additional mass added by the non-standard gadgetry has had an adverse effect on its straight-line performance. We’re sad to report that during testing, the car struggled to pull away from a pack of 47kW Mercedes-Benz 180 sedans. 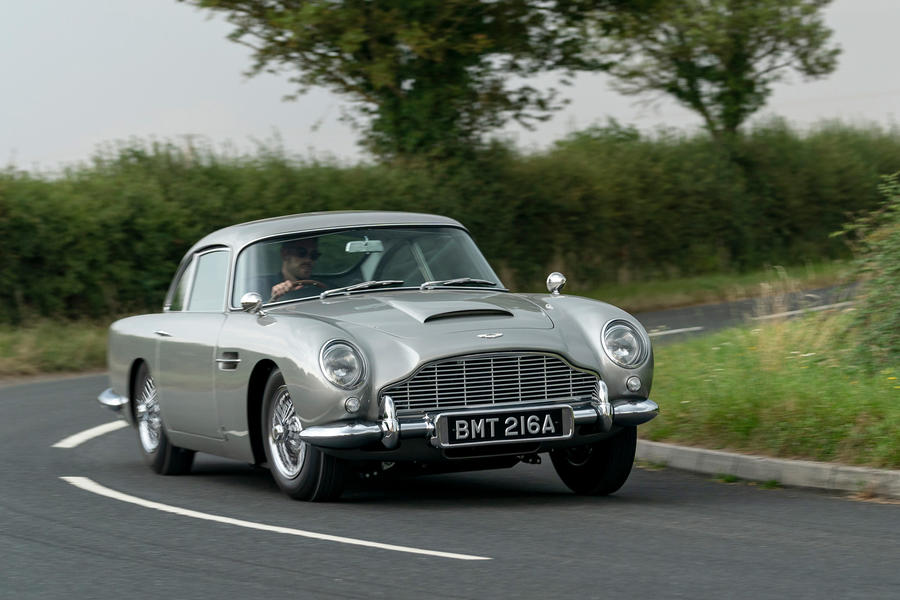 The DB5’s sure-footed roadholding was evident during our testing of the original model, helped in large part by the substantial dimensions of its Avon cross-ply tyres (their 670 width equivalent to a metric size of 185), these mounting to monstrous 15-inch wheels. This special car also features what are described as tyre-shredders: rotating blades that extend outwards from the hubs, which seem to us somewhat unsporting in the sneakiness of their lethal purpose.

This specially commissioned DB5 grips as hard and turns as keenly as its standard sister, its steering rack sharing the same sprightly ratio of four and a half turns between its lock stops and with an advanced disc-brake system on each axle providing assured retardation.

We did encounter one unpleasant surprise during performance testing, discovering that the red button integrated into the top of the gear selector is not, as we initially thought, for an additional overdrive. Curiously, it instead activates what can only be described as an ejector seat, which throws the occupant of the front passenger seat clear of the car. For what purpose we can only imagine. Fortunately, our junior road tester is expected to make a full recovery. 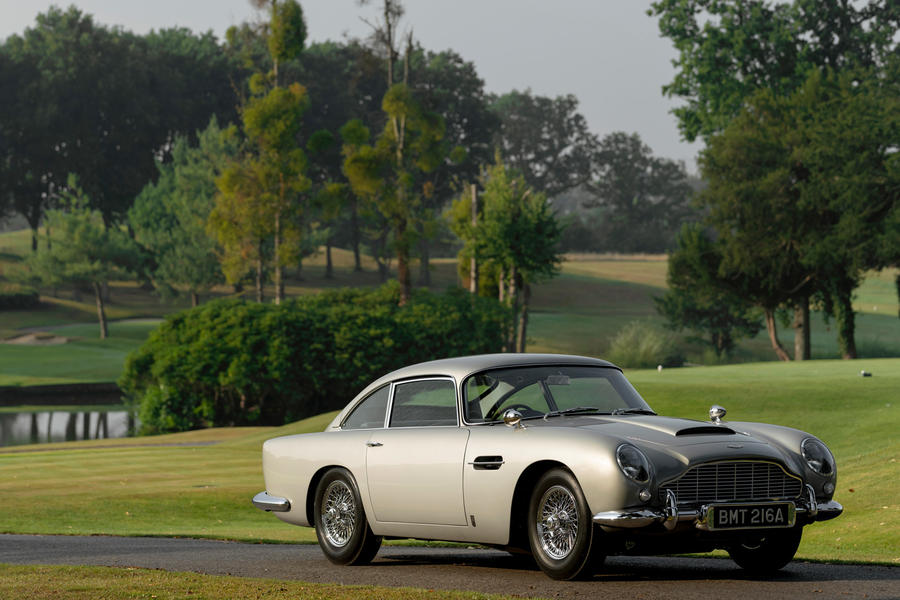 While some of the additional features of this very special DB5 might seem like childish distractions, it’s clear that the car was created to accomplish a very special mission – one attested to by discoloration from what appeared to be gold paint. Also, more confusingly, we found a trove of Slazenger No 1 golf balls.

The standard DB5 is truly special, but we suspect that future buyers will all wish their cars could feature similar enhancements to this one. Our only substantive complaint is with the car’s Fern Green paintwork; we struggle to see such a drab hue catching on.

While this car hasn’t caused us to substantially revise the conclusion we reached in our earlier DB5 road test, its impressive arsenal has given cause to amend it slightly. Because this is a man’s man’s car: one that savages, chastises and frequently bites.

While earlier Aston Martin Continuation cars were designed to be almost exact copies of the hallowed originals, the DB5 Goldfinger Continuation threw up a much greater challenge. The gadgets that made the original film car famous were theatrical props that needed to work only once; those fitted to the Continuation had to be able to operate repeatedly. They would also need to be non-lethal. Gaydon’s lawyers were apparently very insistent on that point.

There’s an almost full set of gadgets, created under the supervision of Chris Corbould, an Oscar-winning special-effects designer who has worked on no fewer than 15 James Bond films, including No Time to Die. They include machine guns, rotating numberplates, on-board radar, a bulletproof rear screen, an oil slick and a smokescreen, plus the front and rear bumper rams, which were referenced but not used in 1964’s Goldfinger film. The original film car used blank-firing guns, which were an impractical solution for the Continuation, because they would be too loud and indeed illegal in many territories. Instead, its barrels simulate fire with ultra-bright LEDs and a motorised recoil action, accompanied by a loudspeaker soundtrack that’s much more subdued than real gunfire. For similar reasons, the oil slick actually fires water and the tyre-slashers come in a display case and can’t actually be fitted to the car. And although the asymmetric sunroof aperture is present, the Continuation doesn’t feature an ejector seat. Disappointingly, pressing the red button beneath the gearlever’s folding flap doesn’t do anything; some passenger-startling under-seat vibration would have been a nice touch.

Aston provides a remote control box to allow owners to have a better view of the operation of the various gadgets. The machine guns are definitely more impressive when viewed from outside; there’s a definite frisson of excitement as the indicator lenses fold down and the barrels appear. The glycol-mix smokescreen also creates a billowing cloud that, without wind, can quickly hide the car. But the noveltyof the simulated gadgets soon fades. Like most noisy toys, you don’t want to play with it for too long at a sitting.

Which is where the greater appeal of having a factory-fresh DB5 takes over. Aston has diligently added the proviso that the Goldfinger isn’t road legal to every official announcement, but the fact the company’s demonstrator was road registered shows how easily that legislative hurdle can be cleared (in the UK, at least). 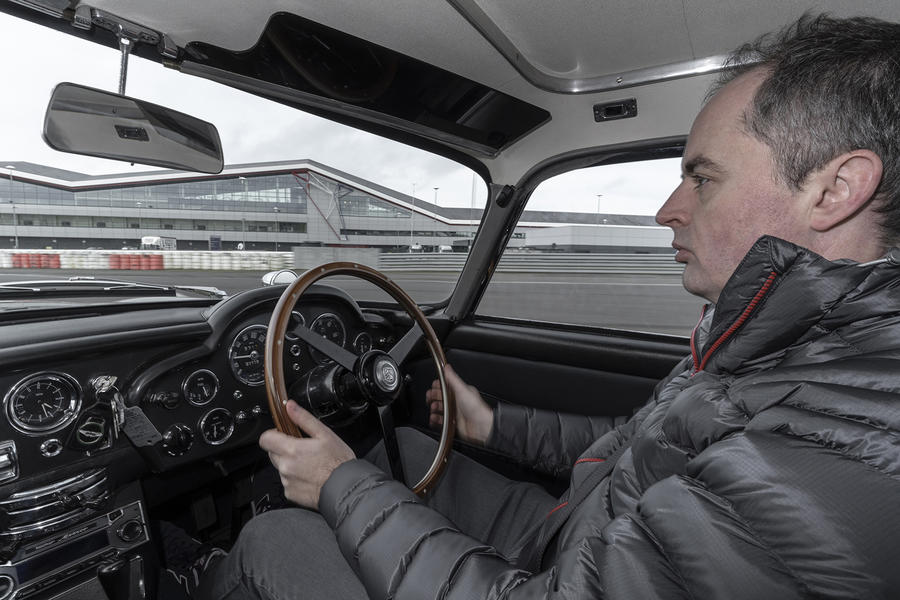 Driving the prototype through Middle England felt every bit as special as you would expect it to, although Aston had inhibited the Bond equipment for our test, which stopped us subjecting Great Missenden to a simulated shoot-up.

The world has moved on considerably since our original DB5 road test in 1964, and even a factory-fresh DB5 no longer feels particularly fast or wieldy. The Continuation has been given a slightly uprated 4.0-litre version of the original car’s straight-six engine. This makes a claimed 217kW, but the claimed torque peak of 390Nm is much more important for the DB5’s sense of relaxed muscularity.

Under gentle throttle openings, the throaty noise made by the triple SU carburettors is particularly enticing. But beyond the modern technology behind the gadgets, this isn’t a restomod, so there are no anachronistic modifications or enhancements.

Dynamically, it’s soon obvious why Aston went to the considerable trouble of creating a new stunt-spec DB5 replica for filming 007’s latest outing. The Continuation’s slow, heavy steering and the limited grip of its Avon Turbospeed cross-ply tyres give no encouragement to push harder. Nor does the suspension, which manages to feel too hard over smaller imperfections yet too soft when dealing with bigger ones. Nor, for that matter, does the car’s £3.3 million (AUD$6.16 million) price tag. Yet however preposterous the DB5 Goldfinger Continuation might seem, spending time with it triggers an almost visceral desire to possess one – and Aston says it hasn’t reached its limit of 25 cars yet. This is James Bond’s car, and it doesn’t get cooler than that.

For No Time to Die, Aston Martin went to the considerable trouble and expense of creating a DB5 lookalike for the spectacular action and chase sequences. These used steel chassis fitted with carbonfibre bodywork, and although Aston hasn’t confirmed the engine’s origins, they clearly had E46 BMW M3 straight sixes when we visited the set in Italy in 2019. With 255kW and weighing around 1250kg, they had around twice the power-to-weight ratio of the original DB5. Much of the stunt driving was done by former rally star Mark Higgins. While the body doubles were used for the action, most of the close-ups were of original DB5s. See if you can spot the difference.