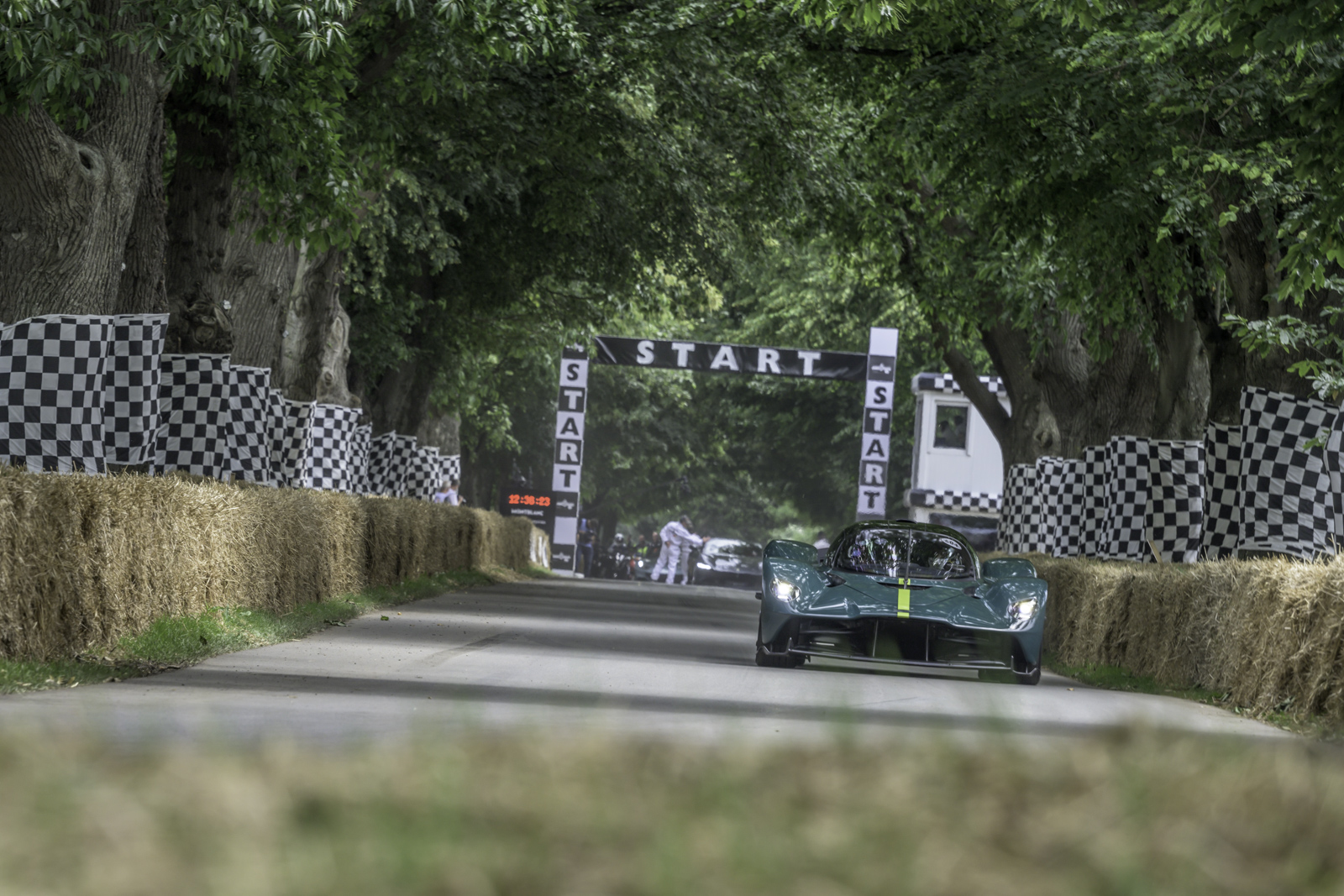 Aston Martin’s hypercar flagship, the Valkyrie, has taken to the Goodwood Festival of Speed hill climb in near-production guise  ahead of the start of customer deliveries.

The 865kW mid-engined model drove its first miles on public roads late last year, around the brand’s Silverstone engineering base. It was driven by Aston test driver Chris Goodwin and will also be driven by a team of engineers, including those from Red Bull Advanced Technologies, who were integral in the Valkyrie’s development. First deliveries are now tipped for the latter half of 2021 – later than initially thought.

The Czinger 21C rival has already been put through its paces countless times on track, and earlier this year, a video was released of Red Bull Racing F1 drivers Alex Albon and Max Verstappen giving it the once over behind the wheel (below).

Despite its track focus, road testing is vital to ensure the car is suitable for Valkyrie owners intending to use their cars in everyday situations. The teams must ensure necessary levels of comfort and refinement are met, along with traits such as drivetrain smoothness in slow-speed traffic.

The 865kW hypercar was first heard under full throttle in a video posted by boss Andy Palmer prior to the above one.

The hybrid machine is powered by a Cosworth-developed 6.5-litre V12 that produces 745kW and 740Nm and can rev to 10,500rpm, along with an electric motor developed by Rimac and Integral Powertrain that produces 120kW and 280Nm

The short clip, below, shows the Valkyrie passing the Silverstone start/finish line under power. It sounds as if it ventures near the engine’s bike-like redline:

Last year, Autocar visited Cosworth’s base in Northampton during durability testing for the petrol engine, touted as the ultimate 12-cylinder motor. We got a chance to see it perform on a dynometer, which was simulating repeated laps of the Silverstone circuit.

Cosworth has designed the engine and will build the 150 units that will be fitted to road-going Valkyries, plus around 25 track-only AMR Pro versions.

Cosworth managing director Bruce Wood confirmed the 750kW target was agreed well before the first prototype was built, and that the V12 is set to serve as a structural component. As in a race car, it will be bolted directly to the Valkyrie’s tub and have the gearbox and rear suspension hung from it. The drive gears for the camshafts are located at the rear, in an effort to insulate the cabin from some of the noise they make at high revs.

The engine also uses port fuel injection rather than direct injection, allowing it to meet emissions standards without the need to use heavy gasoline particulate filters (GPFs). Wood says the fully dressed engine weighs just 204kg, but he is equally proud of the fact that it has been designed for a 100,000km lifespan based on no more than routine maintenance.

The electric motor sits between the engine and a single-clutch automated gearbox designed by Ricardo, with a Formula 1-inspired energy recovery system harvesting kinetic energy under braking to recharge the battery pack. The Valkyrie’s combined power figure of 865kW puts it well in excess of the 740kW minimum that Mercedes-AMG claims for the Project One hypercar, as well as the less hardcore McLaren Senna. McLaren’s Speedtail three-seater is  a near match for the Valkyrie’s power output, at 787kW, although that car won’t chase track performance but is pitched instead as an ‘all-rounder’ hypercar.

Up to 1816kg of downforce is mooted by Aston sources to be generated at top speed, helping it to “lap Silverstone as fast as an F1 car”, according to Palmer. The road-going Valkyrie, which has been co-developed by Red Bull Advanced Technologies, will cost between AUD$3.7 million and $5.7 million. The more hardcore Valkyrie AMR Pro arrives later in 2020.

Previously referred to by its internal codename AM-RB 001, the V12 model will be built on a carbonfibre chassis provided by long-standing Aston partner Multimatic. The car’s kerb weight is expected to be around one tonne, which Aston backs up with claims for a 1:1 power-to-weight ratio.

Braking will be handled by Alcon and Surface Transforms calipers and carbon-ceramic discs, while Bosch will supply the engine control unit, traction control unit and electronic stability control systems. The tyres are Michelin Pilot Sport Cup 2s wrapped around 20in and 21-inch wheels. Wipac, a British LED lighting manufacturer, has developed the car’s headlights and tail-lights. Red Bull Racing chief technical officer Adrian Newey said of the partners: “Much like in Formula 1, designing, engineering and building a car like the Valkyrie is a massive team effort. To achieve great things, you need to surround yourself with the best people.

“Experience, creativity, energy, diligence and perfectionism are absolute must-have qualities in every area of the project. Having great technical partners such as those working with us is both reassuring and motivating. Together, we aim to produce an innovative piece of engineering art.”

Aston vice-president David King said: “Making the Valkyrie presents huge challenges. It’s a real test of everyone involved, but that’s as it should be, because we’re genuinely raising the bar with this car. That’s what makes the project so special and why having the right technical partners is so critical.

“Some of those names we’re working with are long-standing suppliers of Aston Martin, but there are some new names in there, too. Whether forging fresh partnerships or building on existing relationships, this project is a shared engineering adventure that we’re all relishing.”

The Valkyrie name stems from Norse mythology and translates to ‘chooser of the slain’. Aston chose the name to signify the car’s role as its most potent product yet.

Chief creative officer Marek Reichman said: “The Valkyrie is an incredibly special car that demands an equally remarkable name – an uncompromising car that leaves nothing in reserve. The connotations of power and honour, of being chosen by the Gods, are so evocative and so pertinent to a car that only a fortunate few will ever experience.” Why natural aspiration? Wouldn’t a turbo engine be lighter?

“We had that debate, but our view – and Adrian Newey’s view – was that if your sole objective is the driving experience, you can’t beat a naturally aspirated V12. There are some great turbo applications these days, but there is inevitably a fraction of lag, a diminution of the noise. Cooling is another challenge; look at the frontal area of the Valkyrie and tell me where we would put all the intercoolers!”

The Mercedes Project One is being developed just down the road; do you feel a rivalry?

“The market for extraordinary vehicles is expanding and being in “motorsport valley” means many of us were poised to do it. I think that the Valkyrie is a very personal expression of Adrian Newey’s vision of a car, whereas I’d say the Project One – which I’m sure will be a magnificent vehicle – is less an individual’s view and more corporate.”