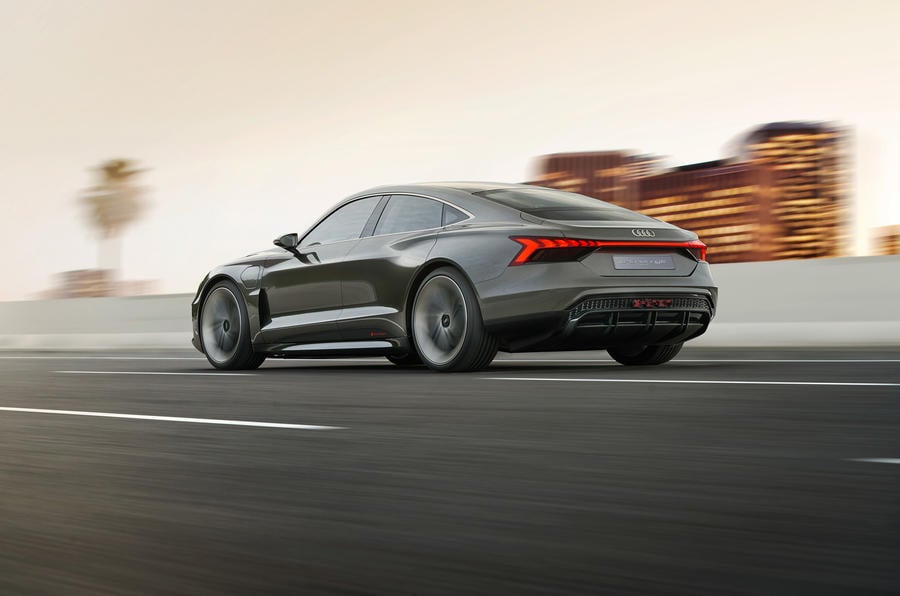 Everything you need to know about the upcoming Audi E-Tron GT, including the hot RS model.

Audi’s all-new Tesla Model S rival, the e-tron GT, will be officially revealed at the beginning of next year. Prototypes have been spotted undergoing development testing at the Nurburgring and we’ve already driven it – read our full prototype review here. The fully electric saloon has been described by the company’s boss Markus Duesmann as “the most important vehicle for Audi, it is our halo car.” The e-tron GT will be built at Audi’s Böllinger Höfe facility in Neckarsulm, the same factory where the Audi R8 supercar is currently produced.

Audi has also confirmed development of a flagship RS version, which will be badged RS e-tron GT. The model will go on sale alongside the regular version in the middle of next year, but feature a unique look and chassis tuning as well as greater levels of performance.

The finished product is expected to look almost identical to the concept from the 2018 Los Angeles Motor Show, with only a handful of tweaks to help it meet current safety regulations. The front grille looks a little narrower than the concept’s, while its touch sensitive doors will be replaced by conventional handles. The show car’s centre locking wheels will also be ditched, but Audi has confirmed that the finished car will feature 22-inch alloys.

This latest mule also shows the car’s retractable rear spoiler in its raised position – but this can be retracted to reduce drag when driving on the motorway. The active wing will work alongside a sleek underbody aero, which will be more efficient than any of Audi’s combustion cars due to the lack of an exhaust system. The production e-tron GT will be based on the same platform as the Porsche Taycan, with the pair sharing around 60 per cent of componentry. However, the e-tron GT will use a triple electric motor setup, whereas the Taycan only uses two.

Sending drive to all four wheels, Audi expects the e-tron GT to accelerate from 0–100km/h in around 3.5 seconds. A unique software configuration – along with Porsche’s fastidious approach to reliability – will also allow it to achieve such figures repeatedly, even when the battery isn’t fully charged.

A 96kWh battery pack should also be available in the e-tron GT, meaning the saloon will have a range of upwards of 400km and be able to achieve an 80 per cent charge in 20 minutes, when plugged into a DC rapid-charger.

An advanced torque vectoring system will allow Audi to control the e-tron GT’s bulk. Despite a kerb weight of around two tonnes, the EV’s low centre of gravity should ensure a handling balance akin to that of the Taycan.

This will be helped along by the location of battery pack and Audi’s decision to use carbon fibre for the e-tron GT’s roof and aluminium for its doors – keeping the weightier components lower in the car’s chassis and reducing the top-heavy pendulum effect that would have been created if the entire car was made from steel. Speaking about the e-tron GT concept at the 2018 LA Show, Marc Lichte, head of Audi design, was very excited to be involved with the project. “It’s a dream to design a car like this,” Lichte told us. “This is truly a design where the sketch becomes a reality.”

The electric design presents additional challenges, too. As Lichte explains: “Other noises like road and wind noise become much more obvious without an engine. For example, we’ve designed the side mirrors to channel the air along the door skins instead of the window glass, so wind noise is less.”

Like the outside, much of the concept’s interior design is likely to be carried over to the production e-tron GT. That includes a centre span of the dashboard that flows into the doors to emphasise the cabin’s width. Whether the concept’s fully vegan materials will be used is less likely.