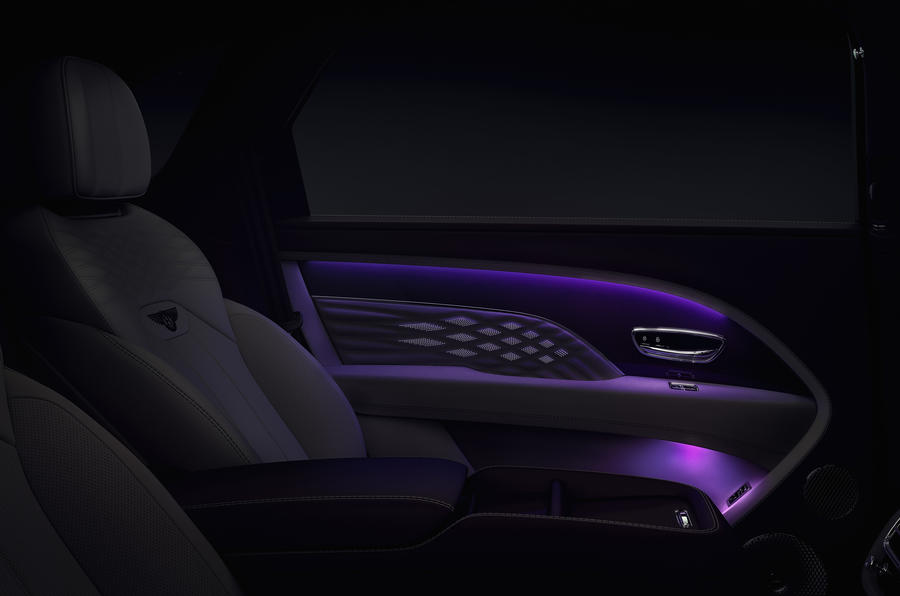 The fifth car in Bentley’s line-up will be revealed on 10 May and is tipped to be new extended-wheelbase Bentayga.

Bentley has released an image showing the spacious interior of its upcoming new model, widely tipped to be an extended-wheelbase version of its Bentayga SUV.

It follows a short video, revealed by Bentley last week, that references a “long-awaited” new model that will add “an extra dimension of on-board wellness”. The video shows the inside of a rear door, seemingly longer than that fitted to the current Bentayga, illuminated in a dramatic shade of purple.

The model, to be revealed on 10 May, would become the fifth in the Bentley Bentayga line-up, joining the standard V8 car, the V6 plug-in hybrid, the firmed-up Bentayga S and the range-topping Speed.

Such a model would command a healthy premium over the standard Bentayga. Although the model is unconfirmed, Bentley said: “With an extra dimension of on-board wellness, the new model will sit in sumptuous comfort at the pinnacle of its range, and deliver a breadth of capabilities – and configurations – beyond anything previously offered.”

It added that 24 billion possible configurations will be possible. It is not known if this will be available across the Bentley range.

As well as this, the new model will include the option to fit the Bentley Airline Seat. The Crewe-based car maker claims this will be the “most advanced seat ever fitted to a car”, down to the 22-way adjustment it offers, along with other postural features.

An extended version of the Bentayga has been on the cards since 2016, when company bosses said that the model’s sales success had prompted internal discussion about various new derivatives.

Mooted were a coupé version, a limited-edition high-performance model (which we now know as the W12-engined Bentayga Speed) and a long-wheelbase version, which has been testing in camouflage on public roads since 2020.

The Bentayga, introduced in 2016, has quickly become the brand’s top-selling model, accounting for 37 per cent of sales.

While Bentley is exploiting the success of its Bentayga model by launching a number of derivatives, it is also readying for a new era of electrification. It plans to release five electric cars from 2025 as part of its Beyond100 plan to become an electric-only carbon-neutral brand by 2030.