BMW’s hydrogen-powered X5 prototype will be used for customer trials before technology is carried over to series-production models.

BMW has revealed the road-ready iX5 Hydrogen at the Munich motor show, a model that paves the way for a more widespread introduction of the technology by the end of the decade.

The iX5 Hydrogen will not be offered for conventional sale but users will instead be taking part in a live trial to study how the technology is used, similar to what BMW did a decade ago with the original Mini E and its early study of electric cars before launching the i brand.

Juergen Guldner, BMW’s hydrogen boss, said the firm was “convinced a second energy carrier will be needed in the future”, and hydrogen was that technology. It is not in competition with battery electric vehicles, said Guldner, but instead is a complementary technology better suited to larger, heavier vehicles and people who travel long distances and those who can’t easily charge. 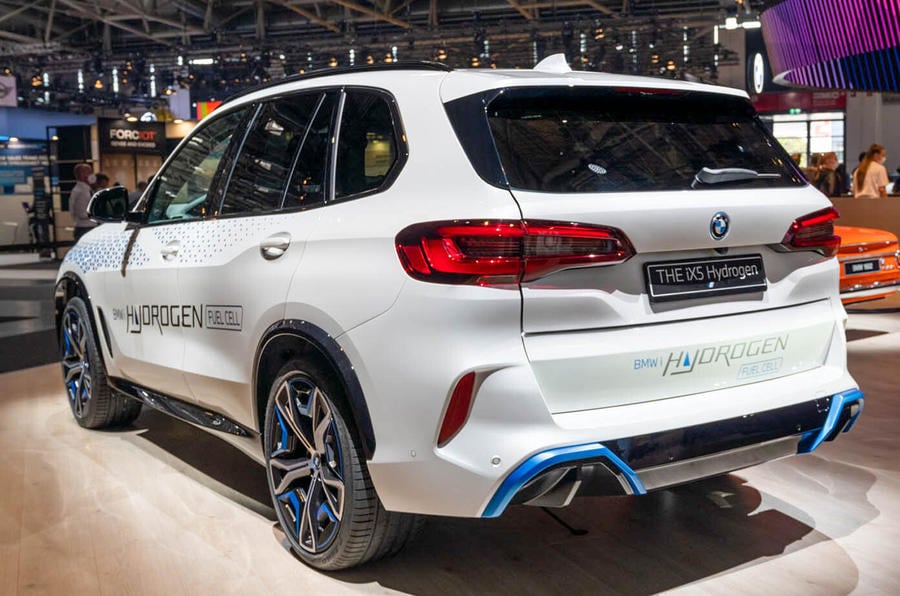 The iX5 Hydrogen is fitted with the most powerful fuel cell stack yet seen in a passenger car, at 125kW, using cell technology that has been developed in conjunction with Toyota but given a bespoke integration into the X5. This is fuelled by two hydrogen tanks, one where the transmission tunnel would be and one below the rear seats. These hold 6kg of hydrogen at a pressure of 700 bar.

The fuel stack then powers a 275kW electric motor and 150kW battery booster on the rear axle, and the range is put at 500km, which BMW believes is more than adequate given fast hydrogen refuelling times. The car weighs the same as an X5 plug-in hybrid, at around 2500kg.

There are a few exterior and interior trim and detail changes to mark the iX5 Hydrogen out from the X5 on which it is based, including a design theme and trim package inspired by BMW’s other i models. New 22-inch alloys are also offered, wrapped in tyres made from sustainable rubber.

While the iX5 Hydrogen will not be offered for sale, its successor will. Guldner confirmed that BMW is working on electric car architectures that would also work for hydrogen models, by designing slimmer tanks that fit in where the battery pack sit in the floor.

“This will give us the flexibility we need for the future,” said Guldner. “That will come by the second half of the decade. That is the key to taking the technology further, and it will allow us to do that.”

By that time, fuel cell stacks themselves will be smaller and more efficient; and developments in the heavy truck industry – where the adoption of hydrogen is now gathering pace and somewhat of an inevitability as it meets its own aggressive zero-emissions targets – will benefit the car industry and its hydrogen rollout plans, due to high levels of commonality between fuel cell stacks.

BMW is committed to ensuring that green hydrogen is adopted to power its fuel cells and believes that the full cradle-to-grave emissions of an FCEV car match those of a BEV car. Hyundai has also announced its future plans which involve new hydrogen models coming in the next 15 years.