It’s finally here. The BMW M3 Touring was beginning to feel like the most teased performance car of the last decade, but at long last it’s been revealed in all its glory, and not a camo wrap in sight. Now we have seen it in the metal on stage, the two versions finished in matt black and metallic purple paint, with matt gold and black alloy wheels respectively.

The pent-up demand for an M3 with a bigger boot was tangible, even before all the drip-fed details. BMW has dabbled with such prototypes in the past, chiefly an E30 that never saw the light of day and an E46 that’s occasionally wheeled out for M3 anniversary celebrations, but only to taunt us with its muscular ‘here’s what you could have won’ vibe. But this is the first time M has given the idea serious thought since. The big news is the Touring is all-wheel-drive only – it launches in Competition xDrive spec and won’t be offered with less power or fewer driven axles. Which means M’s latest twin-turbo straight-six producing 375kW and 650Nm in a car that’s good for 0-100km/h in under four seconds.

“It’s the best kind of powertrain solution for the countries we will offer this car,” says M Division’s head of development, Dirk Häcker. The model has been confirmed for Australia and will arrive next year. There are no major mechanical changes over an xDrive-equipped sedan, though there are fresh rear dampers which also – oddly enough – appear in the all-new M2. “If they were to sit in the front and not look behind, I think most drivers wouldn’t feel whether it’s a Touring or a saloon. That’s what was really important to us,” says Dirk. “We have changed the springs, the dampers and the setup for the damper control software,” he adds, before confirming the sole aim has been to replicate the four-door’s handling experience rather than offer something new. Weight distribution remains close to 50:50 and while an overall figure is conspicuous by its absence at the moment, the typical leap from saloon to Touring elsewhere in the 3-Series range is around 70 kilos. Before you’ve loaded up the boot, of course.

The tyres and brakes remain the same, as do the M3’s staggered 19-inch front/20-inch rear forged wheels. The development programme has been exhaustive, visiting BMW’s Miramas facility in the south of France as well as winter testing centre in Arjeplog and – to no one’s surprise – the Nürburgring, where the car has already claimed ‘quickest estate’ honours with a 7: 35.060s lap time, just a few seconds behind a regular M3. The top speed is 250km/h as standard but rises to 280km/h with an optional M Driver’s Package, while you can also spec a track pack that brings carbon ceramic brakes and M’s opinion-splitting carbon bucket seats. 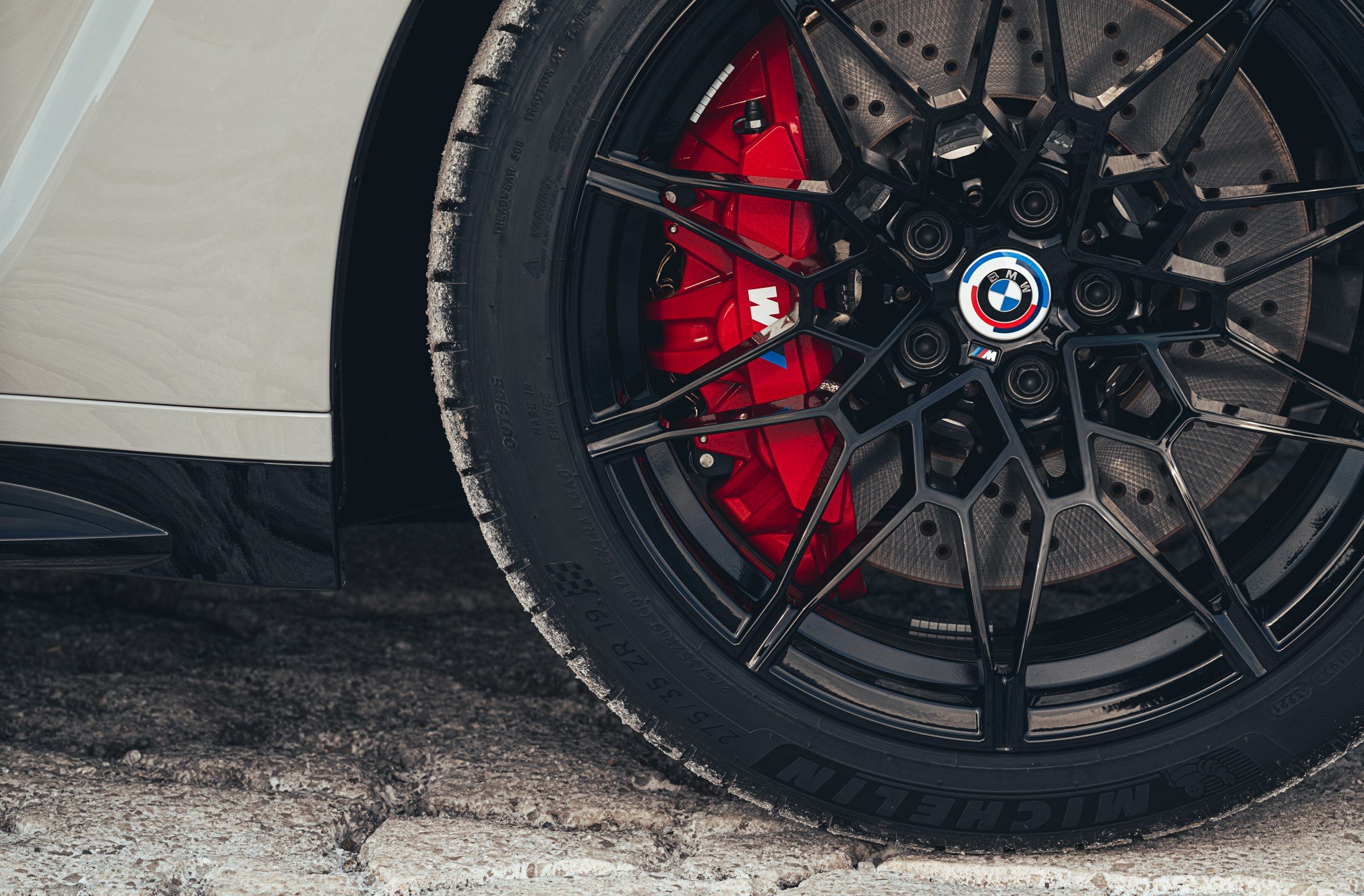 Moving towards the back of the car and everything is just like you’ll find in an especially well-trimmed 3-Series Touring – there are no sporting buckets for those perched in the rear, a la M5 CS. Well, at least not for this Competition version. The seats split 40:20:40 for maximum versatility while the stock estate’s 500 litres of boot space (1510 with all the seats folded) remains intact. As does – very pleasingly – the car’s somewhat iconic independently opening tailgate window.

Worried it’s all getting a bit too sensible? The car’s commodious back end is clothed in some properly punchy bodywork. It’s not only wider than a regular Three – broader tracks mean the arches have had to swell considerably to host the wheels – but wider than any M-badged Touring before it, those old M5s not calling for such bespoke bodywork. There’s also extended side skirts and front and rear aprons as well as that aggressive rear diffuser housing twice as many tailpipes as stock (each one being 100mm in diameter). Rest assured that if anyone opts to chisel the badges from theirs, you’ll still be able to spot the difference. 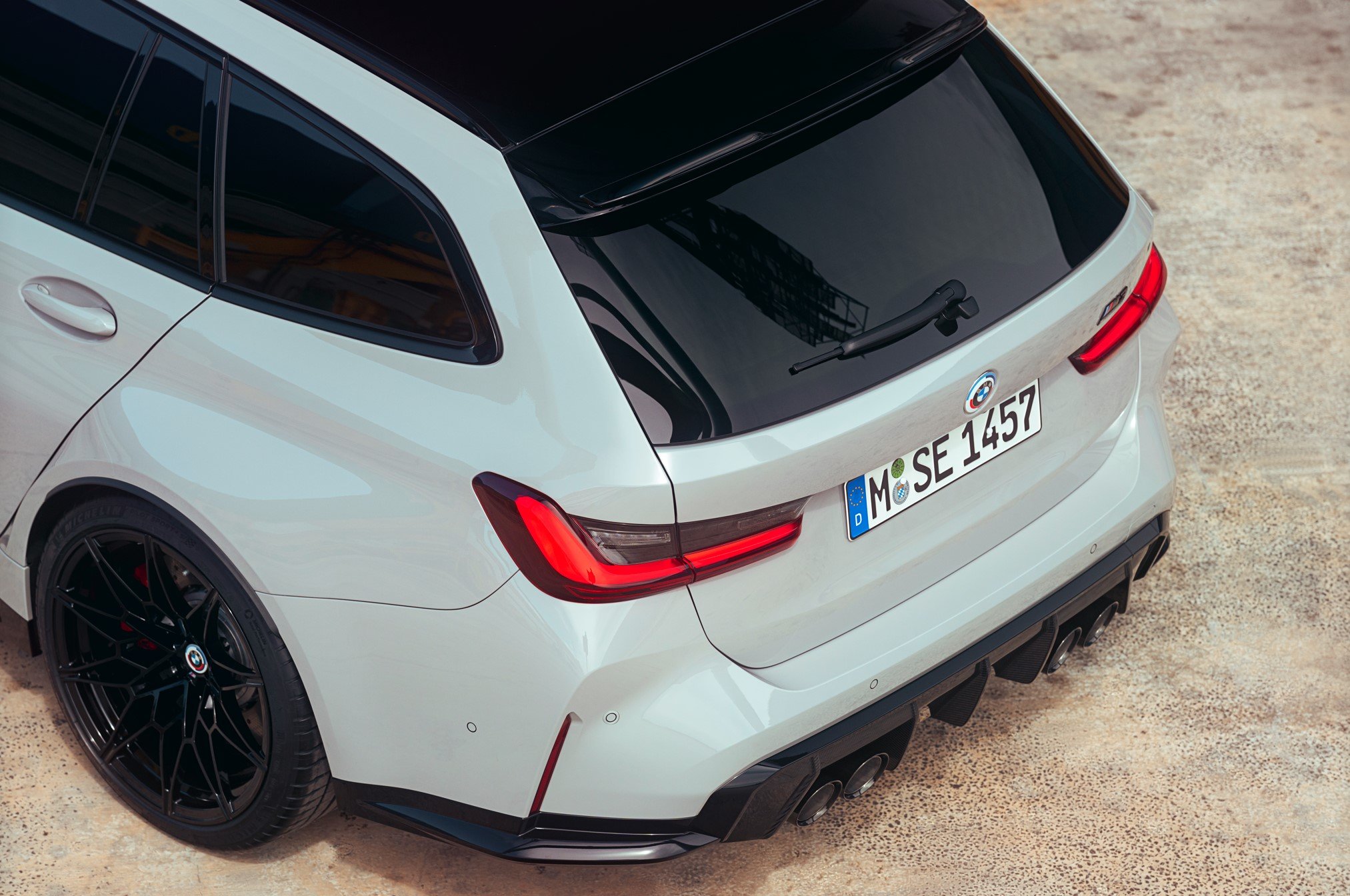 All told, it’s 76mm wider than a standard 3-Series as well as 85mm longer and 4mm lower. The M3’s trademark carbon roof isn’t available – not even as an option – with your options here between gloss black or body colour, the Touring’s exterior paint choices shared with the four-door. An optional carbon pack treats the mirrors and front air intakes to some CFRP, though. At a guess, we’re looking at roughly 1850 kilos of M3 here, but if the engineers behind the latest M2 are to be believed, weight is no longer something M Division loses any sleep over.

It’s naturally packed with tech inside too, not least because it arrives at the same time as the regular 3-Series’ mid-life facelift and therefore the M3’s ‘LCI’ update. With, which some inevitability, means more screens and fewer buttons. Two displays – the 12.3-inch digital dials and the 14.9-inch media touchscreen – combine to make one large, curved glass setup that’s angled towards the driver. And yes, the iDrive system will still point you towards the infamous M Drift Analyser software… “You waited a long time for a Touring and now you have it!” laughs Dirk. “We have a planned volume for this car and I think we will over-fulfil it. The demand on cars and luxury goods has increased rather than decreased in recent years because perhaps it’s the last chance for people to buy something like this.” The message is clear. If you’ve been patiently waiting all this time for BMW to make an M3 Touring, you’d better snap one up while you have the chance.