Conversion therapy: Should you electrify your classic car? Is it sacrilege to convert a Volkswagen Camper or Golf GTI to battery power, or is it a timely way of injecting fresh life into a much-loved classic? We take a closer look

I might have imagined it, but I’m sure that Kit Lacey has been eyeing up the Baby Shark. Not because he wants to buy it or covets the sheer wonderfulness of my E21 BMW. Nope, it’s because it has a state-of-the-art (in 1979) three-speed automatic gearbox, which will mate up to an electric motor and inverter and could easily house a battery pack under the cloth rear seats.

It’s all going to be fine, though, as Lacey shows me the 3D details of the unique Golf subframe on his phone. “Fabrication is the most difficult part,” he tells me. “But it’s absolutely crucial in getting the installation to work. Until we can engineer the position of the motor using the existing hard points of the bodywork, it isn’t going to work. Once the motor is in, we then install the driveshafts, batteries and all the other ancillaries.” 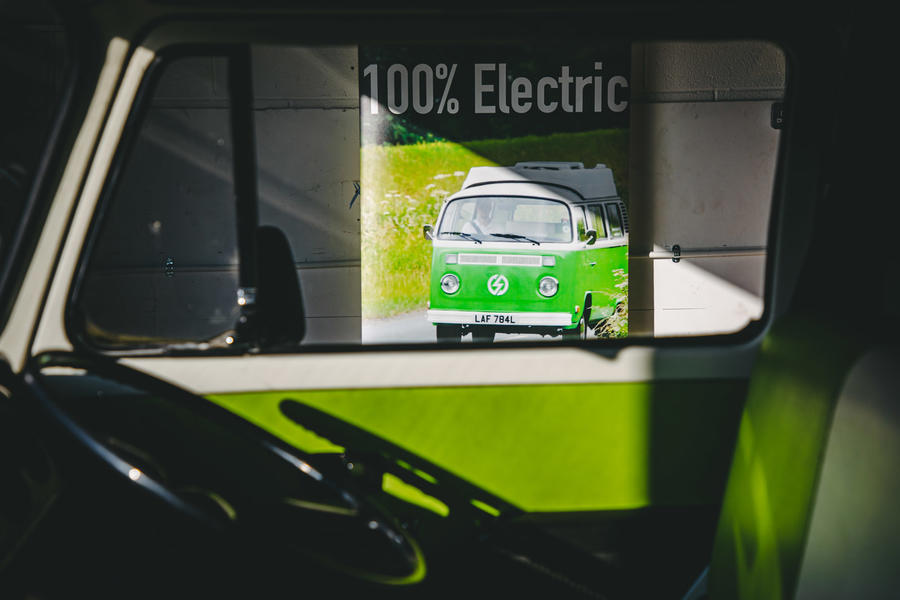 If rewiring an iconic Golf GTI for a battery pack makes you queasy, then hold tight, because eDub’s big project, due in a matter of months, is an electric Porsche 911. “It’s being engineered as a stand-alone kit,” says Lacey. “Customers can bring their cars to us for conversion or buy our own range of pre-built models.”

So how did it get to this point? Well, Lacey can blame his mum. Not only was she an early adopter of a Nissan Leaf in 2011 but also a senior university lecturer specialising in battery degradation. Although Lacey modestly claims he has no actual qualification or background for this sort of business, there’s no denying that he has a plan – and he employs all the right engineers to make his ideas happen.

“I’ve always been a fan of the Volkswagen T2 and was familiar with the Porsche and Subaru engine upgrades, but I became fascinated by a full battery conversion,” he says. “There weren’t many options available, but I came across a converted American import that had been mostly restored and was in grey primer. I had it swapped to righthand drive and went for a full camper look. The technology wasn’t fully there, as the battery management system was designed for solar power so quite basic and flawed.”

Things have moved on massively since then. In the workshop is a customer’s grey T2 with a Nissan Leaf motor, gearbox and inverter re-engineered for rear-wheel drive. The holy grail, though, is a Tesla unit. Conveniently enough, there’s one on the workshop floor, and it’s tiny. In the footprint of a spare wheel are a motor, inverter and gearbox. Not only that but Tesla batteries, says Lacey, are the most energy-dense. 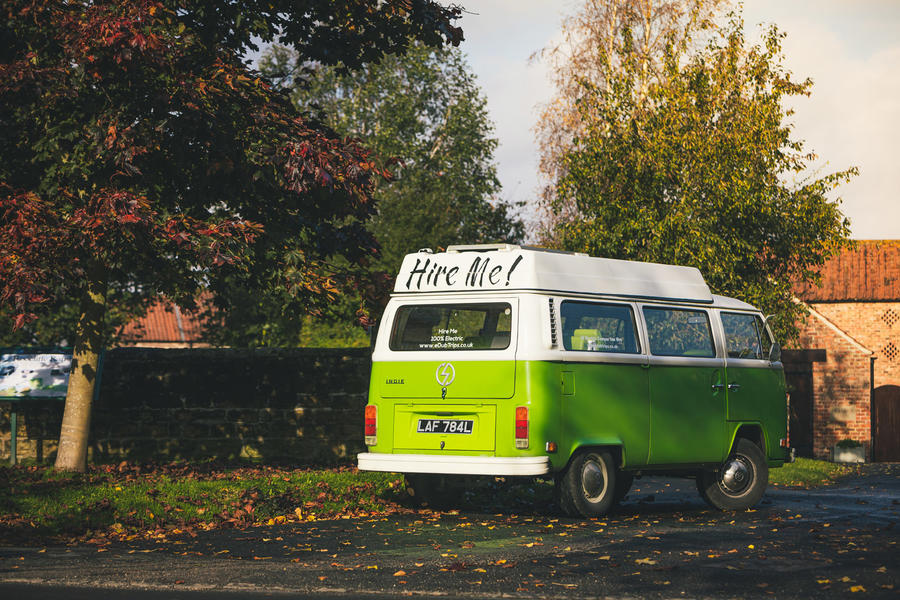 In a battery cupboard are piles of things, looking like silver, ultra-long Battenberg cakes. Lacey says just four or five are needed for the low-voltage T2 and around 14 for the high-voltage model: “We put the batteries under the rear seats, and that instantly makes the handling better.”

To test out that claim, we go for a drive. Actually, we do part of what eDub successfully markets as EV camper van hire trips in the spectacular Yorkshire Dales. We’re in a 1973 Bay Window T2 with an off-the-shelf CALB battery pack powering an HPEVS motor bolted onto the standard gearbox. It has around 65kW, which is plenty enough to push us along enthusiastically, and all we can hear is some whine and the clatter of a 47-year-old vehicle. When it’s stationary, there’s a buzzy brake servo, but that will be upgraded soon. You barely miss the flat burble of the petrol engine, and I doubt anyone watching would realise it’s an EV.

It operates conventionally with three pedals, can’t ever be stalled and eats hills, so it’s perfect for bumbling around the Dales. There’s even an illuminated ‘Turbo’ switch, which delivers a jolt of extra acceleration. The steering is currently unassisted and may necessitate a 32-point turn in tight spots, but a digital fix is on the way. The recommendation for the hire eCampers is a maximum of 80 kilometres per day, which leaves a 30-kilometre cushion, then it fully charges overnight while you sleep in the back at the campsite. Brilliant. 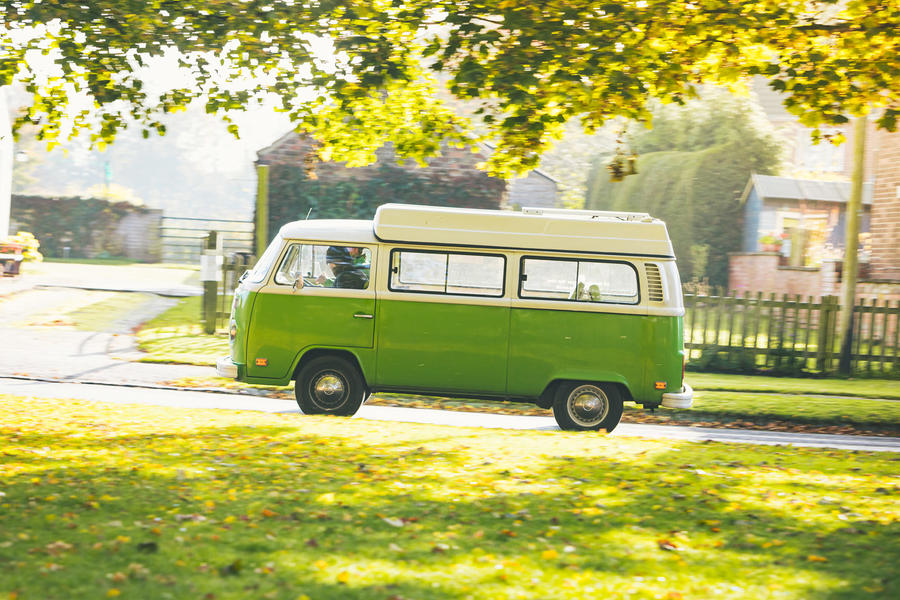 Today isn’t about having an ‘are EVs good or bad?’ debate, and whether the mining of rare earth materials and shipping them around the globe is a truly environmentally friendly enterprise. There’s no time for the relative whole-life cost comparison between conventional engines and electric power, either.

Whether we’re talking about a T2 Camper, a Golf GTI or a 911, these are classic cars. If someone wants to pay to have them converted, that’s their choice. Lacey has clearly proved there’s a market for this service, which admittedly is reassuringly expensive, because doing it properly and doing it safely always has to be.

On the long drive back home from North Yorkshire, I have time to think it all through. Certainly the way Lacey is doing these conversions is textbook, and everything is reversible, so I have the utmost respect for the way eDub operates: if you want your petrol power back, it’s easy enough to do. That GTI belongs to a Volkswagen collector who has boxed up the original engine, so it may live to drink fossil fuels once again.

My battery bottom line is this: go ahead and electrify your classic if you want to. For me, it nullifies the whole point of owning a historically significant and rare car, and it’s also prohibitively costly for the everyday motorist or classic car owner who isn’t a numbskull EV hater but who doesn’t feel the need to expensively eco-virtue. If that makes me an old combustion-engined dinosaur, then so be it.

My Baby Shark BMW, meanwhile, has completed a 371-mile round trip with the briefest of comfort and top-up breaks.

An eCamper 25t – eDub’s Volkswagen T2 Camper Van Conversion kit – consists of a Tesla motor, which gives more than four times the original power, and replaces the gearbox, so there’s no clutch or gearstick. It has a 25kWh battery so should be good for up to 100 kilometres of real-world range per charge. It takes four hours to fully charge at 7kW and costs AUD$60,000, excluding the Camper Van itself. Alternatively, for AUD$85,000, the eCamper 75 offers around 350 kilometres of real-world range and can charge from 0-80% in 90 minutes at 40kW. Restoration of the T2 to a high standard with all the usual trimmings is roughly AUD$25k to AUD$35k, depending on vehicle condition.