A new special edition of the Ferrari 812 Superfast will feature the most powerful combustion engine of any road car from Maranello.

Due to be fully revealed and detailed on 5 May, it is described as “the ultimate expression of Ferrari’s concept of an extreme front-engined berlinetta. The as-yet-unnamed variant brings a raft of visual, mechanical and dynamic upgrades over the standard car, itself beaten in terms of outright potency by only the LaFerrari and SF90 Stradale hybrid supercars.

Power output from the front-mounted V12 has been raised from 588kW to 610kW, which is slightly more than the figure produced by Lamborghini’s new electrically assisted top-rung hypercar, the Sián FKP 37.

It’s not yet clear whether the V12 remains a 6.5-litre unit, but Ferrari has confirmed some of the modifications made to boost power. As well as redesigning “many of the engine’s key components,” the firm has installed a new valve-timing mechanism and a new exhaust system. Among the details released at this early stage, Ferrari has also confirmed that the rev limit is up from 8900rpm to 9500rpm – making this its highest-revving production engine to date and among the quickest-spinning road-going V12s ever made.

That should be enough to reduce the 812 Superfast’s 0-100km/h time from 2.9sec to nearer 2.5sec and push top speed above the standard car’s 340km/h. So far, Ferrari has confirmed no official performance figures, but it has promised that the engine will deliver “pure but brutal power”. 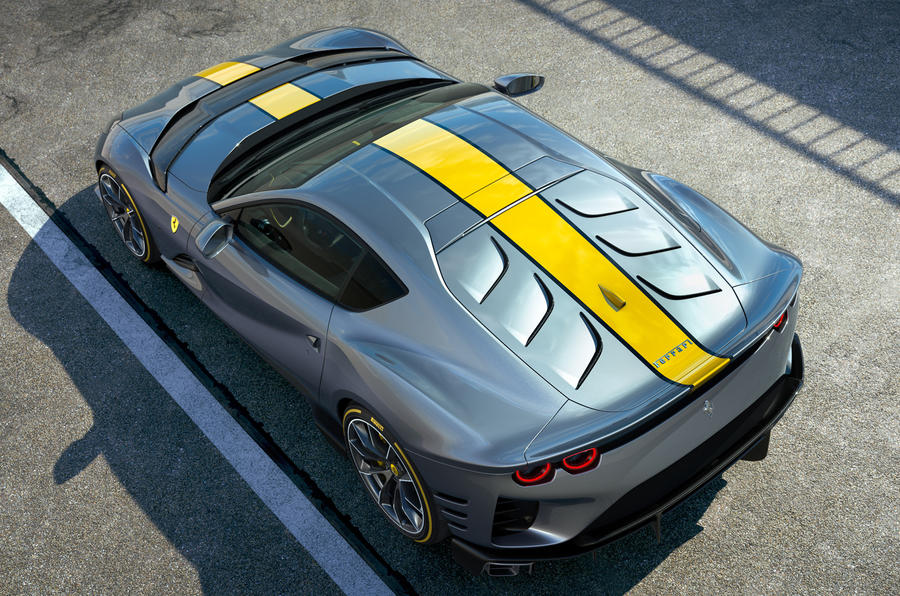 Aside from improved straight-line pace, the special edition also adopts a series of revisions aimed at enhancing handling. Most notably, independent steering is now fitted to all four wheels, which Ferrari claims will extend “the feeling of agility and precision when cornering, as well as providing unparalleled responsiveness to steering inputs”. “Extensive” use of carbonfibre has reduced the 812 Superfast’s 1630kg kerb weight, although by how much it hasn’t yet been confirmed. That’s coupled with a revised aerodynamic package aimed at maximising downforce: the bumpers, splitters and diffusers are new and the rear screen – now an aluminium panel rather than conventional glass – has been fitted with prominent louvres, or “vortex generators”. In addition, the rear spoiler has been raised and the distinctive bonnet strip is now made of carbonfibre. Availability details have not been confirmed, but given that the special edition is pitched at “Ferrari’s most passionate collectors and connoisseurs,” we would anticipate a production run in the low double digits. It will also command a hefty premium over the standard 812 Superfast’s list price of $609,999.