Much is familiar in Maranello, but more is different.

My day with the SF90 Stradale starts outside the famous entrance to the Ferrari factory but with a group of technicians wearing surgical masks. I’ve got one myself, and my temperature is taken by a thermal camera system. There’s none of the drama normal for a big car launch nor the interaction with executives; the technical presentations were shared by video before I flew out. And ‘my’ SF90 really is mine for the day, with no co-driver and stern warnings that nobody else can enter until it has been thoroughly sanitised. Italy may be bouncing back from Covid-19 and Maranello is back to full production, but no risks are being taken here.

Yet things soon get stranger. Once I’m effectively sealed in the SF90’s cabin, prodding the steering wheel’s engine-start button doesn’t produce the familiar cacophony of noise as the engine bursts into life. The only visible effect is to illuminate the word ‘ready’ under the gearshift indicator on the digital instrument screen.

Pulling back the right-hand shift paddle turns N to D and then, with the tachometer needle still pointing at a resolute zero, I’m pulling away in almost total silence and having the entirely novel experience of what is, briefly, a front-driven Ferrari EV.

When the SF90 was announced as Ferrari’s first plug-in hybrid last year, many supposed that, as with the LaFerrari, the electrical side of the powertrain would play a supporting role, as hushed backing vocals to the operatic turbocharged V8 that provides the bulk (574kW) of its astonishing 735kW power output. While that’s true under hard use, the SF90 is a proper plug-in hybrid for urban use, capable of travelling up to 25 kilometres on flowing electrons alone and always starting in the Hybrid driving mode that defaults to electric power under gentle use. With a short enough commute and charging points at both ends, you could drive it forever while doing nothing more than lugging its V8 around as ballast.

Nobody will, of course – and I don’t for long. Well before leaving Maranello, the novelty of a silent and not especially rapid Ferrari has worn off, and I switch to the Performance mode that fires the engine into life. Pressing the throttle harder in Hybrid would have done the same thing, but there’s also an eDrive mode that won’t start the engine. Ferrari reckons buyers will be happy to travel electrically at low speeds and that the feature will be popular with owners heading out for an early-morning blast without disturbing neighbours.

Ferrari hasn’t just launched its plug-in hybrid first among its rivals; it has also demonstrated its technical ability with an astonishingly complex drivetrain. The engine is most easily dealt with: it’s a development of the F154 V8 from the F8 Tributo but with a redesigned cylinder head, higher injection pressures, a slight capacity increase, new turbochargers and an ultra-compact intake manifold. It’s 25kg lighter than the F8’s engine yet makes 45kW more. That’s the easy bit; there’s actually not enough room here to fully describe the intricacies of the electric side of the powertrain. This uses three electric motors: one for each front wheel, working through what’s described as an RAC-e drive mechanism, and the third a cutting-edge ‘axial flux’ motor sandwiched between the V8 and the new eight-speed dual-clutch automatic gearbox.

Electric drive is only ever through the front wheels, and it can happen at speeds of up to 135km/h. The front motors disengage at speeds of more than 209km/h, but that doesn’t result in a drop in output; instead, the 8kWh lithium ion battery’s peak 162kW of current flow is sent entirely to the rear motor. Oh, and there’s no conventional reverse gear: the SF90 always backs up on electrical power. The motors add performance and give instant responses at low engine revs to effectively eliminate the V8’s already-minimal turbo lag. But they also offer torque vectoring on the front axle, much more powerful regenerative braking than previous road-car systems and even the ability to manage wheelslip by upping the amount of energy being harvested rather than reining back the engine.

So in addition to the normal drive-sharpening manettino dial (with Wet, Sport, Race, Traction Control Off and Stability Control Off dynamic modes), there’s a touch-sensitive panel (described as the e-manettino) on the other side of the steering wheel that cycles between e-Drive, Hybrid, Performance and Qualify, the last of which prioritises all-out performance over battery charging. 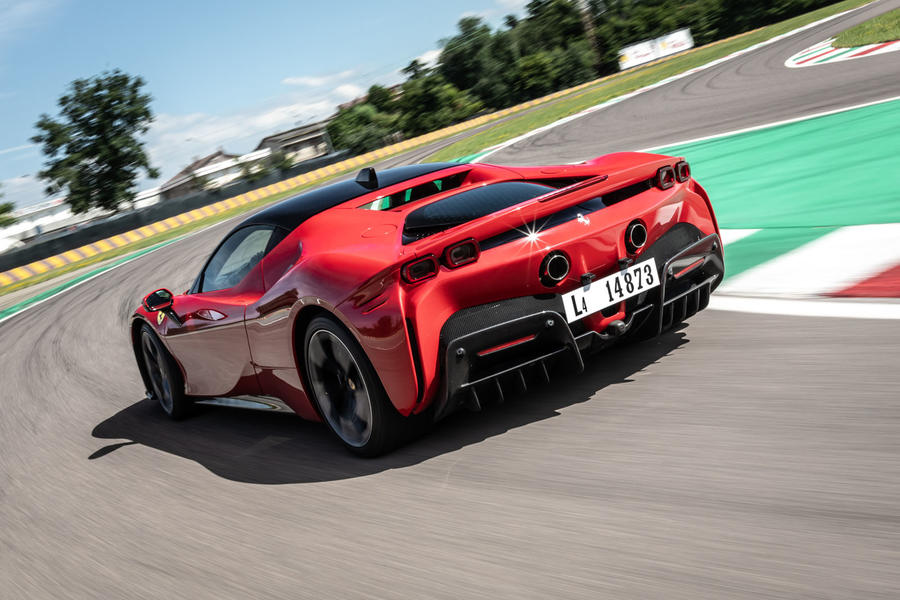 All of this is deeply impressive and hugely complicated. But the good news, rapidly confirmed on a driving route that includes many of the tightest and most demanding roads around Maranello, is that the cleverness is effectively hidden as soon as you start driving the SF90 in a Ferrari-appropriate manner. The electric help is like a magician’s hand: the effect is obvious, but the making-it-happen goes on under the table.

Performance feels every bit as towering as Ferrari’s claimed 6.7sec 0-200km/h time suggests it should, with the tightened ratios of the new gearbox making it easier to indulge the V8’s sonorous enthusiasm for its top end. On any public road, the accelerator pedal will reach its stop only rarely and be held there for brief periods, despite the four-wheel drive system’s impressive ability to digest the full output. Even using little more than half-throttle and short-shifting far below the 8000rpm redline makes the SF90 feel subjectively faster than many bona fide supercars. Indeed, it shifts even more quickly and cleanly than Ferrari’s already lightning-fast seven-speed unit. While the SF90’s structure is primarily aluminium, it uses a carbonfibre rear bulkhead, with diligent weight saving meaning the penalty for the 72kg battery, motors and control gear has been minimised. So, at an official 1570kg dry, it carries an additional 120kg over the F8, but that difference is rarely discernible.

The steering is as deadly accurate as that of every modern Ferrari, and only attacking the tightest hairpins at grossly optimistic speeds produces any sensation through the steering of power sharing the front wheels as the torque vectoring fights to keep the tyres biting. Yet the ride actually feels plusher than the Ferrari norm over rougher roads, with outstanding control of the body’s motions; the SF90 rides out bumps and compressions that had me pre-winced for the expensive sound of carbonfibre on Tarmac. A front axle lifter is optional but, rarely for a modern supercar, probably not an essentially ticked box.

A more worrisome technical first is the arrival of braking by wire on a Ferrari road car. The engineers say this was essential, given the need to blend the effort of the vast Brembo carbonfibre discs with the high levels of regenerative braking through the motors. The SF90’s brake pedal has a very short travel, with pressure on it effectively creating a demand for a certain level of retardation that the system then works to deliver in the best way possible.

Only very gentle pressure is needed at urban speeds, which initially seems incongruous. But it does start to feel much more natural under harder use, and I was fully acclimatised after a couple of hours. The SF90’s Hybrid mode is more of a brain-fry; the suddenness with which the engine cuts in and out takes some getting used to. In a well-insulated mainstream plug-in hybrid, you rarely notice combustion kick in, but this transition from near silence to raucous V8 is startling.

From the outside, the SF90’s aerodynamically sculpted shape is maybe a little short on the drama normally associated with Ferrari’s range-toppers. But with an excellent form-following-function excuse, the interior feels markedly plusher than those of Ferrari’s lesser offerings. Most functions are controlled through touch-sensitive panels, with the 16-inch instrument display offering various modes and configurations. My test car had been given a full carbonfibre trim workout, but there were a couple of ergonomic niggles: the intricately moulded dashboard top causes lots of windscreen reflections and the polished metal gate for the auto/manual, reverse and launch control selectors proved dazzling in bright Italian sunlight. The climate control also has a noisy fan and had to work hard to keep the cabin cool in low-30deg C ambient temperatures.

None of that is going to put anyone off, of course – and the SF90 is also a composed cruiser with a modest but segment-appropriate amount of luggage space under the front bonnet (plus a view of the metal RAC-e controller beneath glass, as with the engine at the back). While the Stradale suffix makes the SF90’s road-going priorities clear, I still got the chance to experience it on Ferrari’s famous test track, being sent out to chase factory test driver Fabrizio Toschi in a hard-worked prototype. I’ve been to Fiorano several times, but the circuit has never felt so compact, with the brutality of the SF90’s acceleration shortening the longest straights like nothing else I’ve experienced here.

Its ability to turn into corners and hook up on the way out is equally impressive, and although Race mode minimises slip, the SF90 remains remarkably friendly with the traction control off, as the front axle works to neutralise yaw angles in a way that feels ridiculously easy in such a car.

The only time the SF90’s extra mass over a more svelte supercar is really noticeable is under hard braking; it can’t generate quite the face-ripping g-forces of something like the McLaren Senna. Ferrari claims that, when specified with the Assetto Fiorano pack, the SF90 can lap Fiorano 1.0sec quicker than the LaFerrari, despite being more than 300kg heavier. And the standard car is only just adrift of its predecessor. 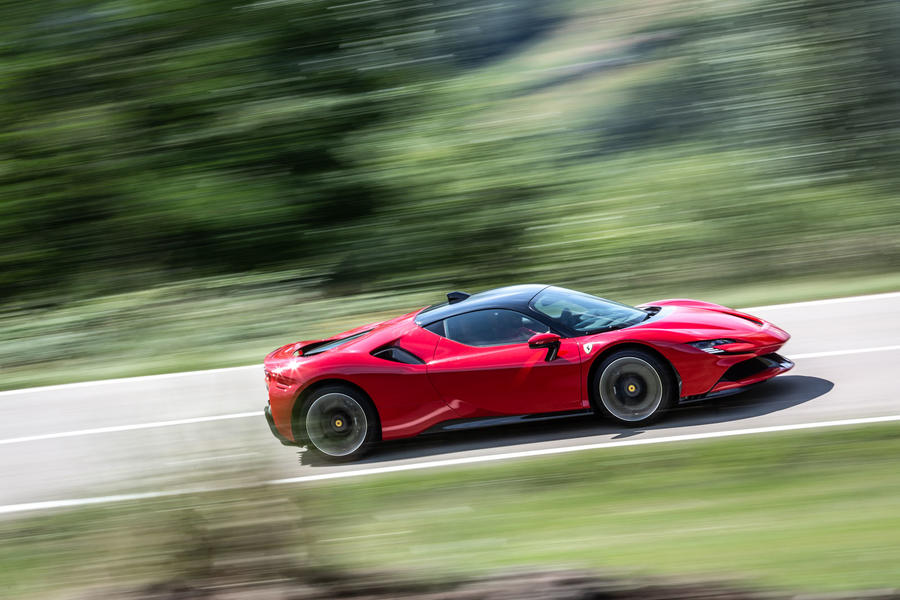 It’s not hard to conclude that the SF90 is much better than it strictly needed to be. Ferrari could have chosen a much less complex system for its first plug-in hybrid – or based it much more closely on the F8, rather than developing what is, structurally, an entirely new car. But it didn’t do that because it’s Ferrari and because the SF90 is a manifesto for its increasingly electrified future.

The very fact that this car offers near identical performance to the AUD$2 million LaFerrari, the limited-edition special that Ferrari reckoned was definitive enough to warrant use of the definite article only seven years ago, is a measure of just how special it is.

How things change in Maranello. How things stay the same. 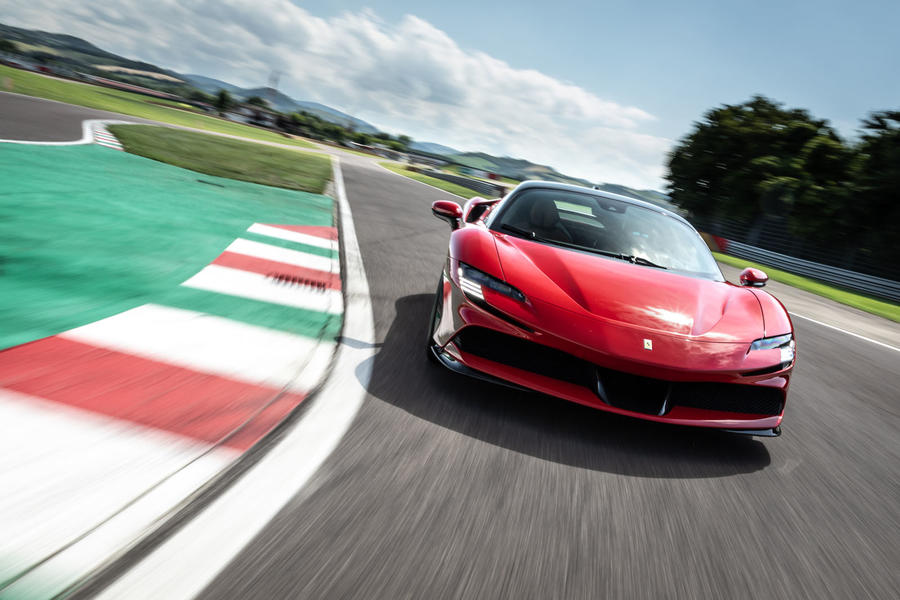