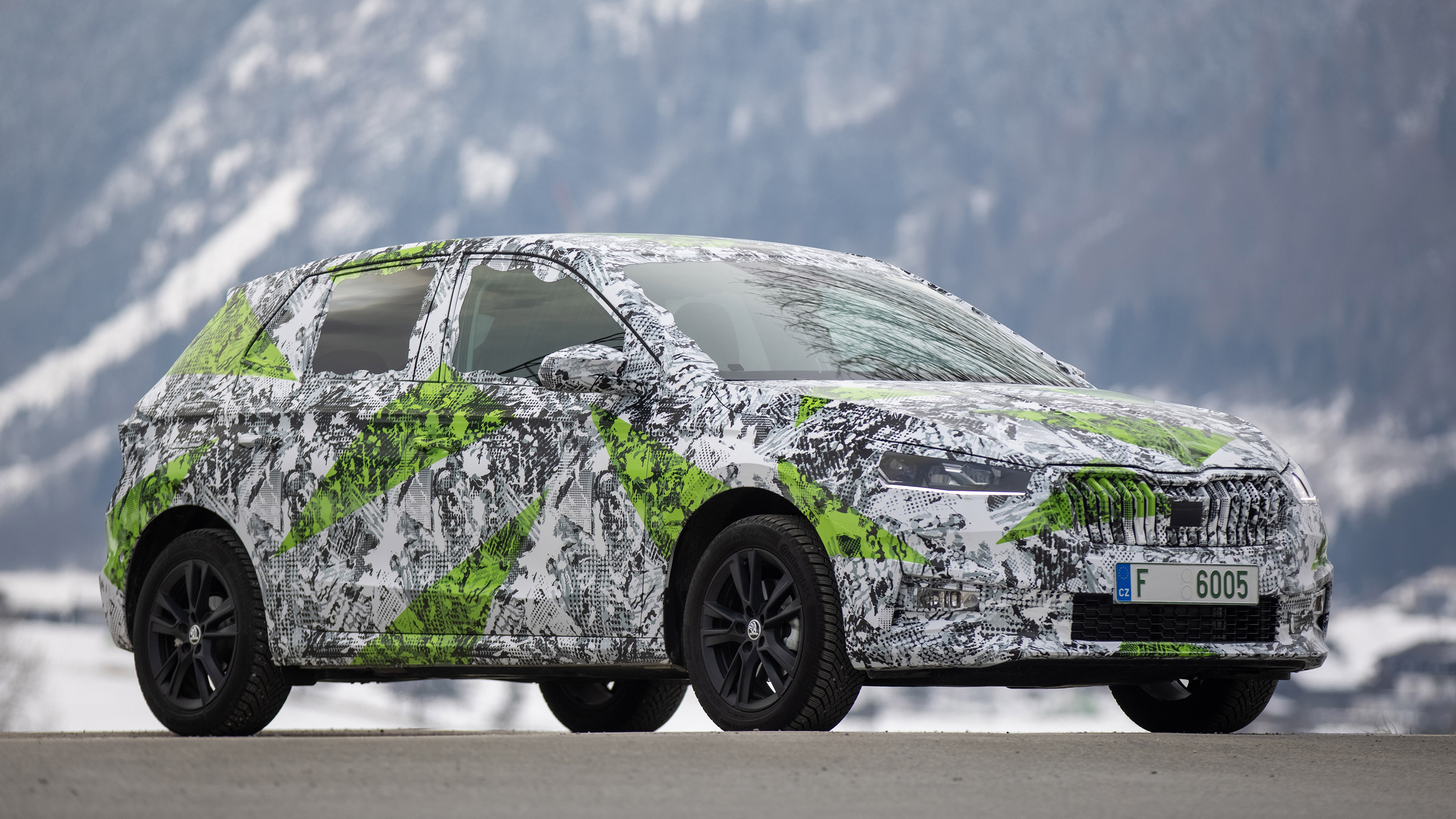 Skoda has confirmed initial specifications for the next-generation Fabia supermini, including the car’s platform, engine range and cabin features. The finished car will be unveiled in April.

The next Skoda Fabia will be based on the Volkswagen Group’s MQB A0 architecture, which is the same platform that underpins the brand’s the Scala family hatchback, as well as the Ibiza and Polo minis from sister brands SEAT and VW.

As a result, the new car will be slightly larger than its predecessor, measuring 4,107mm long, 1,780mm wide and 1,460mm tall. Its wheelbase will also grow by 94mm to 2,564mm, boosting practicality in the process.

Skoda says this has unlocked an extra 50 litres of boot space, taking the Fabia’s maximum capacity to 380 litres. Like the Scala, which is slightly larger than the Volkswagen Golf, the Fabia will be larger than the Polo, with Skoda targeting buyers who want the compact dimensions of a supermini mixed with the practicality of a car from the class above. The new underpinnings will bring Volkswagen’s latest powertrains with them, as buyers will be offered a range of 1.0-litre three-cylinder petrol engines. The entry-level MPI variants go without turbocharging, offering either 48kW or 59kW. Skoda also says that the former engine generates 4kW more than the old Fabia base model.

Skoda will also offer two turbocharged versions of the same 1.0-litre engine, with outputs of 70kW and 80kWp. The former will be mated to a five-speed gearbox as standard, while the latter will feature a six-speed manual – although a seven-speed dual-clutch automatic transmission will be offered as an optional extra.

Volkswagen’s 110kW 1.5-litre four-cylinder turbo petrol engine will also make an appearance, albeit only with a seven-speed automatic gearbox. It’s also equally conceivable that higher-end Fabias could use the same mild-hybrid technology found on the latest Golf and Octavia. Engineers across the different Volkswagen brands have been working on cheaper 12V systems that could be offered alongside its 48V configurations. There are no plans for a plug-in version of the car, though, as the complexity, cost and compromises involved in packaging a battery into a small car like the Fabia remain prohibitive.

Skoda is also keen to stress the safety benefits of the new platform, claiming improvements to both active and passive safety systems. The platform performs better in crash tests than the Fabia’s old PQ26 underpinnings, and buyers will get nine airbags, three seats with ISOFIX points and park assist. Volkswagen’s semi-autonomous Travel Assist system will also make an appearance on the Fabia for the first time, bringing with it adaptive cruise control, lane-keep assist and an optional blind spot detection system. Traffic sign recognition and Skoda’s new manoeuvre assist technology will also feature, with the latter system using sensors to detect obstacles around the car, automatically applying the brakes if required.

Like all Skodas, the fourth-generation Fabia will feature a host of ‘Simply Clever’ practicality solutions. The brand will add 13 new features over the previous-generation car, taking the supermini’s total number to 43.

Classics such as the fuel filler door-mounted ice scraper and ticket holder on the A-pillar will make a return, but they’ll be joined by a pair of smartphone pockets on the front seat backs, a new storage pocket beneath the boot board and a new USB-C socket on the rear-view mirror, which allows for the easy installation of a dashcam.

There’ll also be a new card and coin holder for the glove box lid, a pen holder for the centre console, a new storage compartment on the transmission tunnel and a removable cup holder, which will make its debut on the Fabia. The front passenger backrest will also fold flat, allowing owners to transport long items more easily.

Our latest images of the Fabia show that the next-generation car will look very similar to the outgoing model. Its tailgate is a similar shape, while its headlights share the same DRL signature. The Fabia’s roofline also remains relatively high at the rear, as it still needs to accommodate two adults in reasonable comfort.

The new Fabia’s track and wheel arches are also wider than the old car’s (thanks to the new platform), while its grille has grown in size, which should give the hatchback a more imposing stance. It’s not all for looks though, as Skoda has fitted some clever fuel-saving technology as well.

First, there’s some new shutters for the car’s lower bumper intakes, which automatically close when they’re not required for cooling, contributing to a minor fuel economy improvement. The shutters are paired with a fresh set of aerodynamically efficient alloy wheels and a new undertray, which has been specifically designed to reduce drag.

Skoda says the tweaks have cut the Fabia’s drag coefficient from 0.32 to 0.28, making the new model the most aerodynamically efficient car in its class.

Previous spy shots have also hinted that Skoda’s sporty Monte Carlo trim-level will make it onto the new Fabia. The red mule in our gallery features winglets on the front bumper, wider side skirts, a deeper rear diffuser and a larger tailgate spoiler. Production cars will also come with larger alloy wheels and sports seats.

Inside, the new Fabia should be one of the most spacious cars in its class – and by moving to Volkswagen’s MQB platform, buyers will get improved soundproofing and noise isolation, making the supermini a more refined place on the move.

The new MQB A0 underpinnings will also bring a major technology improvement, with Skoda adopting Volkswagen’s latest MIB 3.0 infotainment system. Some versions of the Fabia will make do with a 6.5-inch display, but Australia models will likely be offered a choice of either an eight-inch or 9.2-inch touchscreen.