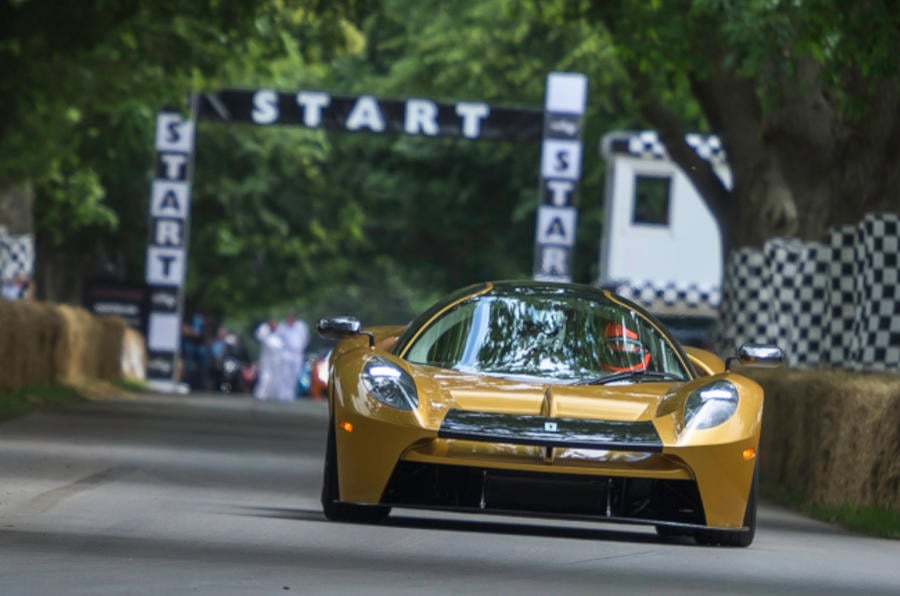 American car maker Scuderia Cameron Glickenhaus has given its 485kW 004S supercar a public debut at the Goodwood Festival of Speed.

The road-going supercar was presented at the festival with a gold exterior paint, black trim and a large rear spoiler, and took to the hill climb as part of the supercar run. It’s based on the track-only SCG 004C, and is powered by a supercharged V8 engine mated with a six-speed manual transmission. The car is handbuilt in Connecticut, and is described by the firm as “as a road car born on the track”. It is expected to go on sale for AUD$620,000, equipped with forged OZ wheels with Michelin pilot cup sport 2R tires and with an optional clear or tinted carbonfibre body option for an additional $100,000.

Other options include front and rear lifters, cabin-adjustable Bilstein shocks and an onboard fire suppression system.

Inside the car, the driver’s seat is positioned centrally with two passenger seats placed behind, and the car is equipped with a reversing camera and infotainment screen with Bluetooth connectivity, a phone mount and USB charging outlets. The American firm was granted legal permission to produce its cars in the US (production was previously handled in Italy) with low volume manufacture approval back in 2017. It’s headed by American film director and financier James Glickenhaus.