Electric turbos should deliver quicker responses, reduce exhaust back pressure and support CO2-cutting engine downsizing all at the same time

We have heard a lot about electric boosting (e-boosting) of diesel engines in the past few years. Several premium brands now use this in conjunction with conventional turbochargers to improve response at low revs and low power, with the conventional turbo taking over at higher power to pump enough air into the engine.

The latest, though, and touted as one way of helping engines to meet future emissions legislation, is the e-turbocharger. This is already used in Formula 1 and is being developed for road use by Mercedes-AMG together with turbo maker Garrett Motion.

E-boosters (or electric superchargers) and e-turbochargers are quite different animals. A conventional turbo is driven by exhaust-gas energy and consists of two main components: a gas-driven turbine and a compressor that actually does the pressurising of the engine intake air.

E-boosters replace the turbine with a 48V electric motor, so there’s no exhaust gas involved. The advantage of an e-booster is that it can generate boost when exhaust-gas energy is very low, killing lag to give a snappy response to the accelerator.

E-turbochargers retain the turbine and compressor but add a motor to boost turbo response by overcoming the inertia in the turbine and compressor that makes them reluctant to speed up. It also aids response when exhaust-gas energy is lower and recovers energy via the turbo equivalent of regenerative braking. When the driver lifts, there’s still plenty of energy in the rotating parts and, initially, in the exhaust gas.

In fact, there’s enough that the turbo keeps generating boost when it’s no longer needed. For that reason, all turbo systems have a wastegate valve, to switch the exhaust flow away from the turbo and directly into the exhaust manifold, and a dump valve, to release boost pressure from the engine intake side. An e-turbocharger harnesses that excess energy to generate electricity, which is stored in the battery of a hybrid.

The Mercedes-AMG Garrett E-Turbo incorporates a motor just 40mm thick, sandwiched between the turbo’s turbine and compressor housings. The motor spins up the turbo compressor prior to the exhaust gas energising the turbine so that, even at idle, response is instantaneous, reducing “time to torque”. The beauty is that one turbo can do the job of both a small, fast-reacting turbo and a larger turbo usually needed to pump enough air at high power.

It means the turbo can, as Garrett puts it, be “right-sized” for the job – something that will be essential for combustion strategies to meet future emissions regulations.

Mercedes-AMG hasn’t said at this stage whether it will follow F1 practice and use the electrical energy recovery feature, but it has said its e-turbo can be used to maintain boost pressure when the driver gets off and then back on the throttle for rapid response.

BorgWarner has developed a similar technology but so far only for truck engines, while BMTS Technology (formerly Bosch Mahle Turbo Systems) announced plans for an electrically assisted turbocharger at the Shanghai motor show last April. 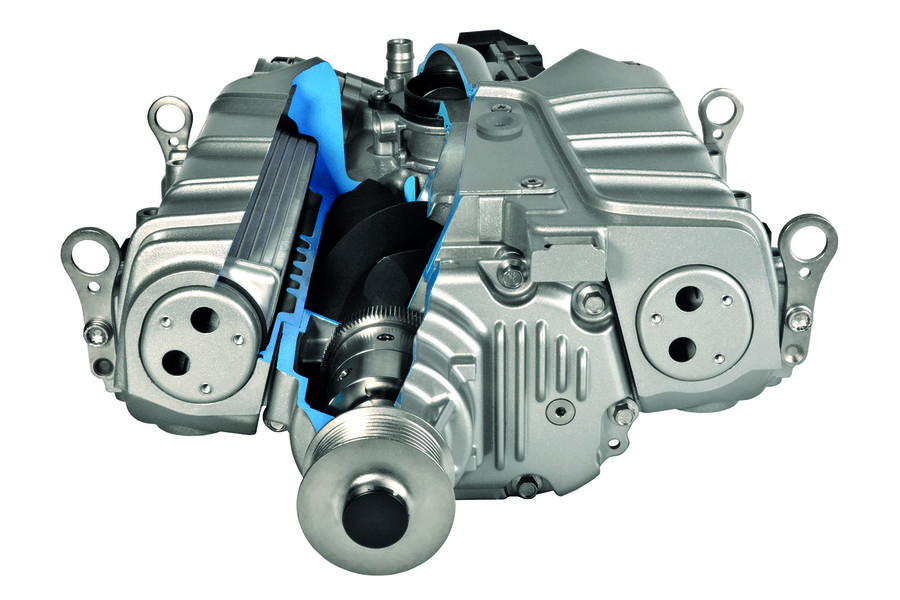 Superchargers are still around, but their use is diminishing, due to the superior efficiency and improved response of turbochargers. The mechanical drive of a blower means it doesn’t suffer from lag, thanks to low exhaust-gas pressures. They’re still used by Jaguar, Land Rover, Lotus, Volvo and a number of American sports cars.