Jaguar Land Rover has developed a new contactless touchscreen to reduce the transmission of bacteria and viruses, including Covid-19.

The patented ‘predictive touch’ technology was developed with engineers at the University of Cambridge and uses sensors to predict the user’s intended target on the touchscreen, so that they don’t have to actually touch buttons and risk transmitting viruses.

JLR claims the innovation, which is part of its Destination Zero project to improve vehicle cleanness and safety, also cuts drivers’ touchscreen use time by up to 50%, reducing the time drivers look away from the road and slashing the risk of accidents.

‘Predictive touch’ works by tracking users’ movements through vision-based or radio frequency-based sensors, using information such as the interface design and an eye-gaze tracker to infer which buttons they intend to press.

Unlike other gesture-based systems, such as the one found in current Volkswagen Group models, including the new Golf, this system goes further than simple left-right and up-down swipes. 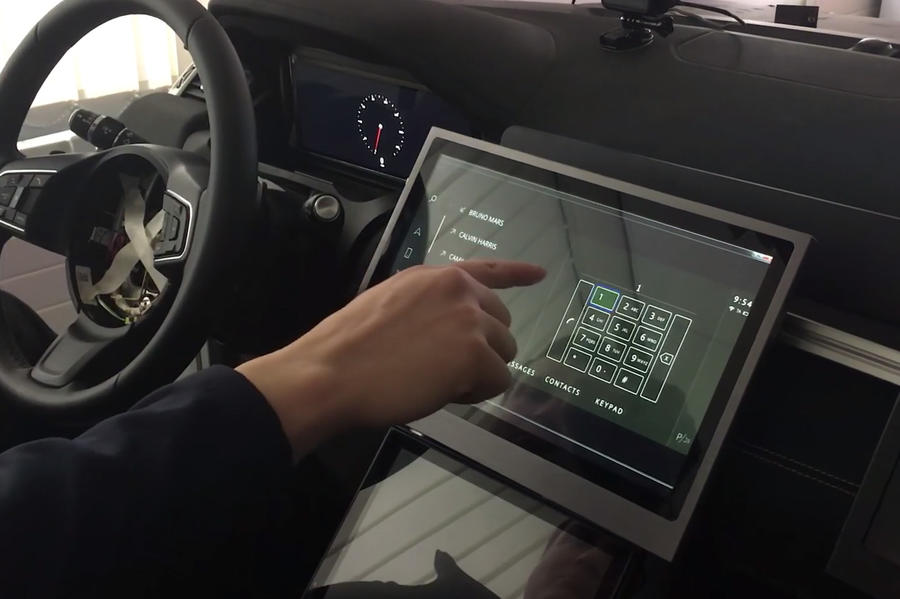 JLR tech specialist Lee Skrypchuk said: “Predictive touch technology eliminates the need to touch an interactive display and could therefore reduce the risk of spreading bacteria or viruses on surfaces.

“The technology also offers us the chance to make vehicles safer by reducing the cognitive load on drivers and increasing the amount of time they can spend focused on the road ahead. This is a key part of our Destination Zero journey.”

University of Cambridge engineering professor Simon Godsill added: “Touchscreens and other interactive displays are something most people use multiple times per day, but they can be difficult to use while in motion, whether that’s driving a car or changing the music on your phone while you’re running. We also know that certain pathogens can be transmitted via surfaces, so this technology could help reduce the risk for that type of transmission.”

According to JLR, the technology can be easily incorporated into existing touchscreens, although there’s currently no indication whether it will be added to either brand’s production models.

It's not going to be easy steadying the ship, and some decisions will surely irk staff. Exciting, isn't it, to get the first clues on...
Read more