Jeep’s first electrified SUV launched ahead of on sale.

Jeep has launched its first electrified SUV: a plug-in hybrid version of the Renegade, with prices starting in Europe starting at around the equivalent of AUD$55,000.

Jeep Australia has dropped the Renegade from its local lineup, so it’s unclear if the model would ever come here. However, Jeep Australia has previously stated that it plans to introduce electrified Jeep products when the time is right.

The Renegade 4xe is the first of several other electrified Jeeps promised by the brand, including a plug-in hybrid Compass and Wrangler which will also wear the 4xe badge, as the American firm seeks to become the “greenest, most sustainable SUV company in the world”. Three trim levels are offered: entry-level Longitude, mid-level Limited, and the range-topping Trailhawk. Jeep says the Trailhawk is more oriented for the extreme off-road, while Limited and Longitude offer a set up more suited to urban driving on tarmac. All three models are available to order now.

Visually almost identical to today’s Renegade, the 4xe gains a rear-mounted electric motor, mounted on a modified version of the AWD Renegade’s rear subframe, mated to a 1.3-litre four-cylinder turbo petrol engine. This can be specified in two output levels: Longitude and Limited models produce a total of 140kW, while customers opting for the range-topping Trailhawk receive a boosted 176kW variant. The battery – which is good for an EV range of 50 kilometres at up to 130km/h in ideal conditions – has been mounted in the floorpan’s centre tunnel and also takes up some space under the rear seat. The fuel tank – also under the rear seat – has been squeezed down to a capacity of 39-litres.

All three versions are claimed to accelerate from 0-100km/h in around 7.5sec, reaching a top speed of 200km/h and producing 270Nm.

As expected given Jeep’s off-roading pedigree, every car in the 4xe range also has four-wheel drive, with Jeep claiming the Renegade PHEV offers the “best performance and driving dynamics of any Jeep SUV ever”. On the outside, the 4xe is further distinguished from its internal combustion engine (ICE) counterparts by blue styling, including blue badging, as well as a charging port push cover.

In addition, buyers can choose from up to 18 different exterior colours including granite, available on the entry-level car. Those opting for the Limited or Trailhawk trims gain extra orange colours, while a further green colour option is exclusively available for buyers of Trailhawks. 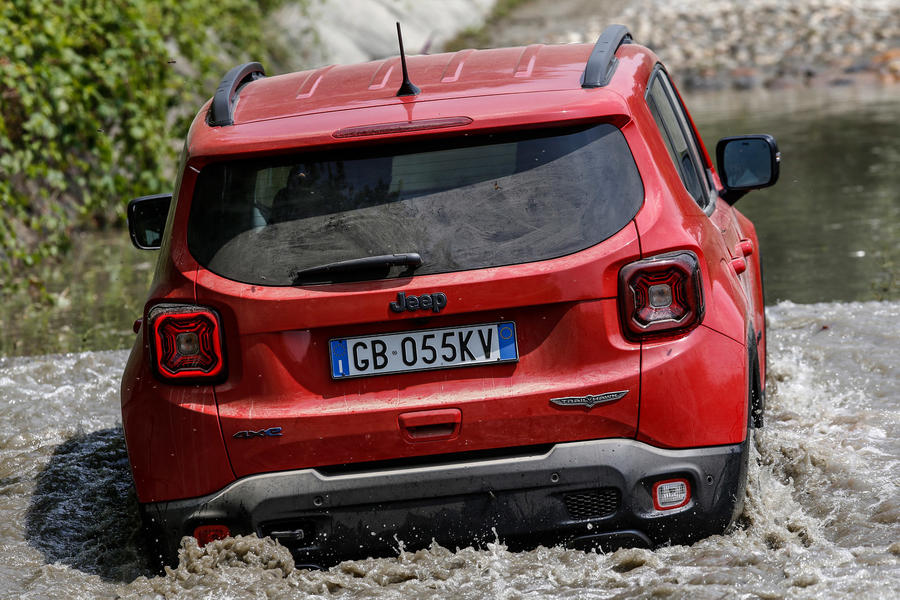 Inside, a 7.0-inch TFT colour display and Uconnect NAV with an 8in touchscreen, Apple CarPlay, Android Auto and DAB radio are offered as standard. Black accents trace the air vents, speakers and centre console bezels on the Longitude and Limited trims. The Trailhawk trim is distinguished by ruby red accents. Former Jeep CEO and now Fiat Chrysler Automobiles chief Mike Manley said in 2018 that there would be four EVs in Jeep’s portfolio by 2022. However, since the executive team has been extensively reshuffled since Manley’s statement, this plan may now be altered.

2021 Jeep Compass receives new tech and facelift inside and...