There probably isn’t a car in the world with a broader spread of talents than the Bugatti Chiron. It’s does luxury and craftsmanship like a Rolls-Royce. It does traffic with no more fuss than a Volkswagen Golf. It does over 400km/h. No, I’m not comparing the new Land Rover Defender to the $4million French hypercar, but its bandwidth is almost as broad. While the old Defender did the rough and tumble better than most, it only did the rough and tumble, even if the road was smooth.

The new Defender, however, is extremely accomplished off-road – I spent two hours bouncing over rocks, wading through water, slipping in muddy quagmires and climbing and descending hills that make Laguna Seca’s Corkscrew look like a pancake – and perhaps even more impressive on road where the vast majority will spend the vast majority of their time. Don’t be fooled in thinking that the old Defender didn’t also spend the majority of its time on the school run or looking suitably adventurous on the way to the local café. The new car might court controversy with the diehards, but it’s still the real deal off road and a much more capable companion on road. The range is capped by the $112,535 HSE and $136,736 X models that are exclusively available with the petrol six. Regardless of engine choice or trim level, all Defenders use an eight-speed torque converter automatic by ZF. Our launch drive was exclusively in the P400 S models, and the 3.0-litre turbocharged six is a cracker. The 400 in its name hints at the 400ps or 294kW that is available from 5500rpm, while the 550Nm torque peak is actually delivered across a plateau from 2000-5000rpm. The engine utilises a 48-volt mild hybrid system that stores recuperated kinetic energy in a lithium-ion battery and that does away with the need for a traditional alternator. According to the official ADR fuel consumption test, the P400 averages 9.9L/100km, and Land Rover claims an astounding 6.1 seconds for the 0-100km/h benchmark. That’s Golf GTI quick. Given Land Rover’s history of excellence off-road, that the new Defender aced the first part of the launch drive was not really a surprise. Very impressive and awesomely capable, but no surprise. The big challenge was whether the new Defender could shine on the road as well and it took minutes to confirm that it had that base covered as well.

Firstly, a short paragraph on the negatives. At 110km/h on the freeway, there’s some wind noise generated by the large side mirrors, and a bit of a grumble from the tyres on coarse chip bitumen. Hustle the Defender through corners (more on this shortly) and the steering can load up. Drive hard and the petrol six enjoys a drink. And that’s it for the negative column. The other side of the ledger is overflowing with entries, starting with an interior that is airy and spacious, and that manages to combine a premium feel that buyers demand with a sense of toughness that pays more than lip service to Defender history. 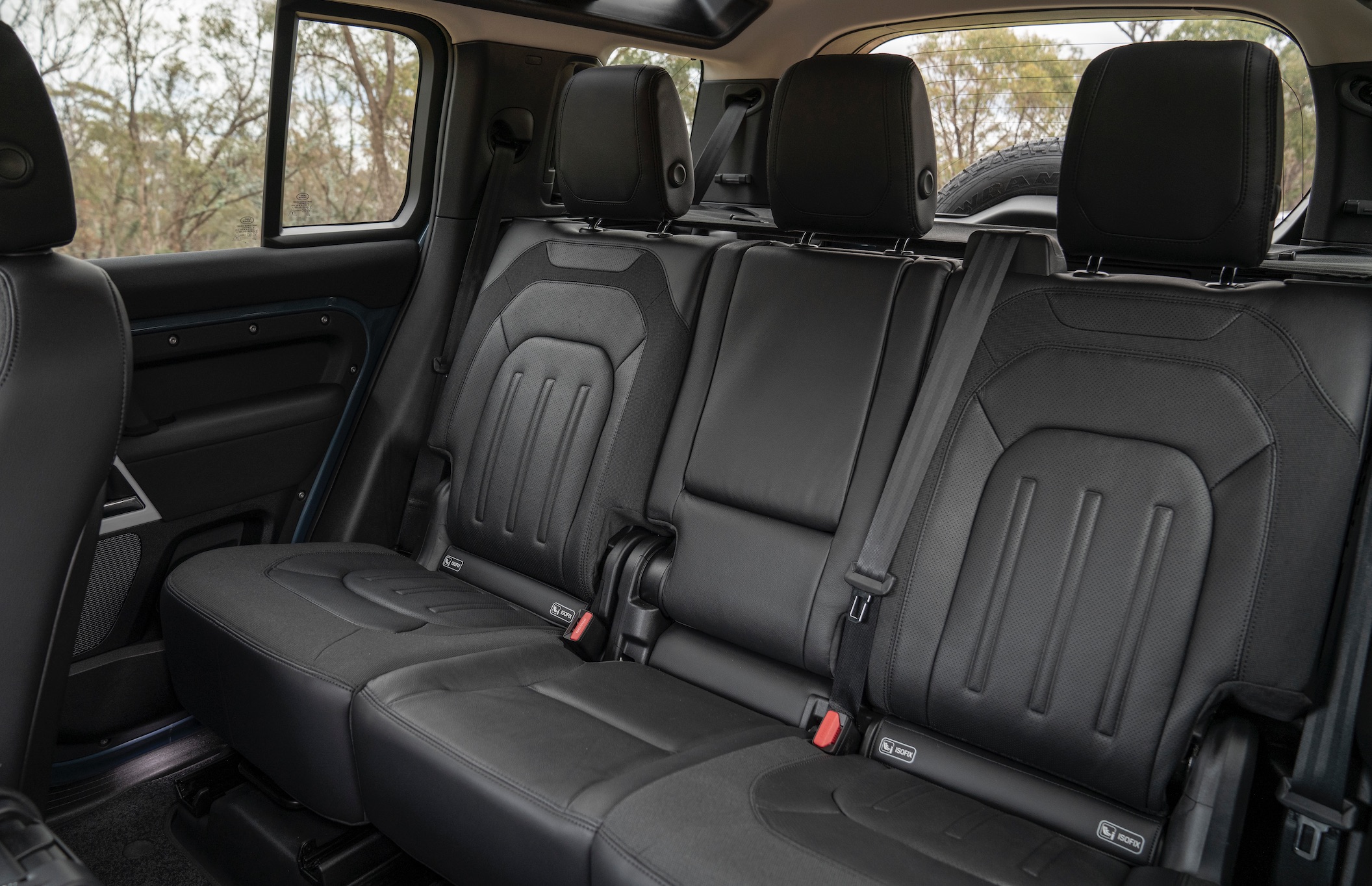 The launch programme started and finished in country NSW, so there was no urban driving, but the new P400 S (on 19-inch wheels with 265/65 all season tyres) rode well, soaking up bumps and lumps with ease, barely noticing the expansion joints on the concrete sections of the freeway. Perhaps not a match for the likes of an Audi Q7, but with a more relaxing gait than a Toyota Prado or Landcruiser and on another planet to the old Defender.

The 294kW turbocharged straight six really does make short work of the Defender’s circa 2400kg weight. It sounds good, with a smooth growl as the revs rise, and an overlay of hard-working turbo whistle as the redline draws near. ZF’s excellent eight-speed auto does its usual stellar job of being in the right gear at the right time. That I was manually punching in downshifts should give some clues to the ability and agility of the chassis.

When an English colleague reported from the Defender’s international launch in Namibia earlier this year that the Defender was akin to an over-sized hot hatch, I thought he might have been a touch patriotic. However, once you account for the weight and size of the Land Rover, turns out that he wasn’t wide of the mark. The launch drive took in roads familiar from numerous supercar drives over the years, but the Defender still managed to entertain against that background. Faster flowing corners are preferred, allowing you to settle the P400 before entry and really hustle it through to the exit. Through longer corners, the steering load builds noticeably but few are likely to drive the Defender in such a manner. Understeer is very well managed so long as you drive within the limits of the tyres. ESC intervened a couple of times when I was optimistic with entry speed or too greedy with the throttle just prior to the exit. Beyond that, the P400 S just gets stuck in and carries on.

Wind back the enthusiasm to a level that most will drive and the Land Rover remains impressive. It feels significantly less truck-like than a traditional heavy-duty 4×4 and more in line with a premium SUV.

Most people will buy the new Defender as a premium SUV, but it still manages to deliver on the legendary off-roading ability first established by Land Rover back in 1947. Against an enormous amount of historical pressure, the new Defender is exactly what it needs to be. Land Rover Defender V8 heard for the first time at...