The new Lotus Eletre SUV boasts at least 440kW, while targeting a range of 600km on a single charge.

Lotus is entering a new era and a new sector of the market with its first-ever SUV, the all-electric Eletre. Retaining the British brand’s naming convention of models starting with an E, the Lotus Eletre has been described as “a momentous point in our history” by the brand’s managing director, Matt Windle.

Based on an all-new 800-volt platform called Electric Premium Architecture, the new model is powered by a battery of more than 100kWh (an exact figure for available energy hasn’t been confirmed) that feeds a pair of electric motors – one on each axle – for a targeted minimum total power output of 441kW. This will rise for higher-spec, even more performance-focused versions, with Lotus aiming for the fastest Eletres to deliver a 0-100km/h time of less than three seconds. By their very nature, EVs are heavier, and while the Eletre is a departure from Lotus’s traditional models and company founder Colin Chapman’s principles of a low kerbweight, there are plenty of innovations in keeping with the marque’s ethos. Lotus’s approach to reducing mass has still been at the heart of development, and the Eletre “takes the core principles and Lotus DNA from more than 70 years of sports car design and engineering, evolving them into a desirable all-new lifestyle car for the next generation of Lotus customers”.

The three-in-one electric motor system that integrates motor, controller and reducer into one package helps save weight in an EV context, for example. Carbon fibre and aluminium have been used extensively throughout the car’s construction, too. 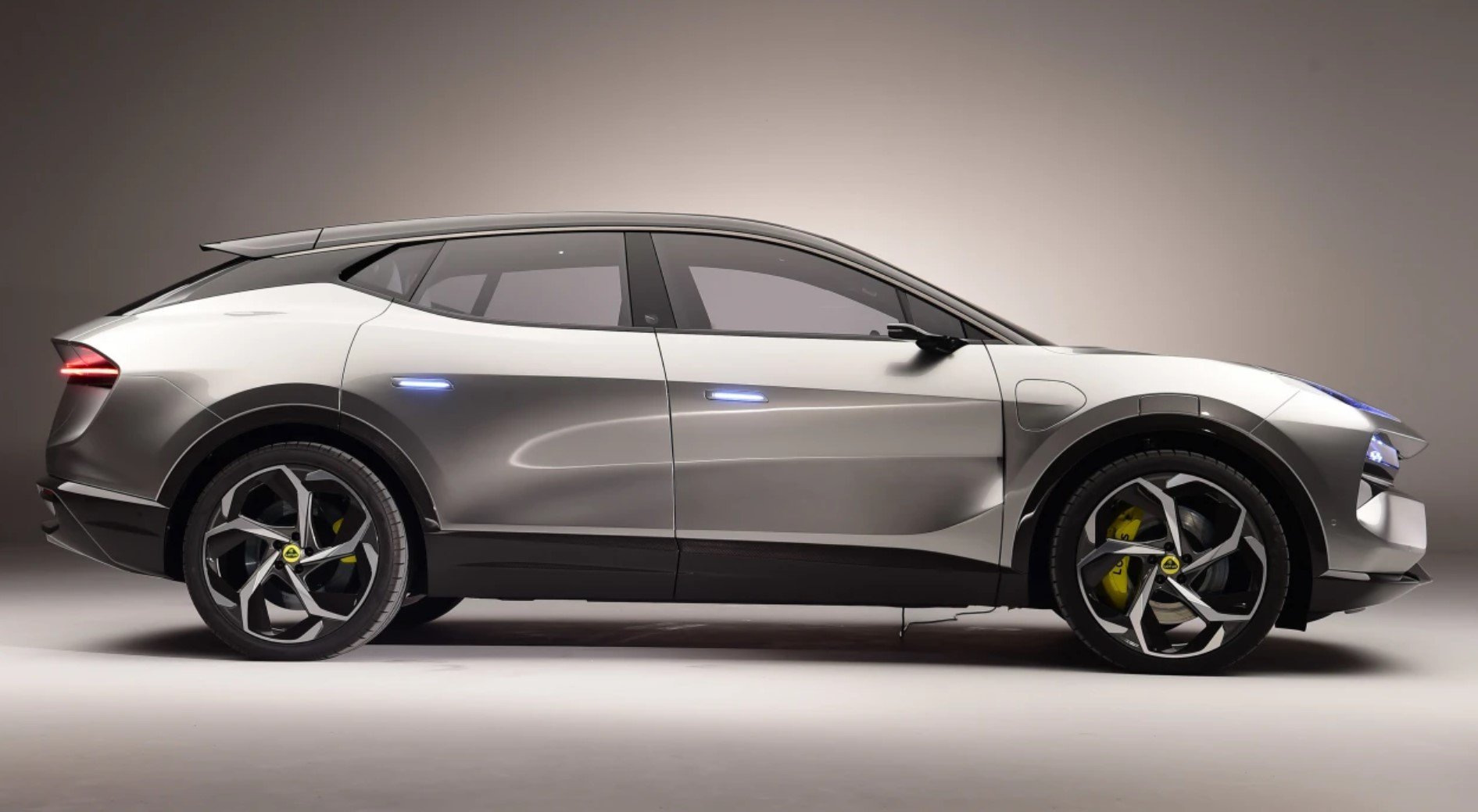 Aerodynamics have also played a large part in the car’s engineering, with a reduction in drag helping to boost the Eletre’s targeted range to 600km, as well as shaping much of the car’s design. With 350kW rapid-charging capability, the car is capable of adding 400km of range in just 20 minutes.

The Eletre’s aerodynamics benefit from cues taken from the Evija hypercar, most notably the rear tunnels – albeit adapted for the requirements of a passenger SUV.  Lotus calls this “porosity”, with air being channelled through the car, as well as around, over and under it. This is evident at the front, where a large vent in the bonnet works in conjunction with the active grille, ahead of and behind the front wheels, as well as the tunnels that exit in the rear bumper behind the wheels; these have been inspired by the Evija. There are also vents at the top of the D-pillars that work with the roof-mounted winglets. These channel air down the tailgate towards the active rear spoiler, which sits above a full-width LED light ‘ribbon’ that can change colour to indicate different messages or usage states. In normal use the strip is red, featuring scrolling indicators at its extremes. It’s animated with a traditional Lotus green and yellow theme on locking and unlocking, while the bar has the potential to scroll from left to right to show the remaining battery charge.When the Eletre’s autonomous driving mode is engaged, the plan is for the LED strip to signify this with a specific colour.

Advanced lidar cameras will facilitate this capability (there’s also lots of active safety kit), with pods that house the sensors popping up at the front and rear of the roof. Digital wing mirrors are fitted instead of conventional items, with screens mounted in the doors. The displays are joined by two more screens, comprising a slim instrument cluster that’s been condensed down to less than 30mm tall (there’s also an augmented reality head-up display as standard), and a central 15.1-inch touchscreen that controls the main vehicle functions.

Lotus has leant on its relationship with parent company Geely for the tech, and while it should be reliable, the graphics certainly look crisp and clear from our early experience of this car. While voice control is also offered, key functions have been duplicated with physical controls for the climate and other main systems to combat the frustrations that often come with touchscreen-only controls. Lotus claims it should still be a simple system to use, with 95 per cent of the car’s functions able to be accessed with only three touches from the main screen.

With 5G capability built in, over-the-air software updates are possible, which the brand claims will allow customers to purchase new features to be activated by software as they become available.

Five selectable driving modes are also controlled through the new interface, with Range, Tour, Sport, Off-road and Individual all available. These alter the parameters of the steering, powertrain, throttle response and adaptive air suspension, which controls a five-link set-up on the rear axle. At 5.1 metres long, with a 3.0-metre wheelbase, the Eletre is a large car, but at 1.6 metres tall, the roof is relatively low, giving a sleek, fast-looking profile.

Along with the flat, skateboard-style platform, this helps keep much of the car’s mass well down in the chassis to lower its centre of gravity. According to Gavan Kershaw, director, attributes and product integrity: “Dynamically, the Eletre has been developed to deliver everything you would expect from a Lotus – outstanding ride and handling, highly communicative steering and exceptional driver engagement. From a performance perspective, we know the world is watching so there has been an obsession with getting everything just right.” The design and development has been led by Lotus’s UK team under the tagline ‘Born British, Raised Globally’, the latter part of which also alludes to the all-new Chinese factory where the Eltere will be built from later this year. Prices are set to start from around £100,000.

The man who heads up the Coventry-based Lotus Tech Creative Centre talks us through how the brand has applied the Lotus ethos to a new class of car.

Q: Some fans of the brand will say an SUV can’t be a proper Lotus. What do you say to them?

A: “The Eletre is a Lotus through and through. The brand is changing and it’s a new vehicle for us in
a new category, so it has a slightly different focus, but it’s still a Lotus at its core. We’ve applied the Lotus DNA – lightweight engineering and innovation – throughout the car in an EV context. The lightweight motor system, the materials, the aerodynamics, lots of clever technical solutions.”

Q: This is a new era of design for Lotus too, but are there any nods to past Lotus models?

A: “There are. The rear graphic is very simple, for example, and above the badge and the light strip there’s a negative surface, just like on the Elise. Small touches like this reference our history as we look to the future and what it holds.”

Q: Lotus models are always driver focused, so how difficult was it to integrate all the tech a modern SUV needs without losing the simplicity inside?

A: “This was a big challenge, but the simple digital display and the central screen that can be turned off really help to keep the driving environment uncluttered; we also wanted physical controls for simplicity. There’s another LED light ribbon inside that can be used to highlight certain elements, while we wanted to give a technical, bespoke feel with the switchgear. Different interior themes will be available, too.”