The new Lotus Evija has been shown at London’s Concours of Elegance, as the company gears up to begin customer deliveries in 2021.

The hypercar’s second public appearance – following a debut at last week’s London Concours – comes following the company’s announcement that deliveries have been pushed back five months as a result of the pandemic. As exclusively reported by Autocar, lockdowns, travel restrictions and quarantine rules hampered the firm’s ability to continue the model’s testing programme, which will recommence as restrictions ease. More recently, Lotus ended it’s technical development partnership with Williams Advanced Engineering, which had seen the two forms collaborate on the Evija, citing “delivery problems”. Hethel added that “the end result will be a better product” as a result.

Claimed to be the most powerful production car in the world, the 1471kW electric hypercar is sold out for its initial 2020 production run.

A video of the newly designed configurator show how the ordering experience begins for buyers.

The Evija is being built in at a refurbished facility at Lotus’s headquarters in Hethel, Norfolk, called Factory 3. Work on the facility, which is a former Lotus Engineering building that was once home to the Vauxhall Lotus Carlton, is now near completion. Each of the 130 Evijas will be hand-built there.

Lotus has told Automotive Daily’s exclusive partner Autocar that all of the Evijas due to be built this year have already been sold, although it hasn’t given an exact figure. “With our new factory ready, we are ahead of the pack in the emerging EV hypercar segment and 100% ready for some healthy competition,” said Lotus boss Phil Popham, an indirect reference to the likes of the Pininfarina Battista that have so far remained quiet on sales.

Dynamic testing of the car got underway earlier this year at Lotus’s Hethel test track, which sits adjacent to the Evija production facility.

Gavan Kershaw, director of vehicle attributes at Lotus, said: “Physical prototype testing at speed is a landmark moment for the Evija and hugely exciting for everyone involved. Our aim is to make sure it’s a true Lotus in every sense, with exceptional performance that’s going to set new standards in the hypercar sector.” While most track testing will be done at Hethel, Lotus claims it will use other demanding European circuits, too. “Over the coming months several prototypes will cover many thousands of miles and hundreds of hours of driving assessment, including on public roads” the maker said in a release. An output of 1973bhp is promised for the Evija, which is more than the 1408kW Battista and Rimac C_Two and the 1103kW petrol-powered Bugatti Chiron currently in production. 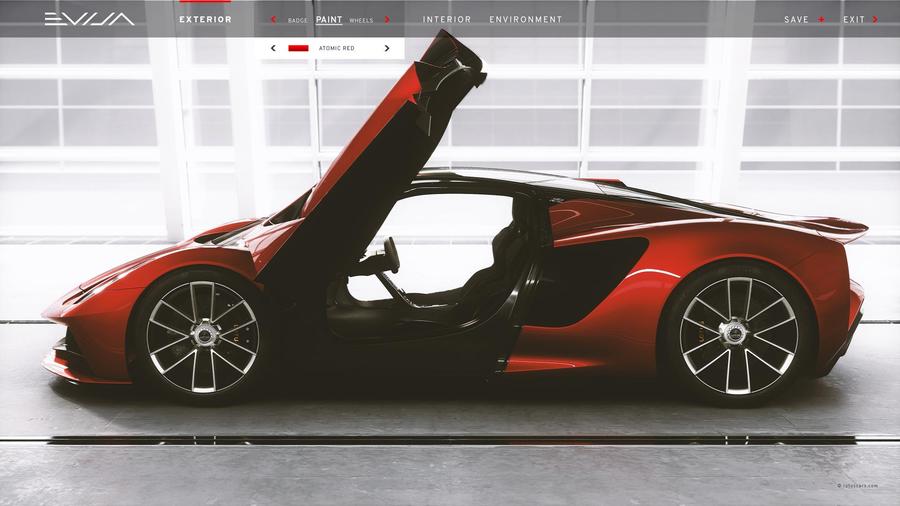 The Evija, pronounced ‘E-vi-ya’, will be Lotus’s first new-model launch under Geely ownership, and is the maker’s first all-new model for more than a decade. It will act “as a ‘halo’ for the rest of the Lotus range” both now and for “new Lotus performance cars to come”.

The Evija, which is codenamed Type 130, is low and broad, at 4.59m long, 2.0m wide and 1.12m high. According to Lotus, it “marks the beginning of a contemporary new Lotus design language”. 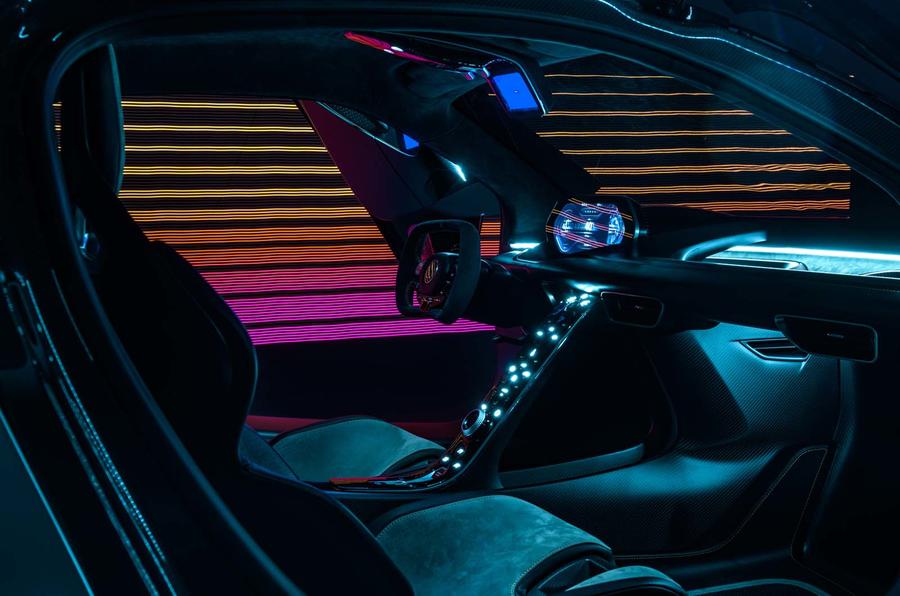 “We wanted from the start to do something that was pure, simple, but have a sense of luxury and elegance about it,” said Carr. “On the outside, we started by thinking ‘what are the existing factors from the Lotus DNA that we want to keep?’, and really important for us were the strong haunches you see on the car. It’s very important when you’re sitting inside that you can see the corners of the vehicle – it helps you place the car on the track. It’s also just a very emotional thing to see the bodywork; rearwards as well.”

“We have the cabin sat low within those fenders, which are really important to us because the car’s all about dynamics,” said Carr, “and if the cabin sits low and the fenders are pronounced, you have the impression that the car’s got a low centre of gravity.”

Around the overall design simplicity come some advanced aerodynamics (see Carr Q&A, below), which direct air flow over, under and through the car, creating a complex body shape with vast scoops running through the rear three-quarters, and exiting at the back. 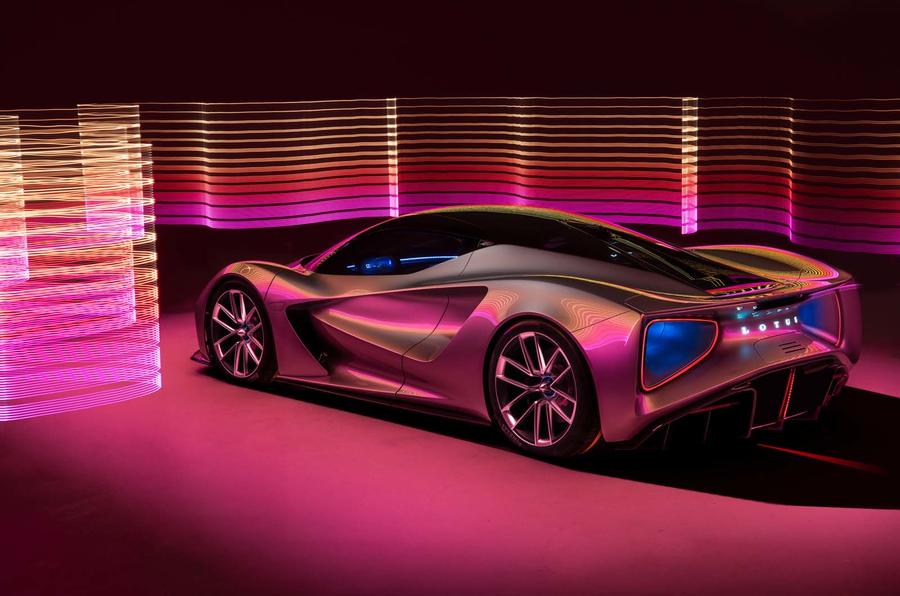 The design is permitted by the adoption of electric drive. “That certainly gives us a lot more freedom, yes,” said Carr. “You’ve obviously got battery packs that can be placed in certain places, and it’s certainly different from a traditional combustion engine, and we’ve tried to exploit that as much as possible.”

Lotus hasn’t yet revealed how many electric motors the car will have or where they’ll be positioned, but its partnership with Williams Advanced Engineering – which is, among other things, the supplier of batteries to the Formula E grid – will be key to the Evija’s performance.

Lotus said the Evija will have a 70kWh battery, capable of being charged at up to 350kW, enabling an 18-minute charge with a WLTP range of around 400 kilometres. The charge port is at the rear of the car.

Construction is from carbonfibre, both for the chassis and the body. Light weight is core to all Lotus models and the Evija weighs several hundred kilos less than the Battista and C_Two are reported to be, although they have more battery capacity. Even so, at 1680kg, the Evija is likely to become the heaviest Lotus ever. Despite this, Lotus boldly claims it will “set a new standard for Lotus driving performance” and be “the most dynamically accomplished road car in the history of Lotus”.

Inside, the carbonfibre construction remains visible in what’s a relatively spacious cockpit. “The start point is a floating beam, this open instrument panel you can place your hand right through,” said Carr. “The inspiration for that came from classic racing cars, from the 1950s and ’60s, in which you can see the structure. In those days it would have been tubular, but on this it’s carbonfibre. 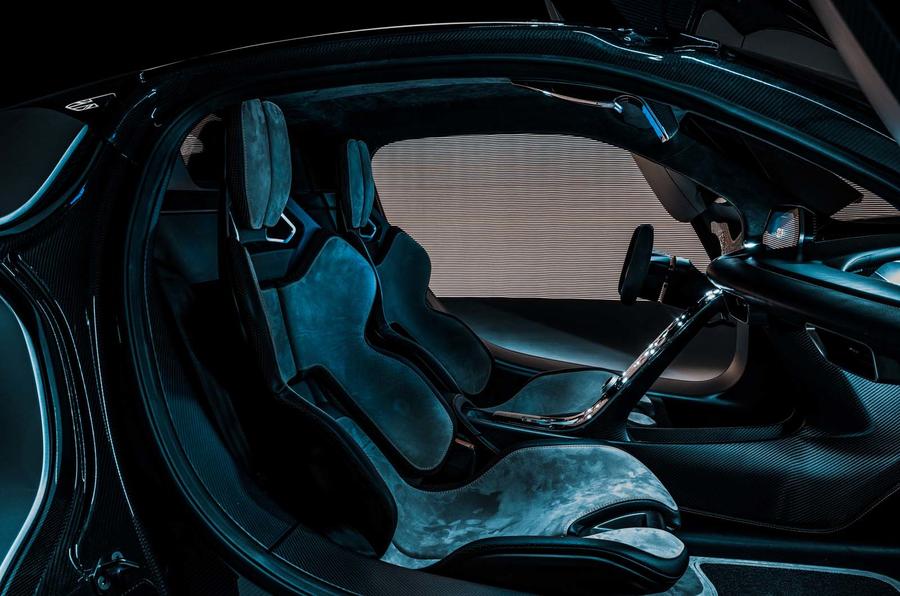 “We wanted to use carbonfibre, and once we got into that we started looking at wishbones on racing cars. We looked at modern racing bicycles as well, and that informed some of the sections and forms that go in there. And that’s really become a very distinctive part of this interior. If you love modern racing bikes or componentry on racing cars, you’ll recognise that.”

“It’s a nice shape to use as well, with the wing profile, and adds a strong aeronautical flavour on the whole car. It’s very distinctive,” Carr added. “There’s a certain luxury to space and in such cars you can feel very claustrophobic. This feels open.”

That’s in stark contrast to another upcoming hypercar, the Aston Martin Valkyrie, with the implication that the two British hypercars will be quite different, in ethos as well as propulsion.

“We wanted, if this doesn’t sound ridiculous, a really usable hypercar,” said Carr. “The Evija is very much a road car. But obviously the performance credentials of this car mean that it can be driven on the track. 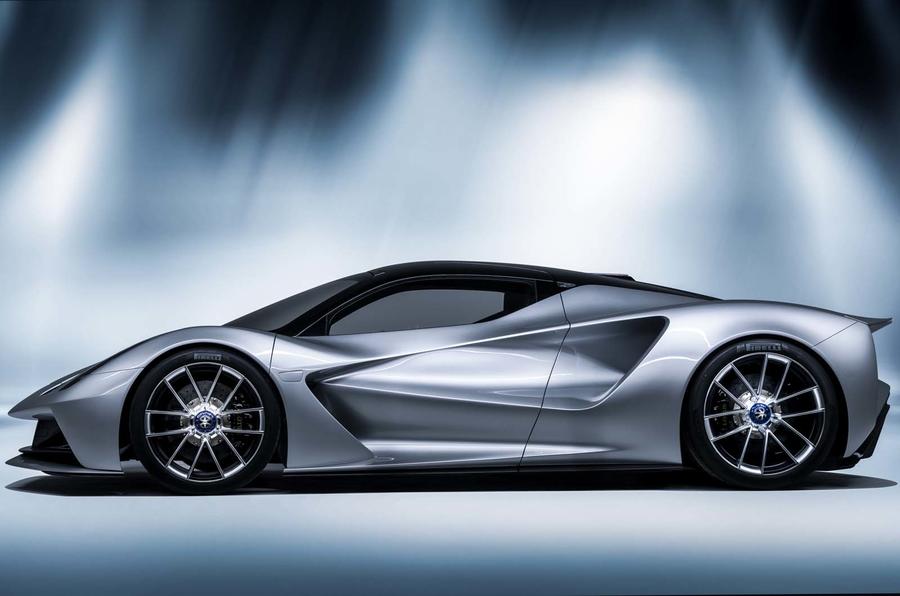 “Certainly from our side the work we’ve done on the aerodynamics means that it’s going to be an extremely quick car, generating a huge amount of downforce, which means it can be driven at high speeds. It’s going to be a stable car wherever it’s driven.”

Tell us about the way air moves around this car.

“Something very Lotus which we’ve taken to another level is the aerodynamics. It’s always been part of our history and motorsport: in the ’60s we were among the first teams putting wings on cars, we had ground effects in the ’70s and streamlining way back in the ’50s. With this car, the philosophy was that we wanted to harness the airflow over the body of the car, but also through the body of the car. We’re not the first people to do it, but we wanted to do it in a very sculptural manner that would give a different aesthetic to the car.”

What does that mean for aesthetics?

“When you look at the car from the outside you see familiar volume, we hope a very beautiful-looking car. It’s important that it’s beautiful in the first place. But as you walk around it you start to see openings that go through the car, which allow the air to pass through. As I say, that gives it a different aesthetic, draws the eye through the car and over the car, and gives it a great sense of movement.”

Engineering firm begins legal action against Lotus, claiming the decision is "wrongful and without any legal basis"
Read more