McLaren has confirmed that its first series-production hybrid, the Artura, will be unveiled in a “spectacular showcase” on Wednesday 17 Feburary.

The firm will launch the new machine, which it has labelled a ‘High-Performance Hybrid’ (HPH), as a replacement for its long-running Sports Series line. Giving the new model a word-based name separates it from the system used for the Sports Series line, which used a number-based nomenclature relating to power output.

McLaren has previously used names for only certain Ultimate Series models, including the Senna and Elva, both of which were linked to its motorsport heritage. The firm has yet to give a full reason for the Artura title. Described by the Woking firm as a ‘next-generation’ supercar, the forthcoming machine will arrive with a hybrid powertrain based on a new V6 petrol engine. McLaren has previously used hybrid powertrains on only range-topping machines such as the P1 and Speedtail.

Confirming the new nameplate, McLaren boss Mike Flewitt said: “Every element of the Artura is all-new – from the platform architecture and every part of the High-Performance Hybrid powertrain, to the exterior body, interior and cutting-edge driver interface – but it draws on decades of McLaren experience in pioneering super-lightweight race and road car technologies to bring all of our expertise in electrification to the supercar class.” 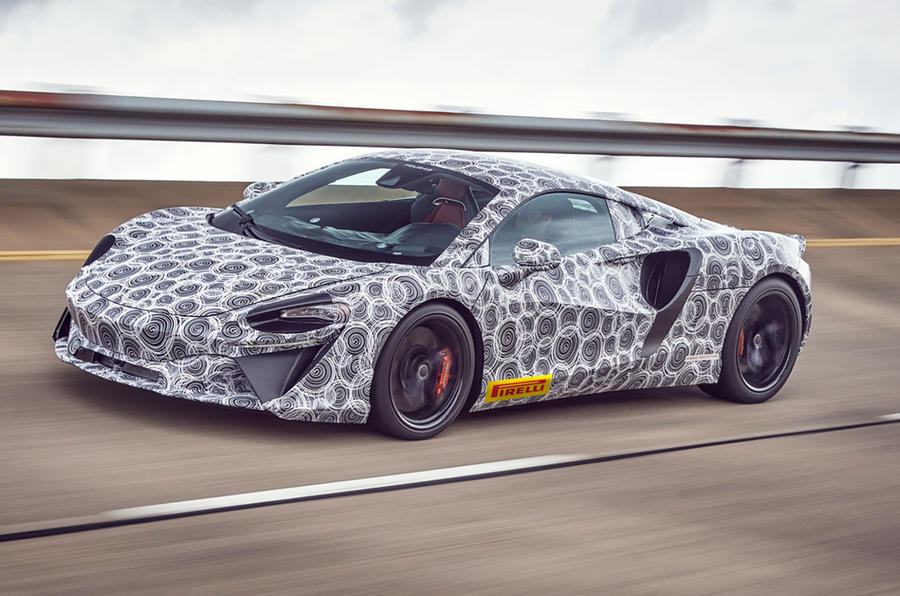 Although technical details have yet to be revealed, McLaren claims it “retains the performance benefits of McLaren’s larger-capacity V8 engines and has the additional attraction of improved torque response at low-engine speeds to deliver scintillating acceleration”. It will also offer “medium-range” electric-only running, which is believed to be around 30 kilometres.

Automotive Daily also understands that the system in the new car, which has previously been spied testing, will be a plug-in hybrid, with the power from both the turbocharged V6 and electric motors sent to the car’s rear axle.

The Artura will be built on the new McLaren Carbon Lightweight Architecture (MCLA) platform, which, McLaren said, has been optimised for the hybrid powertrain. It added that the new architecture takes the firm’s lightweight chassis technology “to new heights”, which will be key to McLaren’s intention to minimise the added weight caused by the heavy batteries required for the electrified powertrain. Flewitt has described the Artura as “a new kind of McLaren for a new era, an extraordinary driver’s car that offers blistering performance as well as an all-electric range capable of covering most urban journeys.”

The HPH supercar is designed to sit between the recently launched GT and the Super Series 720S, the positioning that has traditionally been filled by the Sports Series line.

The Artura is just what McLaren needed