McLaren’s next step as an electrified sports car maker will be with a new lightweight tub for its first hybrid.

McLaren has unveiled the lightweight carbonfibre architecture that will underpin its upcoming electrified models as it gears up to launch its first hybrid next year.

Developed at the firm’s new Composites Technology Centre (MCTC) in Sheffield, the platform has been designed with a focus on lightness to cancel out the added weight of an electrified powertrain.

It is said to use “world-first processes and techniques” in an effort to reduce weight while maintaining structural integrity and improving safety. Software determines the ideal shape and orientation for each sheet of carbonfibre cloth, for example, to optimise the shell’s strength and weight.

CEO Mike Flewitt previously said that his ambition was “to launch the hybrid at the same weight as the outgoing car”.

He added: “We’re not going to hit that, but we’re going to be within 30-40kg. When you think the P1 hybrid system was 140kg, we’ve done a huge amount to manage the weight.” 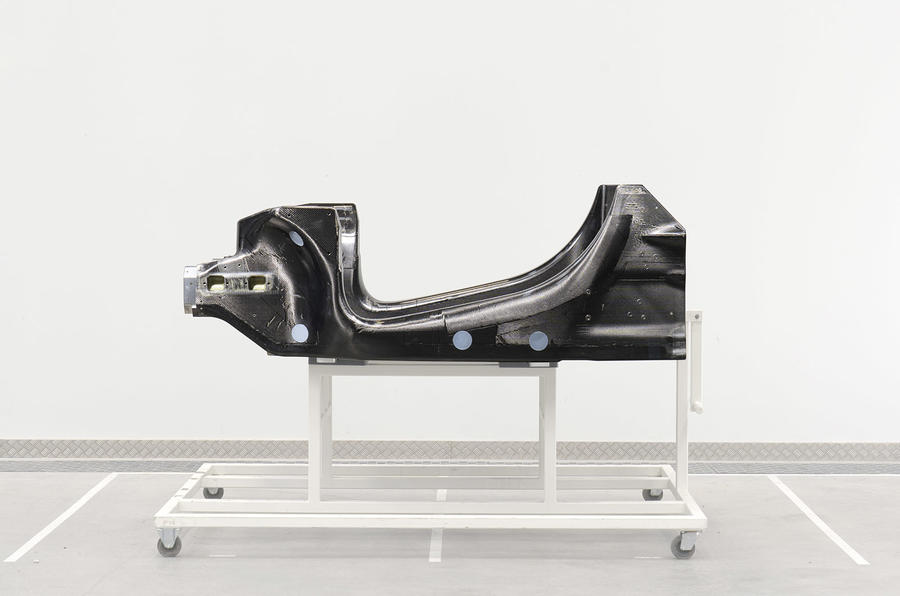 A prototype of the new ‘Monocell’ architecture – codenamed PLT-MCTC-01 (Prototype Lightweight Tub, McLaren Composites Technology Centre, Number One) – left the MCTC facility in 2019, with a crash testing programme set to get underway ahead of the launch of the first Monocell-based car.

McLaren previously said the Sheffield site’s workforce would swell from 60 workers to more than 200 when the architecture enters production.

Carbonfibre tubs for the Speedtail hybrid hypercar and new McLaren GT are produced by an Austrian firm called Carbo Tech, but the MCTC will handle production of the new Monocell unit. The company is transitioning to a maker of electrified sports cars and will roll out hybrid powertrains to all of its Sports Series models, which will each be based on the new architecture.

Earlier this year, the company’s first hybrid Sports Series model (the P1 and Speedtail belong to the Ultimate Series line-up) was spotted in prototype form, revealing a production design similar to that of the new GT. Current Sports Series models include the 600LT, 570S and 540C. The as-yet unnamed plug-in hybrid model will take its power from a twin-turbocharged petrol V6 mated to an electric motor of unknown capacity. Performance figures remain unconfirmed, but it’s expected to manage 32km of electric-only range from a single charge.

McLaren CEO Mike Flewitt said:“The new ground-breaking vehicle architecture is every bit as revolutionary as the Monocell chassis we introduced with the company’s first car, the 12C, when we first embarked on making production vehicles a decade ago.

“This new, ultra-lightweight carbon fibre chassis boasts greater structural integrity and higher levels of quality than ever before with our new MCTC facility quickly becoming recognised as a global centre of excellence in composite materials science and manufacturing.

“Our advanced expertise in light weight composites processes and manufacturing combined with our experience in cutting-edge battery technology and high-performance hybrid propulsion systems means we are ideally placed to deliver to customers levels of electrified high-performance motoring that until now have simply been unattainable.”

Automobili Pininfarina has completed its first high-speed testing of the 1417kW electric Battista ahead of customer deliveries in 2021. The Battista, which shares powertrain tech...
Read more

No production car has ever gone faster around the Nordschleife than new hardcore two-seater. The Mercedes-AMG GT Black Series has claimed the Nurburgring production car...
Read more
Facebook