The all-electric two-seat MG sports car is poised to follow the likes of the MG TF and MGB, and our exclusive renderings preview how it could look.

MG has built much of its reputation on small, simple roadsters that were fairly affordable, but aspirational. This is something that the Chinese-owned iteration of the brand hasn’t been shy to emulate. And now a new MG sports car takes a step closer, as fresh leaks all but confirm that the brand is returning to its roots, with a small, probably all-electric roadster.

The car could hit the roads in 2024 to coincide with MG’s centenary, possibly with an MGC EV badge, following parent firm SAIC filing a trademark for the name. Direct rivals will be few and far between, but the new car could give buyers of internal combustion-engined convertibles like the Mazda MX-5 and BMW Z4 a new avenue to explore.

Back in 2017, MG unveiled its E-Motion Coupe concept. Designed to be a flagship all-electric coupé, the project now looks dead in the water. Attention has turned to a drop-top car based on last year’s Cyberster concept. It was successfully greenlit for production after a crowd-funding effort that saw over 5000 potential buyers place money down to make it happen. MG could decide to name it after the concept, too, given that a trademark for ‘Cyber X’ has also been filed.

London-based SAIC Design created the concept with plenty of eye-catching details, such as Magic Eye headlights that open when turned on, the Laser Belt line of LEDs along the side, and the squared-off Kammback tail. Leaked patent images reveal a production MG based on the concept is very much imminent, including plenty of the Cyberster’s design features. Our exclusive images above bring these leaks to life, showcasing what MG’s new roadster could look like in the metal. We can see it’s retained a version of the concept’s face, albeit a little less aggressive, with a small grille at the bottom of the front bumper and a long bonnet with plenty of creases and slashes that cascades into the nose. The Magic Eye headlights have been replaced with more conventional units. 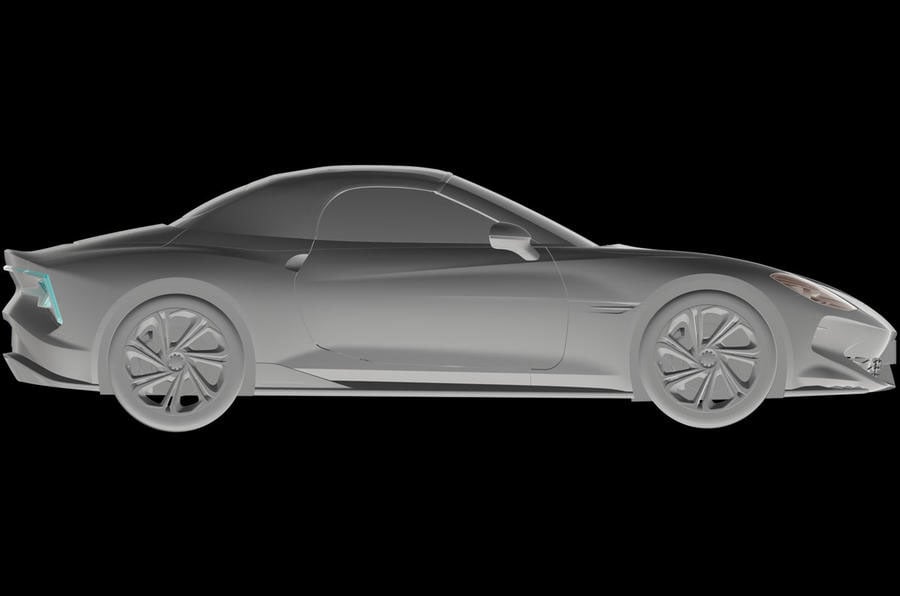 As on the Cyberster, the rear end of the new car features some outlandish brake-light design. However, whether or not the units resemble the British flag (like the rear lights on the current MINI) or gigantic arrows is up for debate.

The concept’s rear diffuser has shrunk, but the Kammback rear end remains. It gives the car a traditional profile, with proportions more akin to the classic MGB, rather than MG’s most recent convertible car, the TF.

Don’t expect to see the concept’s yoke-style steering wheel, but the centre console with integrated touchscreen, wraparound driver’s display screen and even the Zero Gravity floating head restraints could all make production. The driver-centric two-cockpit layout could also feature.

What’s less likely to be reflected in the production car are the concept’s 800km range and 0-100km/h time of less than three seconds. But that’s not to say the Cyberster won’t offer up impressive stats?

MG recently unveiled its Mulan hatchback for the Chinese market. This will go into right-hand drive production as the MG4 and is claimed to be capable of 0-100km/h in four seconds, but is yet to be confirmed for Australia.

It will be offered with rear-wheel drive on the SAIC Nebula pure-electric architecture, which would provide a perfect base for MG’s new sports car. Full specs for the Mulan have not been revealed, but some of its technology could transfer into the new roadster.

The sports car’s powertrain is likely to be geared for performance rather than efficiency. But its proportions should result in a lighter kerbweight than MG’s other EVs, so we expect it to at least match the 440km range of the ZS Long Range SUV. It will depend on how much underfloor battery can be packaged beneath the passenger cell while still keeping the car low, however.