A new small MINI electric crossover is due in a few years, and this concept gives a very strong hint of what the production-ready MINI Aceman could look like.

The next generation of models from MINI will form the brand’s most comprehensive and wide-ranging line-up ever, and a key part of the puzzle will be a new all-electric compact crossover sharing its underpinnings with the future all-electric MINI Hatch. Due in 2024, this important new member of the line-up has been previewed with a new concept: the Aceman.

The name sounds similar to the short-lived Paceman three-door small SUV, axed in 2016. However, MINI’s head of design, Oliver Heilmer, told Automotive Daily that the moniker isn’t a nod to the past but a clean break, as the new car will be the “ace in the pack.” It slots into an entirely new spot in the MINI line-up created by repositioning the Countryman, which will grow in size for its next generation to around 4.5 metres long. The Aceman will be slightly smaller than the outgoing Countryman, at just over four metres long, but the fully electric architecture the car will be based on – just like this concept – will maximise packaging to improve space inside despite its relatively compact footprint.

Technical specifications for the Aceman concept have not been detailed, save for shared use of MINI’s new all-electric platform for the next Hatch coming in 2023. That means that the Aceman will be built in China. Based on the limited details of what we already know about this new platform, two battery sizes and two power outputs could be offered. An entry-level car with around 135kW and a 40kWh battery for a claimed range of around 300km will form the basis of the line-up, while a more powerful car with 160kW with a 50kWh battery would look to target 400km from a full charge. 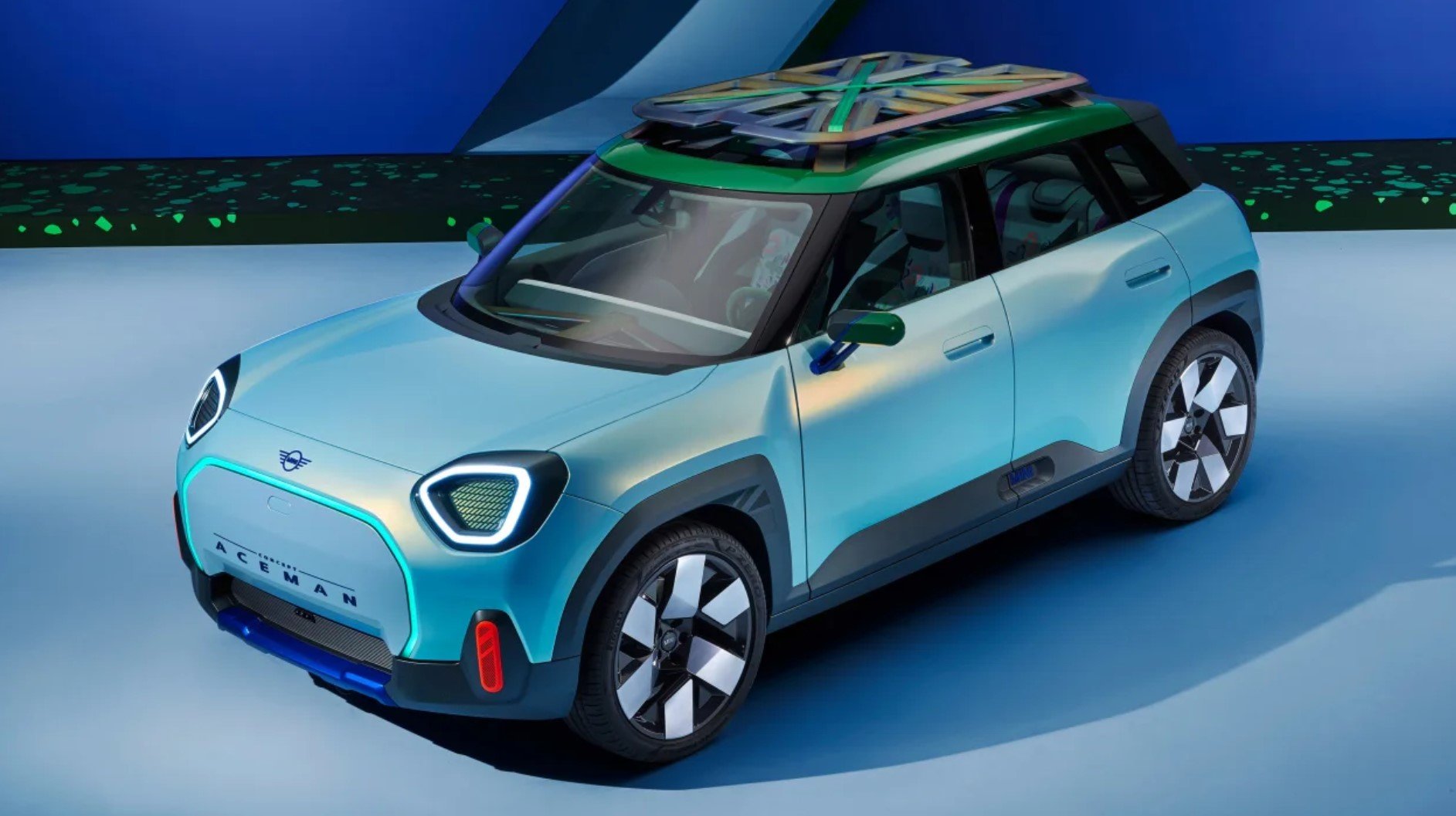 Instead of being a technical showcase, this is very much a concept car that details where the brand’s design language is heading and what the production Aceman will look like two years from now – and according to Heilmer, it’s more than 80 per cent complete.

“Since this is the new family member, it was clear for us that this will have a modern approach, it will break out of typical form language,” begins Heilmer, who talked Automotive Daily through the ins and outs of the Aceman’s appearance and brief.

Although similar in length to the soon to be discontinued MINI Hatch five-door, the Aceman concept is wider and taller, with a more SUV-inspired shape. A two-box profile with the wheels pushed right to the very extremes of the car’s body means the car’s overhangs are short, also making the most of space inside, and it’s onto this chunky silhouette that the new design language, called ‘Charismatic Simplicity,’ is projected. 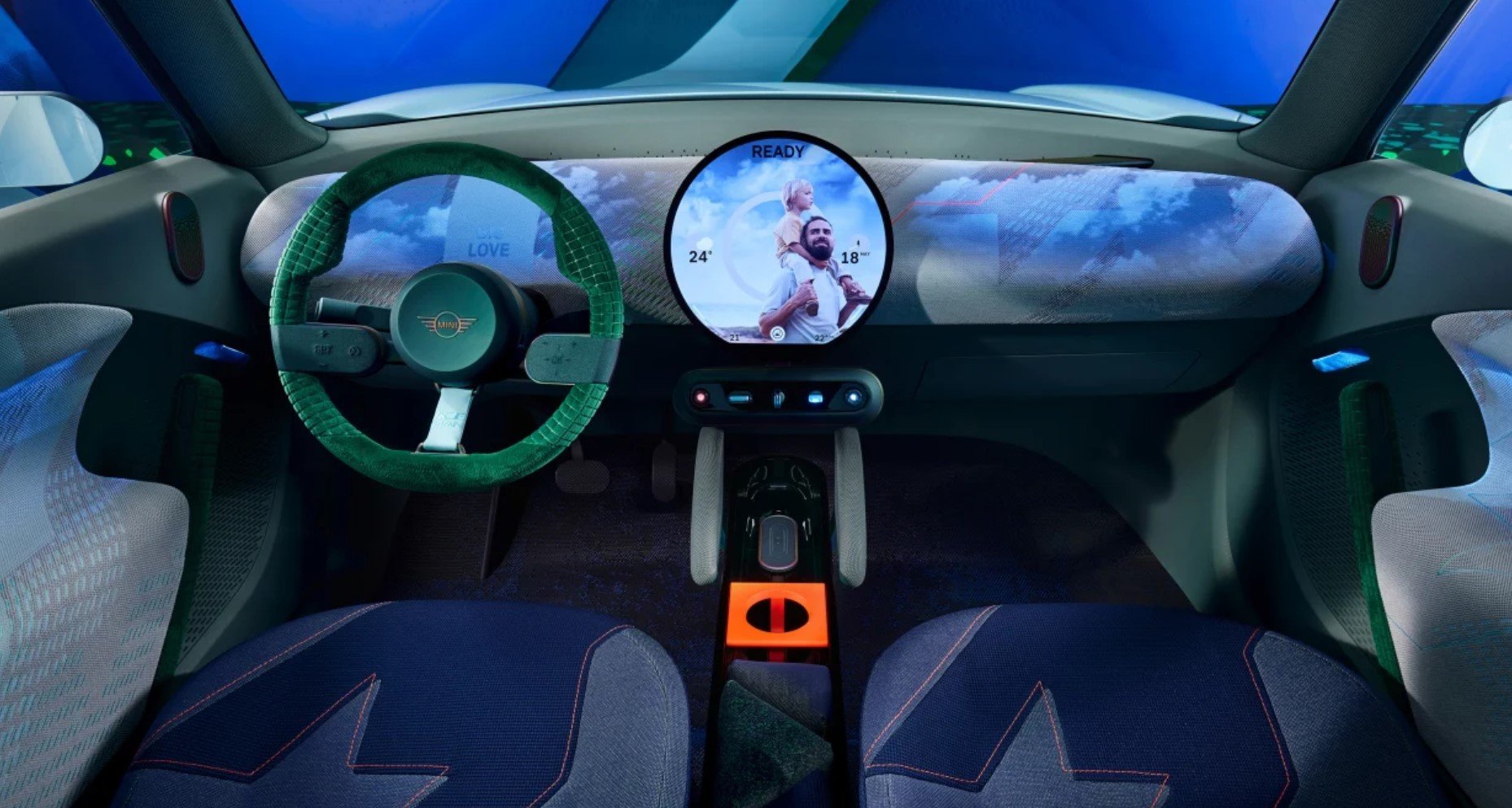 The front end of the car is where the Aceman diverts most significantly from current MINI design language, with a new face that’s designed entirely for the brand’s electric era. Most significantly, the headlights aren’t round, but Heilmer says that in many ways the new front is “more classic” than the brand’s current look, given the new octagonal frame grille element that’s illuminated in turquoise.

The red vertical elements emphasise the height of the car, we’re told, but they’re also home to a pair of external speakers – one of many concept car touches sprinkled throughout the Aceman. Another set is found in the rear valance.

The speakers give an audio welcome for the driver as they approach the car, but they’re also to draw attention to the new generation of sound design being created for the next-generation electric MINI models. “We are making every sound new. The driving sound, indicator, whatever, everything is composed specifically for the new MINI family,” Heilmer told us. “Even from its sound it will be recognisable as one of the new MINIs.”

Prominent and upright wheel arches create a tough look for the compact SUV, housing 20-inch wheels. A large roof rack is another nod to the car’s positioning as the brand’s new baby SUV, and it’s also home to a trademark MINI touch, with the brackets forming a Union flag-like motif.

At the rear, a clean look has been applied with little clutter, the compact tailgate sitting flush with the rear bumper wearing a MINI badge and Aceman lettering. “A MINI should have a good stance, that’s important,” says Heilmer, before teasing that a new level of customisation is in the offing for MINI buyers, a group traditionally keen on personalisation.

The use of colour is a massive part of MINI’s concept and newcomer model that will follow it. The Aceman’s pearlescent blue paint is combined with a British Racing Green roof, the car’s speaker elements are highlighted in red, and there’s also that turquoise frame and purple badging to take in. However, the car’s colour palette is even bolder inside the cabin.

As per MINI’s traditional approach, the use of space inside the Aceman concept is clever, maximising interior space so that the small car feels quite big inside from our early look around the car. There’s no leather or chrome inside, with various textile surfaces and iridescent metals used to create an eyecatching environment.

Alongside the unusual seat upholstery, the concept’s steering wheel is trimmed in green velvet velour. But alongside the fun, modern feel there’s a huge nod to the original Mini in the shape of the dashboard architecture and infotainment system.

“Due to digitalisation we are able to achieve it again,” says Heilmer. The Aceman features a single, round OLED infotainment screen in the centre of the dashboard, and in the concept it’s near-production-spec hardware.

Beneath it sits a small bank of switches, where the parking brake, gear selector, drive modes and volume control buttons are located, plus a power toggle interpreted as a modern-day take on the original’s turnkey. Placing these here frees up space for an adaptable centre console that runs from the car’s front area to the rear.

Another concept car touch is the inclusion of three “experience modes”, setting the theme for the infotainment unit and the dashboard as a whole. Toggling one of the modes reveals that the infotainment sprawls beyond the main screen, projecting across the entire dashboard.

The navigation can take up the whole surface, and a ‘charging game’ has been devised with projection technology. The goal is to successfully spell ‘Aceman’ across the dashboard using floating bubble letters, flung out of the screen and across the fascia with a swipe of the finger.

Tying in with the Aceman’s playful approach, the car will make its debut not at a motor show, but at a gaming convention. It will be shown in August at Gamescom 2022 in Cologne. The production version will likely break cover towards the end of 2023, before going on sale in 2024.